REVIEW: Who Are You in the Tarot? 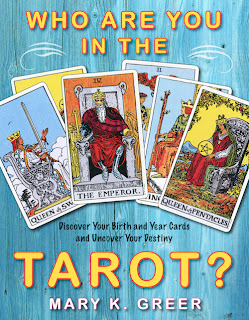 
"The tarot cards associated with your birth date and name form a pattern of personal destiny. They describe the theme of your life—the challenges and the gifts. In Who Are You in the Tarot?, popular tarot practitioner and astrologer Mary Greer connects astrology and numerology to the tarot to create an in-depth personality profile that anyone can use for self realization and personal harmony. Greer takes the reader on a very personal exploration of how the tarot can be used as a tool for learning more about themselves and others."


Mary K. Greer is a Grandmaster of the American Tarot Association and teaches workshops and classes on Tarot and astrology throughout the U.S. and abroad. She is the author of several books, including 21 Ways to Read a Tarot Card and Tarot for Your Self. This book is a revision of Mary Greer’s Tarot Constellations.

Who Are You in the Tarot? measures 7 inches by 9 inches. It is a paperback, with sturdy, glossy stock for the cover. Type is a nice size for reading and the pages are layed out attractively, with black-and-white illustrations, subheads, and white space breaking up the type. Paper is a good weight, not flimsy or thin. Blank charts are provided throughout the book so that you can write in your personal information (such as month, day, and year of birth), add the relevant digits, and arrive at a total. The book is illustrated with the Rider-Waite-Smith deck.

Contents include an Introduction and chapters titled:
1) Constellations, Principles, Archetypes, and Beliefs
2) Techniques for Working with Your Personal Cards
3) Your Birth Cards
4) The Tarot Constellations
5-13) Individual Constellations of cards/numbers
14) Your Year Cards
15) Interpreting Your Year Cards
16) Soul Groups and Relationship Dynamics
17) Your Name Cards
18) The People or Court Cards
Appendix A: The 8-11 Controversy
Appendix B: The Qabalah of the Nine Chambers
Appendix C: Summary of Card Names
Selected Bibliography

In the Introduction, Greer writes that the book "teaches two major concepts. One focuses on your nature, and the other on the nature of tarot." She goes on to discuss The Original Edition of the book (called Tarot Constellations), Tarot and Your Destiny, The 8-11 Controversy and Astrological Correspondences, How to Use This Book, and Researching Your Lifetime Card.

The charts contained in this book make handy references, especially the chart showing Alpha-Astro-Numeric Correspondences for the Major Arcana cards. Greer's writing style flows beautifully, and her writing is clear and concise.

I appreciate Greer's explanation (in both the Introduction and Appendix A) of the "8-11 controversy." By this, of course, she means the dilemma tarotists face concerning the Strength and Justice cards. In continental European Decks dating from the 17th century (e.g., the Marseilles-style), Justice is usually Trump 8 and Strength is Trump 11. In 1910 occult scholar Arthur Edward Waite designated Strength as Trump 8 and Justice as Trump 11 in his well-known Waite-Smith deck.  Greer's position is that both systems are valid. Who Are You in the Tarot uses Strength-8 and Justice-11.

The astrological associations used in this book are based on the Hermetic Order of the Golden Dawn (as in decks influenced by Crowley/Harris, Waite/Smith, and Paul Foster Case.)

When I first heard the term "Tarot Constellations," I thought it must be a system for associating constellations in the sky with Tarot cards. Instead, as Greer explains it, a constellation can be any grouping of objects, properties, or individuals. Greer's Tarot Constellations are made up of cards that resonate to the same theme, with each card giving a different perspective on that theme. Greer gives credit to Angeles Arrien for this concept. Each of us has a relevant Tarot constellation determined by our birth date.

Using this book, I made the following calculations based on my date of birth:

Again based on Greer's system, I find myself belonging to The Constellation of the Magician. In addition to The Sun, The Magician, and The Wheel of Fortune, I can count all Aces and Tens among my relevant cards. Greer writes: "Your association with one of the constellations based on your birth date described you in terms of the cultural beliefs of solar cycles. The characteristics described are general tendencies."

Our Year Card, as you might imagine, is based on our Month and Day of Birth, combined with the Current Year. For 2012, my Year Card is 9 - The Hermit. For the purposes of this system, the Year Card Cycle runs January to January in terms of events happening to us. The Birthday-to-Birthday Cycle refers to inner response and integration of the lessons of the year. Greer provides detailed a description and discussion of each Major Arcana card as a Year Card.

The Name Card system is given an equally thorough and clearly stated presentation by Greer. Naturally, Name Cards are determined by our birth name. Each letter has a card assigned to it. Greer offers two major methods for determining numerical equivalents for the letters of one's name. She has chosen the number of the 22 Major Arcana as the numeric base for use in her book.

Because each letter has a corresponding card, you can lay out your name in cards.
Moving beyond vowels and consonants, Greer introduces Musical Correspondences for the cards, as developed by Paul Foster Case. Using this system (or one you create yourself), you can "play your name" on a musical instrument.

Greer opens up the Court to include more than just the King, Queen, Knight and Page of traditional decks, acknowledging that many decks have other names and roles for the "people" of the Tarot. After covering the traditional associations, she explains how these cards can represent  stages in our psychological development and in the development of our skills, as well as personality types.

If you enjoy the idea of numerology, you will enjoy doing mathematical calculations to determine the various cards that apply specifically to you, whether based on your birth date or name. Greer's discussion of the Tarot Constellations is fascinating. If you like to combine astrology, numerology, and Tarot, you'll love this book.

If you are a Tarot beginner, this book might overwhelm you. I think you'll enjoy it much more if you have a foundation in Tarot that allows you to understand references to the 8-11 controversy (for example). I feel that it would be helpful to have a basic understanding of The Hierophant (for example) before trying to interpret what it means to have that card as your Personality Card or Destiny Card.

The "workbook" aspects of this book are a real boon, allowing you to compute and analyze your personal data on the spot, right in the midst of all the glorious information and inspiration this book provides. 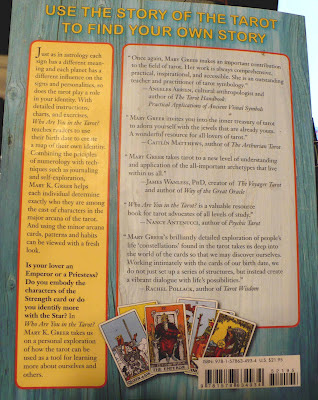 In accordance with the FTC Guidelines for blogging and endorsements, I hereby disclose that this product was provided by the publisher for free. Other than the occasional review copy, I receive no monetary or in-kind compensation for my reviews.  The substance of my reviews is not influenced by whether I do or do not receive a review copy.
on Monday, March 26, 2012