"Exquisite and powerful, if there is a theme in The Mary-el Tarot, it is one of the alchemy of the soul; of finding balance, symmetry, mastery of the self, and becoming your own genius. This long-awaited 78-card deck is stunningly illustrated with traditional oil paints and a depth of symbolism found in the old classics. The accompanying guide, Landscapes of the Abyss, takes the reader through the meanings of each card via the landscape of the Moon and the High Priestess, through the geometry of the temple and the Tree of Life, the Merkabah, and the caduceus! Enter a doorway between heaven and earth, between microcosm and macrocosm, between the world of eternity and infinity. A rare gem suitable for all levels of tarot experience." 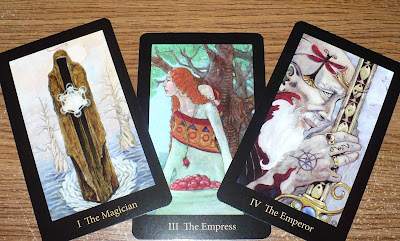 I suppose my review of this deck could consist of just one word: WOW. That would pretty much sum it up. However, this wonderful boxed set deserves more, so here we go.

In keeping with Tarot tradition, the 78-card Mary-El Tarot has of 22 Major Arcana and 56 Minor Arcana cards, including 16 Court cards.

The accompanying 192-page paperback book -- Landscapes of the Abyss -- is a treasure, not only because of the wealth of information included but because of the author's writing style and talent for describing the cards in an original, lyrical manner. Marie White expresses her love of mysticism, symbolism, words, and art in this deck, which she began to create in 1997.


The book contains the following sections: 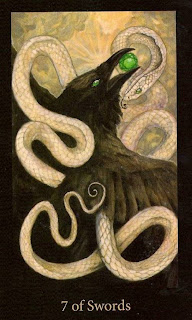 Part I - Introduction to Tarot

From the author: "The Mary-el Tarot is built on the three pillars of the Marseille, Rider Waite, and Thoth decks, in deep respect of their wisdom and tradition as well as this evolving iconography that has slowly come, as many works of art do, to reflect an inner truth that we humans carry inside us."

This deck uses the traditional cards titles and numbering system, with Justice as Trump 8 and Strength as Trump 11. For each Major, the book includes two or three pages of material, including a black-and-white illustration of the card, its number, title, Keywords (both upright and reversed), and Traditional Divinatory Meaning (both upright and reversed). Most of the Majors descriptions also incorporate a quotation. For example, under "III The Empress" we read, "If you judge people, you have no time to love them." ~ Mother Teresa of Calcutta. The discussion of The Hermit features a long quotation from Victor Hugo. For The Star, White has chosen to quote an Eskimo proverb: "Perhaps they are not stars, but rather openings in heaven where the love of our lost ones pours through and shines down upon us to let us know they are happy." 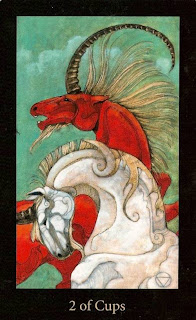 Suits are Wands, Swords, Cups, and Disks. As with the Majors, many (but not all) of the descriptions of the pips include relevant quotations. White goes bilingual in her quotation for the Three of Disks: "Es ist noch kein Meister vom Himmel gefallen. (No master craftsman ever just fell from the sky.") ~ German proverb. The book groups the cards by number, not by suit. In other words, we have pages for the Ace of Wands, Ace of Swords, Ace of Cups, and Ace of Disks, followed by the Two of each suit, and so forth. Each pip gets two to three pages of description, including title, Keywords (both upright and reversed), and Traditional Divinatory Meaning (both upright and reversed).

Looking for patterns, I notice that all four Aces feature hermaphrodite figures (the Ace of Swords isn't as obvious as the other three, but still could fit that profile). Three of the four Sixes feature figures with wings (angels?) If the figure on the Six of Wands has wings, I can't see them. In the suit of Disks, as one might expect, the colors brown and green are prominent. Wands pips tend to incorporate red, orange, gold, and reddish-brown. I do not see strong color similarity among Cups or Swords cards -- although there is more blue in cards from those two suits than in Disks or Wands. I look forward to hunting for more patterns! 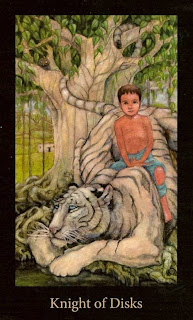 Court Cards in this deck have traditional names: King, Queen, Knight, and Page. Within this section, White provides a lengthy discussion explaining how she has arranged the deck around the zodiac (a brief explanation of the origins of astrology is also included here). To me, this discussion probably should have had its own section. It covers the whole deck, not just the Courts.

To the lightest element, Fire, White assigns the Fire sign Leo, the season Winter, the Lion, the Heart (Courage), Plasma, Yod, 1-Kether (Crown), Soul, and White Horse to the suit of Wands, The Magician, Strength, and all Pages (numbered 11, thus corresponding to Trump 1 [The Magician] and Trump 11 [Strength]). To the densest element, Earth, she assigns the Earth sign Taurus, the season Spring, the Bull, Strength, Solid, Heh, 4-Chesed (Love), Body, and Chariot (Throne) to the suit of Disks, The Emperor [Trump 4], Temperance [Trump 14], and all Kings (number 14). Notice that White is not using standard numerological "reduction" techniques here. She associates Pages (card 11) with Trump 1 and Trump 11, and associates Kings (card 14) with Trump 4 and Trump 14.

This brings us to the elements Air and Water. Here is where White breaks from the associations that I and many other Tarotists/Astrologers use. The discussion of astrological and elemental associations is followed by detailed information about the Court Cards. White notes: "Depending on context [a Court Card] can be you, another, or advice for you or another on how to deal with the energies and situations present in the other cards. . . I tend to see them as all aspects of our self." She describes each suit and what it represents (again, it seems that this information really belongs in a separate section). We then receive keywords for the Pages, Knights, Queens, and Kings. Each Court is given approximately one page, including a black-and-white version of the card, title, Keywords (both upright and reversed), Traditional Divinatory Meaning (both upright and reversed), and -- occasionally -- a quotation. 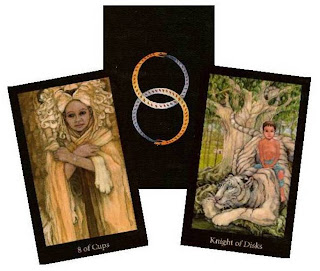 White offers the typical recommendations for reading with the Tarot, followed by a Daily Reading spread, Relationship spread, Yes or No spread, Past-Life spread, and Tetractys spread. I'm sure others have heard of the Yes-No method White presents, but it was new to me. Basically, you shuffle and lay out three cards. You then add together the numeric value of all three. If that value is an even number, the answer is Yes; if it's an odd number, the answer is No.

I find this statement interesting: "Something I always keep in mind is that the cards laid out, as they are laid out, are always right. No more cards are needed to clarify, what you need can be found in what is there."

Conclusion: "Lastly, there is no knowledge that can be found outside yourself that is better than what is inside yourself. You have access to it all (as does every person), alone; you are enough. . . Potential reality is wide; experienced reality is narrow and supports what is in your heart and mind."

Bibliography
This section is just over three pages of sources and resources related not only to Tarot but mythology, poetry, symbology, and spirituality.

Endnotes and About the Author can be found at the end of the book.

I can't say enough about the quality of Schiffer decks and books. An 11-3/4 x 6 x 1-7/8 inch sturdy, laminated gift box with a magnetic closure holds the set. Card stock is high-quality with a gloss finish.

The cards measure about 3-1/2  x 5-1/2 inches. That's too large for my hands to poker shuffle, but I prefer to use a push-pull shuffling method anyway, and that works just fine with this deck. The cards have rounded corners.

Each card is bordered in black. The number and title appears at the bottom of each card in light beige-gold text on black. If you cut off the borders, you will lose the card titles.

The backs of the cards are black with an ouroborus (ancient symbol depicting a serpent or dragon eating its own tail) interlocked with another ouroborus to form a lemniscate or figure eight. The serpent's bodies are half orange-yellow and half blue, patterned with red Yods. 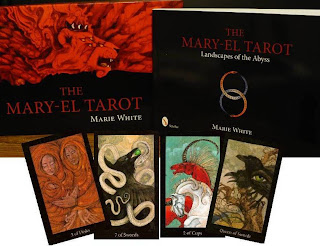 In the "About the Author" section of the book we discover that Marie White began creating art at a very early age, recording "the substance of dreams, visions, nature, and the human form." We are told that her favorite medium is "oil paint used in a method called grisaille, a technique also favored by the old masters, where thin layers of color are slowly built up bringing out the natural depth and luminosity of the paint."

I had planned to show my "favorites" of the cards in this deck on the blog, but there are way too many to do that! I think it's the blend of realism with fantasy that appeals to me most -- oh, and the gorgeous colors. White incorporates just enough detail to make the images worthy of exploration, without boggling the mind. I discovered (no big surprise) that most of my favorite cards feature animals (Never fear, this is not an "animal deck"). I also realized that most of my favorites are Court cards -- which is not the case in every deck I see.

Marie White is one of those amazing people who can not only create stunning, compelling works of art but also write with grace and skill. Her decision to build on the Marseille, Rider Waite, and Thoth decks could have led to a mish-mash of confusion, but this did not happen. Her detailed discussions of the cards in the accompanying book illuminate the symbolism and messages inherent in each card. Her descriptions are personal and beautifully worded, so that you feel she is talking to you personally -- not just reciting and explaining traditional meanings. And I love the quotations she has chosen.

If you are a Tarot beginner, you are probably not going to understand a lot of the references and connections White has made with this deck and book. At the same time, however, you can still get a lot out of both. As you continue with your Tarot studies, more and more will become clear to you, increasing your appreciation for this astounding set.