In these days of “Covid confinement,” I am not doing any literal “travel” – but that doesn’t mean I can’t take a journey of the mind and spirit. The itinerary for this voyage is provided by the Sacred Sites Tarot (Massimiliano Filadoro, Federico Penco / Lo Scarabeo).

The positions are simply indications of the stages of the trip – i.e., card (1) is the first stop on the journey. To decide how many places I am visiting, I am drawing a random card from the deck. Ah, the THREE of Swords. It seems there will be three stops on this trip. Let’s see where we go… 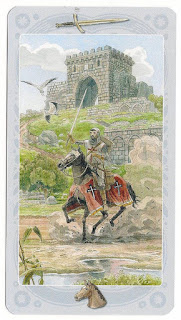 (1) The KNIGHT OF SWORDS takes me to Mount Tabor in Galilee, Israel.

“Although it is not named in the New Testament, Mount Tabor is the traditional site of the Transfiguration of Jesus. The first churches on the mountain were built in the 4th century AD. At the summit of the mountain there are a Franciscan church and hospice and a Greek Orthodox church. From atop the summit, there is a panoramic view of Upper Galilee. Ruins of crusader fortifications are numerous.” (https://www.britannica.com/place/Mount-Tabor)

I have never traveled to the Holy Land and don’t have a particular desire to do so. But I think perhaps I would find a visit to Mount Tabor to offer a powerful sense of history. 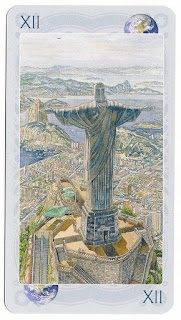 (2) Next stop: Rio de Janeiro, Brazil, courtesy of THE HANGED MAN, who invites me to visit Christ the Redeemer, a statue that stands about 38 meters (over 124 feet) tall according to the LWB for the Sacred Sites Tarot. Another source places the height of the statue at 98 feet/30 meters but in any case, it is one of the seven wonders of the modern world. Obviously this statue has tremendous religious significance.

One of the things I always think about is that some people say this was the inspiration for Paul McCartney’s song “The Fool on the Hill.” There are several other interpretations of the song, but I didn’t know about the statue until I read that explanation, so I tend to associate the two. 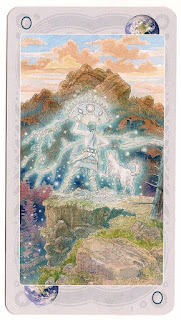 (3) Last stop: Speaking of fools, THE FOOL escorts me to my third and final stop on this trip: Mount Graham in Arizona, USA.

For generations this mountain has been a fundamental sacred site for the indigenous San Carlos Apache tribe. For astronomers from the University of Arizona, the mountain was a prime location for their new observatory. In 1990 the Apache Survival Coalition was formed to save the sacred mountain; however, in spite of their efforts, a telescope was erected and dedicated there in 1994. Some San Carlos Apache still place their trust in medicine men, who journey to Mt. Graham to look for healing herbs—special plants and plant parts that can only be found there—and to learn healing techniques from the mountain spirits. (Source: https://www.encyclopedia.com/humanities/encyclopedias-almanacs-transcripts-and-maps/san-carlos-apache)

Although I am not Native American, I still feel drawn to the culture and spiritual practices of many tribes. I enjoy reading the legends and visiting places that are associated with Native beliefs and folk lore. I lived for many years near Cherokee land in North Carolina.

This has been a fascinating trip! Stay tuned for more adventures with The Sacred Sites Tarot.