Sherlock Holmes Card of the Day: 3 of Observation

The Sherlock Holmes Card of the Day is:
THREE OF OBSERVATION
3 of Swords 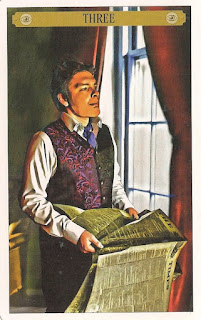 The Three of Observation depicts Holmes stares out a window into the streets of London. A newspaper in which he is accused of a blunder falls from his grasp. Here we see him during one of his struggles with moodiness and depression. The creators of this deck note that Holmes could be deeply affected by events, and he was keenly aware that there were times when his judgment could go astray. He remarked to Watson, “Once or twice in my career I feel that I have done more real harm by my discovery of the criminal than ever he had done by his crime.” (The Adventure of the Abbey Grange)

I find this to be a highly appropriate representation of the Three of Swords, which refers so often to a state of mind or perception that we have that might need to be explored or brought into perspective.

The Holmesian Wisdom for this card is a quote from The Naval Treaty: “The most difficult crime to track is the one which is purposeless.”

Keys for this card, upright, are: “sorrow, separation, loss, deep disappointment, possession of thoughts by jealousy, analysis of your receptivity to events.” Reversed, the card can suggest “alienation, quarrel, disorderliness, mistakes.”

Examples from “The Game” for the Three of Observation: “personal troubles. . . brooding upon personal slights. . . bereavement following the loss of a partner or friend.”  Examples from “The Fog”: “denial that anything is wrong. Enjoying melancholia and letting it feed your creativity… Painful truths are revealed… A disaster is narrowly averted.”
on Thursday, July 21, 2016