Listen to the Animals: Opossum

Today I am consulting the _Power Animal Oracle Cards_ by Steven D. Farmer, Ph.D., with illustrations by Eric Nesmith. 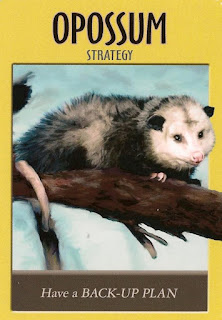 The opossum is such an interesting creature, reviled by many due to its rat-like tail, beady eyes, and propensity for eating trash. I can tell you from personal experience that when you catch one by surprise and it hisses at you, showing its teeth, you want to remove yourself from its presence immediately!

In spite of all this, one of my friends who is involved in animal rescue has taken in baby opossums on more than one occasion, even letting them sleep with her in her bed. (They are kind of cute as babies…)

I was amazed to learn that there are more than 60 different species of opossum, the most notable being the Virginia opossum or common opossum, the only marsupial (pouched mammal) found in the United States and Canada.


A popular expression, “Playing Possum,” comes from the behavior of the Virginia opossum, who can appear to be dead when threatened. This is not something it consciously chooses to do. Rather, because of the stress of an imminent threat, the opossum instinctively goes into shock and enters a comatose state that can last from 40 minutes to four hours. (Opossums are not the only animal to do this. The ploy may put a predator off its guard and allow the prey animal to make its escape.)

Dr. Farmer chooses to relate the opossum to having a “Plan B, or at least a few other approaches to the subject of your inquiry.” He notes that it is important to listen to your inner promptings in order to become aware of options that were not obvious at first.

I will go with that, but I also think when the opossum is your “power animal” it may bring you the ability to know when to “play dumb” or “play dead.” The best response to a threat is NOT always to fight back, talk your way out, or immediately try to escape. I can see a certain advantage, in some situations, to simply remaining silent and waiting for your moment to make a move.