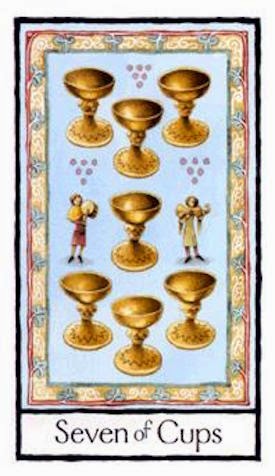 Now the Old English Tarot’s depiction of the Seven of Cups at first had me wondering how one would interpret it. Unlike the obvious depiction in the Rider Waite and many other modern decks of seven cups all holding different things, the Old English has none of that. We know from, let’s say, the Rider Waite deck that depiction speaks of imagination, or too many choices or even fantasies.

As I look at the Old English card I’m suddenly reminded of the famous dialogue about the “vessel with the pestle, the chalice from the palace” that appeared in the 1955 movie starring Danny Kaye called The Court Jester. (You can find the dialogue HERE.) It was all about choice.

Here in this depiction we have seven chalices spread evenly across the card. To each side of the middle chalice stands a figure playing an instrument. Each plays something different to the other. They obviously chose their instruments. However, even though there are seven cups for them to choose from, right now they both choose to stand by the same cup. Is that a wise choice I wonder? Are they under some illusion that they can both have the same thing?

I admit that with the visual of this card it’s not so easy to see what it may mean, but I definitely feel that choice is the fundamental meaning. So when it comes down to it, it really doesn’t differ too much from the meanings associated with the Rider Waite card. If the figures are not focused enough to see the reality of their situation and each chooses a cup that will work for them, then perhaps the card tells us that their desires and goals will just remain a fantasy rather than something real.