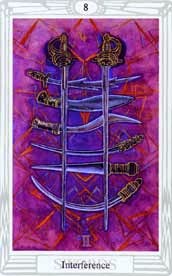 For Crowley and the Order of the Golden Dawn, the Eight of Swords is linked with Jupiter (geniality, optimism) and the sign Gemini (a mutable Air sign known for being intellectual).

Crowley titles the card "Interference" and notes "It is simply the error of being good-natured when good-nature is disastrous.” He writes: “Good fortune, however, attends even these weakened efforts, thanks to the influence of Jupiter in Gemni, ruling the Decan. Yet the Will is constantly thwarted by accidental interference.”

Hajo Banzhaf and Brigitte Theler (in Keywords for the Crowley Tarot) describe the energy of the card as: "High goals (Jupiter) that are threatened by doubts and inner conflicts (Gemini).” 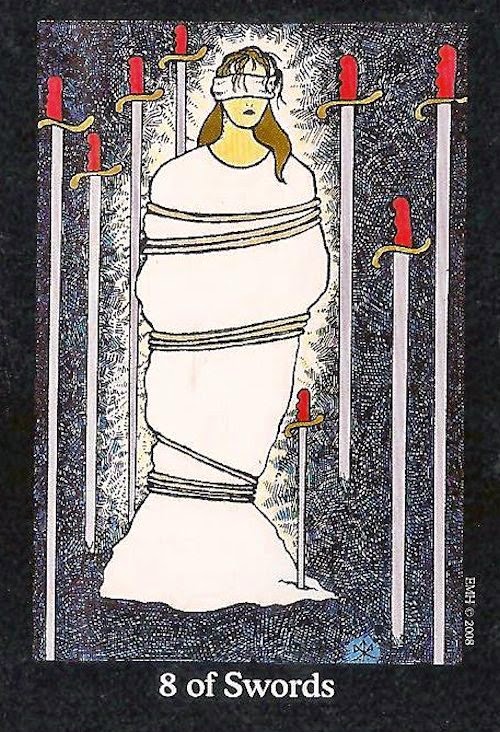 Liz Hazel's astrological associations for the Eight of Swords align with those of Crowley and the Golden Dawn: Jupiter/Gemini. Hazel's DMs for this card include: "frustration, an inescapable situation, confinement, must develop new strategies and attitudes to exit." Ill-dignified DMs include: "imprisoned, confined by illness, guilt complexes, arrested development, misunderstood mental problems.” 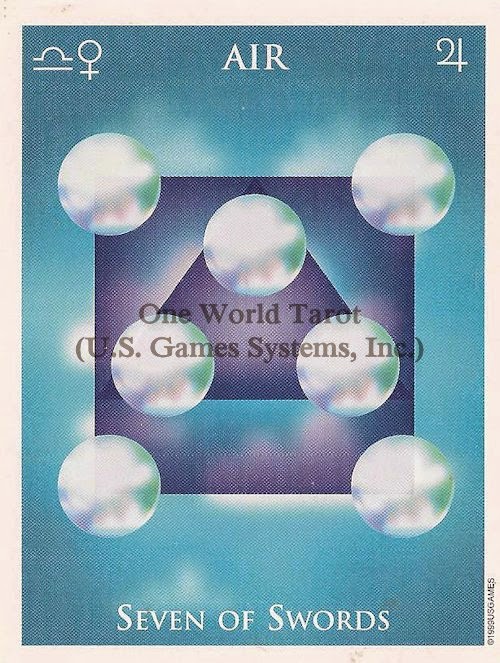 Crystal Love associates the Eight of Swords with the first subdivision of Aquarius (natural ruler Uranus; subruler Venus). She writes: "The humane nature of Aquarius is blessed with the presence of Venus in the first subdivision. . . This card may also indicate the unpredictable” She notes the following "Traditional Interpretations": "Highly intelligent, inquiring mind. Resourceful. Indicates intellectual study. Opportunities must be grasped.” 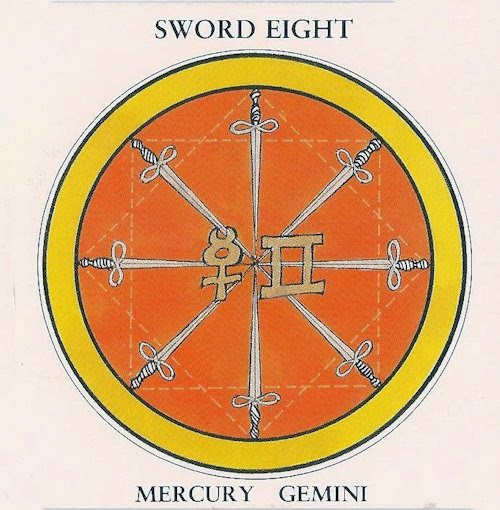 Mann's divinatory meanings for the Eight of Swords: "A continual love of variety and constant change can create beneficial work situations if enough concentration is applied. Mental originality with difficulty in focusing on practical applications." Reversed: "Too much complexity creates confusion, stress and sudden outbursts of anger. Accident prone and inconstant.” 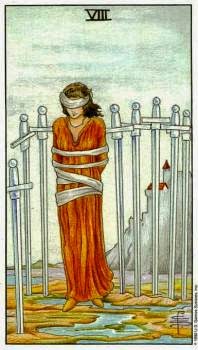 _David Thornton_ associates the Eight of Swords with the placement of the planet Mercury in the Third House (House of Environment and Perceptions, Communication, Siblings, Short trips). The Third House in astrology is associated with the sign Gemini.

Thornton's description of the energy of the Eight of Swords is: "Versatile thinking, adaptability, a love of variety and change, lack of constancy, honesty or tidiness.”

Anna Cook associates the Eight of Swords with the first decan of Gemini. In Cook's TD system, Subject Card Eight signifies "Future Renovation." The key word for the suit of Swords in this system is Challenging, which gives us Challenging/Renovation for the Eight of Swords. Cook notes: “There’s some extra work, or news coming your way that could upset your day, preempt your agenda, and lead you to feel momentarily, ‘bound and tied’ by circumstances that you can neither prevent nor control.”

Thierens associates the Eight of Swords with "the energy of the element of Earth on the Eighth house (the house of death and of the greatest difficulties of life, the inner problems and sex).” He notes: “The image on this card may well indicate the blindness of man amidst the dangers of this world and of his own desire-nature.”

(Note: If you are interested in learning more about this system put forth by Thierens, I recommend the book referenced above.)

In summary, for the Eight of Swords we have:


According to Arthur Waite (Pictorial Key to the Tarot / Weiser), the Eight of Swords “is rather a card of temporary durance than of irretrievable bondage.” The Rider-Waite-Smith card shows “a woman, bound and hoodwinked, with the swords of the card about her.” Waite’s DMs: “bad news, violent chagrin, crisis, censure, power in trammels, conflict, calumny; also sickness.” Reversed DMs: “disquiet, difficulty, opposition, accident, treachery; what is unforeseen; fatality.”

From an astrology standpoint, Jupiter is in its detriment in Gemini. In other words, Jupiter’s expansive, generous, optimistic nature is dampened by Gemini, a sign known for being detail-oriented and for “over-thinking.” Jupiter’s desire to look at the “big picture” is thwarted in Gemini. Hazel’s keyword “frustration” certainly applies.

A Mercury/Gemini combo would seem to be desirable, given that Mercury rules Gemini. It is difficult for me to associate such a favorable combination with the traditional RWS image of the “bound and hoodwinked” woman. Indeed, Mann speaks of “a continual love of variety and constant change,” neither of which seem to fit the traditional image. His keywords for the reversed card – confusion and stress – seem more appropriate.

If nothing else, the information I gathered on the astrological associations for the Eight of Swords clearly shows the wide range of possible interpretations, based on one’s preferred system.
on Tuesday, October 07, 2014