Journey Through My Decks: 4 of Earth

For this entry in my Journey through My Decks series I am using Tarot of the Spirit by Pamela Eakins, Ph.D., and Joyce Eakins, M.F.A. (U.S. Games Systems, Inc.) 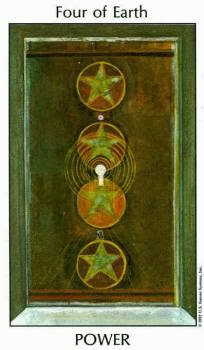 In Tarot of the Spirit, the four suits represent the four major components of human life: spirit, emotions, intellect, and body. The suit of Earth (comparable to the suit of Disks or Pentacles) represents "Wood, Metal, Bone, and Stones; Celestial Orbs; Stars and Planets; Moons; The Body, Birth and Death; The Dark of Midnight; The Sacred Year in Winter's Dream; Browns, Russets and Green Things; Deer, Bear, Boar, and Bull; Burrowing Snakes making caverns in Earth. . ." (Pamela Eakins)

In the Tarot of the Spirit Companion Book (Samuel Weiser, Inc.), Pamela Eakins tells us that Earth is "inert form, female and receptive, providing a body for the forces of intellect, emotion, spirit, will and lifeforce." On the path through Earth, "we learn that it is mostly the structures we, ourselves, erect that fall down and hurt us when Earth quakes. We learn to building our foundation upon the most solid and enduring ground."

The Four of Earth depicts four encircled pentagrams on a door which has been barred at the top and bottom from the inside. This is meant to give us the feeling that we are standing inside a room -- the room of material acquisition and success. Notice the radiating keyhole which leads "to the next level of development." The ten golden circles surrounding the keyhole represent the ten spheres on the Tree of Life.

This card asks us to examine how power affects us. Once we have gained power, we may find ourselves spending considerable energy protecting and maintaining it. Guarding against other people separates us from them, yet we need other people. Acquisitions can become a burden. We may lose our sense of what brings true satisfaction. We are encouraged to ask ourselves what reality we want to project out to the world, and to realize that we are citizens of the universe.

* * * * * * * * *
About the deck: In her Acknowledgments section, Pamela Eakins writes: "The Tarot of the Spirit is meant to pick up where other tarots leave off. It has come to us to aid serious students on the esoteric path of the Western mysteries. Its reason for being is to provide assistance for inner awakening and continued spiritual practice." She further states in Chapter 1 that "The objective of working with tarot . . . is to attain a sublime integration of internal contradictory elements in order to transcend conflict or conditioned response patterns and move into a state of inner peace and a deep awareness of our true identity."

* Book T, The Tarot, Comprising Manuscripts N, O, P, Q, R, and an Unlettered Theoricus Adeptus Minor Instruction. A Description of the Cards of the Tarot with their Attributions; Including a Method of Divination by Their Use. A public domain manuscript.
on Tuesday, January 07, 2014