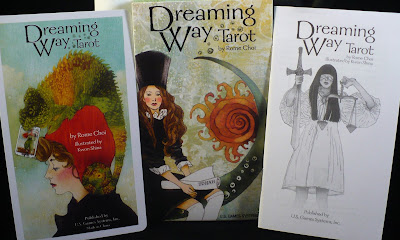 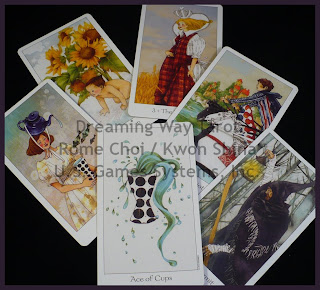 Put the words "dream" or "dreaming" in the title of a Tarot deck and you immediately have my attention. I could tell from online images that the illustrations would not be the abstract "dreaming mind" sort of thing. That's because they don't depict dreams. The title of the deck comes from the fact that the characters of the tarot came to author Rome Choi in a dream.

The art is beautiful and works well as Tarot in most cases, although some of the cards include oddities that are difficult to interpret. Unfortunately, the little white book (LWB) does not make any effort to explain these oddities, which could make it difficult for a reader to use these cards with clients. Personally, I love the oddities -- objects on people's heads, long pointy shoes, the plaids and checks and polka dots. So many of these cards make me smile.

I was intrigued by Rome Choi's "Characteristics of Suits" and "Characteristics of Numbers" in the LWB. Much of what he writes is similar to what I have heard before, but his way of putting things is sometimes refreshingly different. For example, under the number 2, he writes: "Pentacle means earth. If you find the answer to the question, '"What will happen when two lumps of earth meet together?', you can understand what pentacles mean. The answer is that nothing will happen. Therefore it has the meaning of sustaining. The meaning of other suits can be found in this way."

Readers who are familiar with the Rider-Waite-Smith deck can use this deck successfully without a lot of preparation. Beginners might stumble over some of the images that don't correspond readily to the RWS. 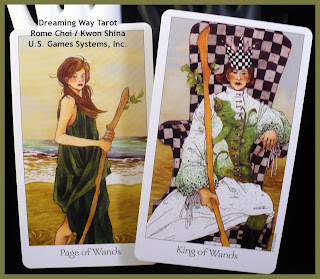 Author Rome Choi has been professionally involved with tarot since 1997, both in teaching and reading for others. The characters of tarot came to Rome Choi in a dream, thus he named this deck Dreaming Way Tarot. Illustrator Kwon Shina, who began her artistic career in 1997, has contributed artwork to comic books, film posters, calendars, novels, and advertisements.

The deck is modeled after the Rider-Waite-Smith style: 22 Major Arcana cards and 56 Minor Arcana cards, including 16 Court cards (Page, Knight, Queen, and King). The suits are Wands, Cups, Swords, and Pentacles. Strength is Trump 8 and Justice is Trump 11. 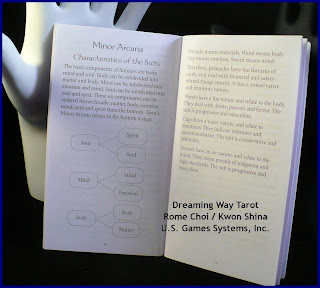 A 39-page LWB (Little White Book) accompanies the deck. For the Majors, we are given a paragraph about the card followed by Upright and Reversed divinatory meanings. Choi tells us that "reversed" does not indicate the opposite meaning of "upright." Instead, "Reversed cards show different degrees of the same condition."

For the section on the Minors in the LWB, Choi begins with "Characteristics of the Suits," which features a diagram showing that the basic components of humans are body, mind and soul. He notes that "Pentacle means materials. Wand means body. Cup means emotion. Sword means mind." Pentacles are linked with the element Earth, Wands with Fire, Cups with Water, and Swords with Air.

Following the suit characteristics we have "Characteristics of Numbers" in which Choi explains that "each number of the Pip cards has its own unique nature just as the suits do." The Page, Knight, Queen, and King are included in this section on numbers.

Beginning with Pentacles, the LWB gives us keywords for each suit followed by a paragraph discussing various aspects of that suit, followed by Upright and Reversed meanings for each card in the suit. 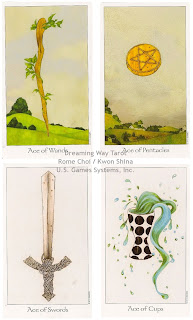 The cards are 2-3/4 inches by 4-3/4 inches. The card-stock is sturdy. Although the cards bend forward easily, they are stiff when bending backwards. For that reason, I recommend a push-pull or side-to-side shuffle with this deck.

Card faces have a 1/4 inch white border. Within that border, the images are framed by a thin black line. Titles are centered at the bottom of each card in black type. For the Major Arcana cards we are given the number and title. For the Minor Arcana and Court Cards, we have the number and suit written out (e.g., Three of Pentacles, Queen of Pentacles).

Let's get the card backs out of the way first. I am not attracted to the wavy green background or the vertical lines of ovals in puce, yellow, brown, and blood red. The backs are reversible. 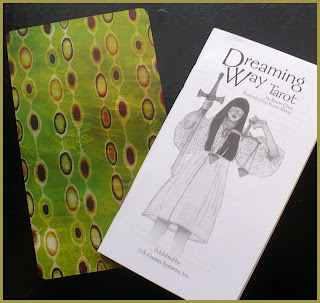 Many of the illustrations are modeled closely on the RWS, but many of them are not. For example, the Three of Pentacles shows a woman in what appears to be a long white shirt-dress. An open bag lies on its side on top of her head. Three coins are falling out of the bag. The High Priestess wears white stockings, green shoes, a black dress, and a tall black hat. She sits on a green crescent moon, holding the Torah in her lap. The Aces feature the suit marker centered on the card, without the traditional RWS hand reaching forth from a cloud.

Black and white polka dotted patterns feature prominently in the Cups cards. Checked patterns in various colors appear frequently in cards from all four suits. Swords cards have a lot of gray, white, and beige in them. Pentacles are much more brightly colored in general, using a lot of purple, green, red, and orange. In addition to polka dots, the Cups cards share a more muted palette than the Pentacles. Wands are brightly colored for the most part. The colors on the Majors are largely deep, rich, and bright, with the exception of Justice and The Tower.

The style of the art is realistic (in that human beings look human) yet there is a strong fantasy element as well.


In accordance with the FTC Guidelines for blogging and endorsements, I hereby disclose that this product was provided by the publisher for free. Other than the occasional review copy, I receive no monetary or in-kind compensation for my reviews.  The substance of my reviews is not influenced by whether I do or do not receive a review copy.
on Friday, April 05, 2013