Journey through My Decks: Queen of Cups (by Zanna)

In this series of posts, I plan to discuss all of the Tarot cards in order, using a different deck for each card. Today I'm exploring the QUEEN OF CUPS from the Rider-Waite-Smith deck*. 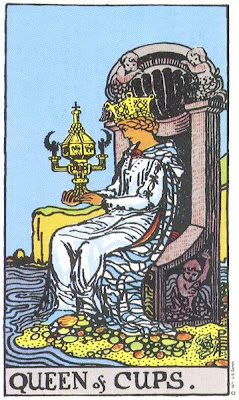 Who is this lady seated at the edge of the sea? Water nymphs decorate her throne. Small rocks, polished smooth by the relentless waves, lie at her feet. She is dressed in the colors of the sea -- light blue like the water and white like the foam that rides the crest of the waves. In contrast, a red shell fastens her cloak, which seems also to have red lining. In her hands she holds an object that appears to have her full attention. It resembles a ciborium (a covered receptacle for holding the consecrated wafers of the Eucharist in Christian churches). Winged angels decorate the handles of this impressive container, which can be seen as a representation of the Holy Grail.

In The Tarot: A Key to the Wisdom of the Ages (Macoy Publishing Company), Paul Foster Case tells us that the Tarot Queens symbolize Soul, the inner "pattern" part of a particular human personality.

The Queen of Cups gazes intently at the ornate chalice, symbol of her power. The chalice is closed, its contents concealed from the general public. This Queen is similarly contained and introspective. She is unlikely to reveal all of herself and maintains an air of mystery, like Scorpio, the zodiac sign sometimes associated with this card.

In The Pictorial Key to the Tarot (WeiserBooks), Arthur Waite describes the Queen of Cups as "beautiful, fair, dreamy - as one who sees visions in a cup." He adds, "She sees, but she also acts, and her activity feeds her dream."

Divinatory Meanings (from The PKT): "Good, fair woman; honest, devoted woman, who will do service to the Querent; loving intelligence, and hence the gift of vision; success, happiness, pleasure; also wisdom, virtue; a perfect spouse and a good mother." Reversed: "The accounts vary; good woman; otherwise, distinguished woman but one not to be trusted; perverse woman; vice, dishonour, depravity."

In his book Thinking Tarot (Simon & Schuster), Edward A. Aviza sums up the disparities between the upright and reversed meanings: "She is both the good mother, lover, wife, and so on, as well as the unfaithful woman who falls into a relationship because she is overwhelmed by feeling and passion."

Intuitive, nurturing, and receptive, the Queen of Cups calls our attention to both the positive and negative possibilities inherent in emotional involvement.