A Journey through My Tarot Decks: The Magician

In this series of posts, I plan to discuss all of the Tarot cards in order, using a different deck for each card. I am using my decks in alphabetical order.

This week's card is The Magician from Tarot of the Animal Lords (idea and graphics by Pietro Alligo; artwork by Angelo Giannini; published by Lo Scarabeo). 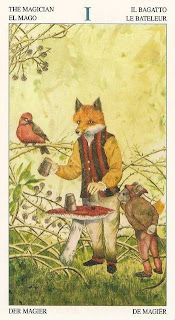 This unusual deck places the Fox on The Magician card. The author of the accompanying "Little White Book", Bepi Vigna, offers the following keywords for the card: "shrewdness, will to succeed, lack of prejudice, errors, lies." (The italicized words apply to a reversed or ill-dignified card.)

We can see that the fox on the card is doing some sort of "sleight of hand" trick for onlookers, including a plump red bird and a mouse.

The Fox's image as a sly, keen-witted trickster is almost universal, which ties in nicely with the Tarot Magician's relationship with Hermes (Mercury), described by Robert Place as "the god of gamblers, travelers, storytellers, dice, merchants, alchemists, magicians, liars, and thieves."

Ted Andrews, in his Animal-Wise Tarot, also puts the Fox on The Magician card, listing several Fox qualities that we might consider in our exploration of card: ability to conceal itself ("quiet invisibility"), keen sense of smell and hearing (heightening of all senses), awareness of possibilities and opportunities that comes from trusting one's instincts.

So while this Magician departs from the Rider-Waite-Smith model, we still see vestiges of the oldest Tarot traditions in the "trickster" association.
on Tuesday, May 11, 2010