A Journey through My Tarot Decks: The Empress

In this series of posts, I plan to discuss all of the Tarot cards in order, using a different deck for each card.

This week's card is The Empress (Trump III) from the Bruegel Tarot (artwork by Guido Zibordi Marchesi; idea and graphics by Pietro Alligo). 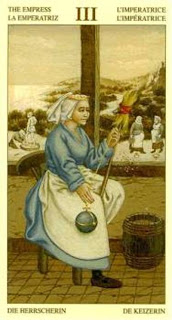 Keywords: "Rule with gentleness. Fertility."
Proverb: "More flies are caught with a drop of
honey than with a barrel of vinegar.
(A few just things are better than many wrong ones)."
The Little White Book for the Bruegel Tarot offers only a few lines about each card, including keywords and a proverb or saying for each.

Although The Empress in this deck wears a crown, it is a modest crown, and that is really the only thing about her that implies royalty. She is dressed more like a milkmaid than a sovereign. Between her knees she holds what appears to be a homemade broom B straw tied with red binding to a stick. This seems clearly to be a reference to male energy which, after all, is usually needed to create "fertility." A similar broom can be seen sticking out of a window in the upper left corner of Pieter Bruegel's famous painting Netherlandish Proverbs.

In her hands, The Empress holds a globe with a cross on it, a common feature of Bruegel's paintings. When the cross points downward, it can be seen as conveying "the world turned upside down" (everything is the opposite of what it should be). However, on The Empress card, the cross is pointing up. A saying that comes to mind is "to have the world on a string," meaning to have everything going your way. The planet Venus, associated with The Empress in Book T, is known as "the lesser benefic."

Beside The Empress sits a barrel, which could be viewed as another symbol of female as "receptacle" or "container."

Out the window on this card we see a couple of interesting scenes. In one case, two women both of whom appear to be pregnant, stand facing each other. One holds a circular object; the other holds a triangular object. On the ground in front of one is the symbol for male (or the planet Mars); on the ground in front of the other is the symbol for female (or the planet Venus). This emphasizes the association of The Empress with fertility. Also out the window we see a woman on her knees who may or may not be washing a man's feet.

The Empress wears blue (a color commonly associated with spirituality, the unconscious, tranquility, truth, thoughtfulness) and white (commonly associated with purity, healing, innocence). These colors of "Air" remind us that Venus rules Libra (an Air sign) as well as Taurus (an Earth sign). Brown Earth tones are also prominent in the card.

About Bruegel and the deck: Inspired by the world of Pieter Bruegel and his painting style, Guido Zibordi Marchesi created the images that appear in the Bruegel deck. Each card is given keywords as well as a popular saying or biblical allegory as a theme (a literal translation is provided "in order to let the reader sense and appreciate the connection between the words and the image.") Bruegel was born in Holland around 1525 and died in Belgium in 1569. He specialized in portraying scenes from nature and country life as well as Biblical scenes and parables.