I continue my astrological exploration of the Major Arcana with Trump 16, The Tower. The use of astrological associations with Tarot is completely up to the reader. This is merely intended to be interesting and fun. 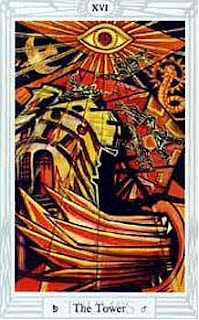 Thoth Tarot by Aleister Crowley
Crowley attributes The Tower card to the planet Mars and writes: "In its simplest interpretation it refers to the manifestation of cosmic energy in its grossest form." Book T also associates Trump 16 -- "The Blasted Tower" -- with Mars, titling the card "The Lord of the Hosts of the Mighty." In their book about the Thoth deck, Banzhaf and Theler describe Mars applied to The Tower as "combative, destructive, rousing force." 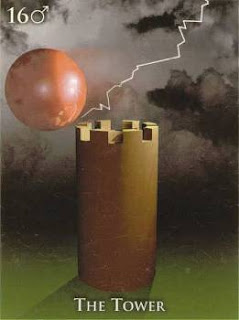 One World Tarot by Crystal Love
In this deck, Crystal Love also associates The Tower (Trump 16) with the planet Mars. She writes: "The tower represents the human body, and the red sphere symbolizes the head, which Aries rules." The zodiac sign Aries is ruled by Mars, as is the sign Scorpio. Love adds: "Mars, traditionally the god of war, is strong, daring and brave, but can also be violent and cruel -- qualities shared by Scorpio whom Mars co-rules with Pluto. . . Dangerous is unleashed without wisdom, Martian energy should be used carefully and wisely so as not to mishap upon oneself or others."

A.E. Thierens, PhD. (Astrology & the Tarot)
Thierens associates Trump 16, The Tower, with the planet Uranus, commonly known as the planet of change and upheaval. Thierens writes: "The stone tower struck by a flash of lightning is another version of the legend of Ouranos [Uranus] mutilating his son Chronos, which means, that Heaven is not content with a body of fixed dimensions and form, nor any heavenly force with the limitations put to it by physical authorities or architects." 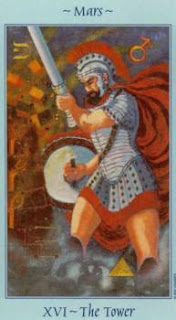 The Celestial Tarot by Brian Clark
Clark titles The Tower card "The Will of Mars." He writes: "In Celestial Tarot, we meet Mars the war-god, both destroyer and tower of strength. . . Sacrifices were made to Mars to avoid natural calamities, promote a bountiful harvest, and encourage prosperity. In classical astrology, Mars is lord of two zodiacal spheres, Aries and Scorpio, reflecting the dual paths evident in the Tower. Aries heralds spring and represents the renewal of life. . . Scorpio is the season of autumn when nature dies and goes underground." For Clark, Mars represents "aspiration, courage, enthusiasm, energy, and will. . . brute strength and aggressive instincts." 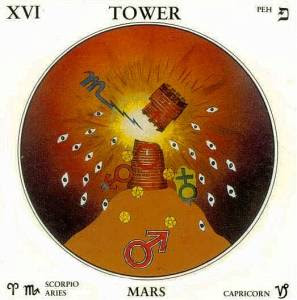 The Mandala Astrological Tarot by A.T. Mann
Mann associates Trump 16, Tower, with the planet Mars. He writes: "Mars shows that keeping tension inside leads to forced changes in one's condition as the urge to change the world starts with oneself. Scorpionic strength is created through unavoidable difficulties." Characteristics Mann associates with Mars include "will, desire, energy, enthusiasm, temper, arrogance, passion." 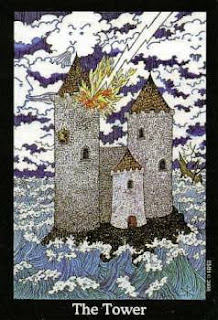 The Whispering Tarot by Liz Hazel
For The Tower, Liz Hazel lists the Golden Dawn attribution of Mars but notes "Pluto and Uranus are also used." Her DMs include "an abrupt or unexpected event. . . upheavals, rude surprises, accidents. . . inexorable change. . . erupting awareness. . . breakthroughs and breakdowns."

We see a strong preference among this group of Tarot writers for using Mars as the astrological attribution for The Tower. With the exception of The Whispering Tarot, every card is dominated by the color red, the color of Mars. Other astrological influences include Pluto and Uranus. I can readily accept the idea of Pluto (typically associated with death and rebirth) and Uranus (change and upheaval) as attributions for The Tower along with Mars.