I continue my astrological exploration of the Major Arcana with Trump 13, Death. The use of astrological associations with Tarot is completely up to the reader. This is merely intended to be interesting and fun. 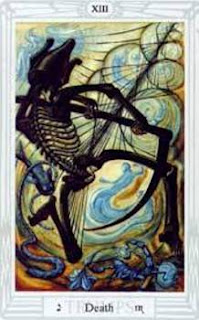 Crowley attributes this card to the zodiac sign Scorpio, as does Book T, which titles it "The Child of the Great Transformers: the Lord of the Gates of Death." Crowley describes the sign Scorpio as "one of the two most powerful in the Zodiac" (the other is Leo). Crowley goes on to say that Mars, ruler of Scorpio, is "the planet of fiery energy in its lowest form, which is therefore necessary to provide the impulse." The Death card also incorporates a skeleton and scythe, which are associated with the planet Saturn (representing "the essential structure of existing things"). The fish -- representing resurrection or re-incarnation -- is sacred to Mercury, the guide of the dead. Crowley sums up his description by writing: "This card must then be considered as of greater importance and catholicity than would be expected from the plain Zodiacal attribution. It is even a compendium of universal energy in its most secret form." 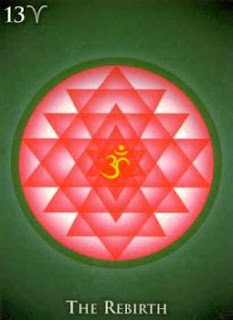 In this deck, Crystal Love departs from occult tradition by titling Trump 13 "The Rebirth" and associating it with the zodiac sign Aries (ruled by Mars). She writes: "Aries is the first sign of the zodiac. It symbolizes new beginnings, new cycles, and the beginning of a new astrological year." Love altered the title of the card because "the Rebirth card reminds us that in life, at a spiritual and cellular level, nothing ever actually dies, but is transformed and reborn."

Thierens associates Trump 13, Death, with the planet Saturn (see Crowley's comments, above). Thierens notes that the picture on the card "is a sort of allegorical representation of Father Chronos, Time." Saturn is "the planet or cosmic function of Formation, which means also determination in Place and Time, limitation, definition, etc." Thierens also writes: "Death certainly is only relative and the death of the form may mean the commencement of life on another plane." 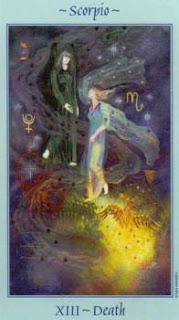 The Celestial Tarot by Brian Clark

Clark titles Death "The Regenerative Cycle of Scorpio." Clark writes: "The ancients observed that when the Sun passed through Scorpio, the solar force was waning and dying in preparation for winter." Depicted on Clark's Death card is Hecate, goddess of the nether world and the crossroads. Clark notes: "Scorpio represents self-mastery and the emergence of a more authentic self." 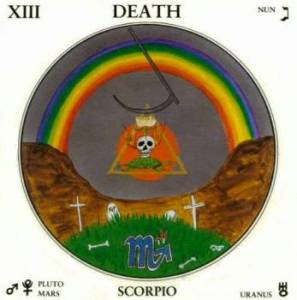 Mann associates Trump 13, Death, with the zodiac sign Scorpio, which "has domain over the process of testing, separation, death and putrefaction. Its rulers are Mars indicating change, breakdown and fighting spirit, and Pluto the transformer, bringer of war and large-scale change." (Whereas traditional astrologers assigned rulership of Scorpio to Mars, modern astrologers sometimes assign rulership of Scorpio to Mars and Pluto jointly or to Pluto alone.) 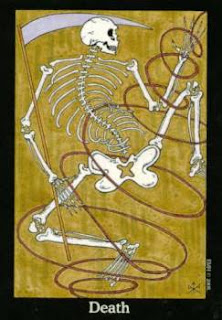 Liz Hazel lists attributions for Death as "GD (Golden Dawn) - Scorpio. Also Pluto, sometimes Saturn." She notes that this card may appear on the occasion of death, endings, birth, or beginnings -- a significant change in the life cycle -- leaving the past behind, rebirth of hope, marriage (change of identity), becoming a parent or grandparent, a life-threatening situation or illness.

Scorpio is the 8th sign of the zodiac, associated with the 8th house, house of death and regeneration. I find it quite natural to think of Scorpio in connection with the Death card. I find that I think of Death as more of a "Pluto" card than a "Mars" card, although I certainly understand the reasoning for both. Love's association of the card with Aries is interesting, and she makes a good case for it, but not good enough to overthrow my inclination to use Scorpio. I confess that I have not really considered the planet Saturn in connection with this card in the past, but I believe I will from now on.