I continue my astrological exploration of the Major Arcana with Trump 12, The Hanged Man. The use of astrological associations with Tarot is completely up to the reader. This is merely intended to be interesting and fun. 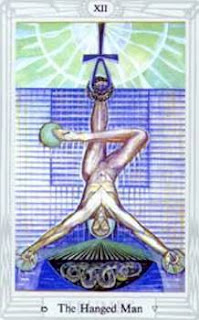 Thoth Tarot by Aleister Crowley
Crowley attributes this card to the element Water, as does Book T, which titles it "The Spirit of the Mighty Waters." In explaining this association with Water, Crowley writes: "It would perhaps be better to say that it represents the spiritual function of water in the economy of initiation; it is a baptism which is also a death. . . It is to Water that the Adepts have always looked for the continuation (in some sense or other) and to the prolongation and perhaps renovation of life." 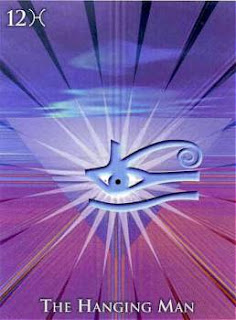 This deck associates The Hanging Man, Trump 12, with the zodiac sign Pisces (a mutable Water sign), ruled in traditional astrology by Jupiter (planet of abundance and expansion) and in some modern astrology systems by Neptune (planet of mystery, illusion, imagination, and mysticism). Pisces is the 12th sign of the zodiac, and is known for being sensitive, compassionate, spiritual, and non-materialistic -- but also prone to confusion, alcohol and drug addiction, mental illness or breakdown, self-delusion, self-escapism through drugs, fantasy, and illusion. In The Hanging Man, Love sees a need to balance out intuition and sensitivity with discipline and logic.

A.E. Thierens, PhD. (Astrology & the Tarot)
Like Love, Thierens associates The Hanged Man with Pisces, the 12th sign. Pisces represents "loss to the outer world, solution, handing over the results of one cycle to the following one, 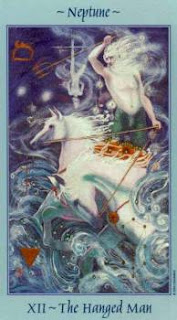 The Celestial Tarot by Brian Clark
Clark titles The Hanged Man "The Initiation of Neptune," with Neptune being "the astrological god who oversees the vast expanse of the collective unconscious. . . Through the process of suspension the Hanged Man turns his focus towards the unconscious and experiences Neptune rising out of his watery kingdom. . . Neptune reminds us that remaining attached to old patterns, habits, or addictions perpetuated the endless cycle of martyrdom and victimization." 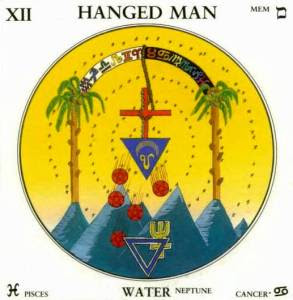 The Mandala Astrological Tarot by A.T. Mann
Mann associates Trump 12, Hanged Man, with the element Water and the planet Neptune. He writes: "Water is a symbol of emotional life, as a transmitter and medium for feelings from the unconscious. . . Neptune governs the psychic, mystical and visionary life which can be more vivid than reality." 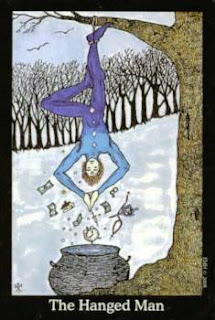 In my readings, I tend to lean toward the association of Neptune with The Hanged Man. Of course, when I use a deck whose creator offers a different association, I always take that into account.