Listen to the Animals: Groundhog

“Groundhog Day has its roots in the ancient Christian tradition of Candlemas Day, when clergy would bless and distribute candles needed for winter. The candles represented how long and cold the winter would be. Germans expanded on this concept by selecting an animal–the hedgehog–as a means of predicting weather. Once they came to America, German settlers in Pennsylvania continued the tradition, although they switched from hedgehogs to groundhogs, which were plentiful in the Keystone State.” (Source: http://www.history.com/this-day-in-history/first-groundhog-day)

To celebrate Groundhog Day here in the U.S., I decided to go through my animal-themed oracle and tarot decks to see which creators of those decks included the groundhog and what they said about it.

Of all my decks, I was only able to find one – the Wolf Song oracle deck by Jeanette Spencer and Lew Hartman (U.S. Games) – that included this charming rodent, known also as Marmota monax, woodchuck, or whistlepig. 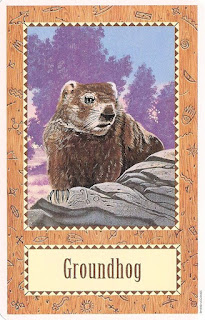 In this deck, the groundhog card is titled “Woodchuck” and given the key words “Analysis, Attention to Detail.” Woodchuck is viewed as a creature of common sense, good judgment, and advanced planning. In times of great change, Woodchuck holds steady, getting the lay of the land, taking everything under consideration, approaching obstacles with a plan to go over, under, or around.

Today we heard from Punxsutawney, Pennsylvania, that the town’s celebrated groundhog, Punxsutawney Phil, saw his shadow, forecasting 6 more weeks of winter. At the same time, a groundhog in New York called “Staten Island Chuck” did not see his shadow, thereby forecasting an early spring:
http://www.silive.com/news/index.ssf/2017/02/groundhog_day_2017_what_time.html

That pretty much covers the possibilities!