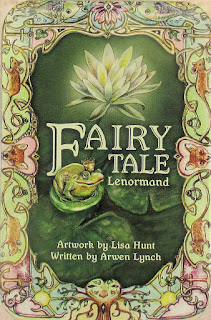 Fairy Tales + Lisa Hunt + Arwen Lynch . . . I’m already reaching for this deck. . . And then U.S. Games puts it in a wonderful little metal tin box. I’m almost speechless, but not quite. Let me continue.

From “_The Enchanted Horse_”  to “_East o’ the Sun, West o’ the Moon_”  to “_Rose Red and Snow White_”  to “_The Red Shoes_,” the Fairy Tale Lenormand carries us through many cultures, countries, and concepts, while connecting us neatly to the thirty-six cards of the Lenormand oracle. 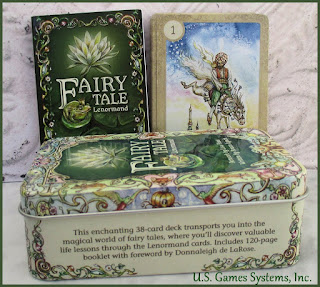 Even if you completely ignore the Little White Book (LWB) and the fairy tale descriptions, you can still use this as a Lenormand deck, thanks to Lisa Hunt’s highly successful effort to modify her approach to the art. Her signature love of detail is still evident but has been geared toward simplicity and ease of access, in keeping with the Lenormand’s purpose.

Familiarity with the tales (as told by Arwen Lynch) simply serves to enrich and enhance the reader’s experience with these cards. For example, when I see the Garden card from the Fairy Tale Lenormand, I not only pick up the traditional meaning of “friends, festivities, acquaintances, gatherings,” I remember Oscar Wilde’s story of “_The Selfish Giant_,” whose garden remained in a wintry state until one brave child dared to enter, causing everything in the garden to bloom. The Snake warns of “cheating, betrayal, manipulation.” The image on the card reminds me of how Rudyard Kipling’s mongoose, _Rikki Tikki Tavi_, deals with evil cobras, protecting his humans from the threat.

I love the spreads in the LWB, especially the Tower Spread (based on Rapunzel) and Happily Ever Afters, a 12-card spread laid out in three fans of four cards each.

I am looking forward to using this deck alone and perhaps in combination with one of my Fairy Tale Tarot decks. 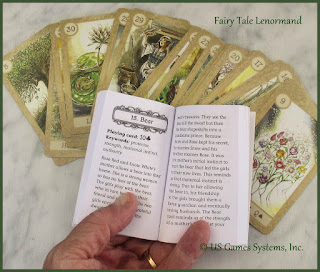 
"Fairy Tales have been teaching us timeless life lessons for centuries. Lisa Hunt’s enchanting artwork draws us into the magical world of peasants and princesses, dragons and daring deeds. By weaving imaginative myths into the Lenormand structure, Fairy Tale Lenormand helps readers connect with the cards in meaningful and memorable ways. The 38-card multicultural deck, presented in a treasure chest tin, includes extra Gentleman and Lady cards for personalized readings.

The Fairy Tale Lenormand is based on the Lenormand system but includes 38 cards instead of 36. This is because the Fairy Tale deck contains two “Gentleman” cards and two “Lady” cards. In each case, there is a “peasant” version and a “prince” or “princess” version. Many fairy tales have a peasant becoming a prince (or vice versa), and female characters are often either a peasant or princess. 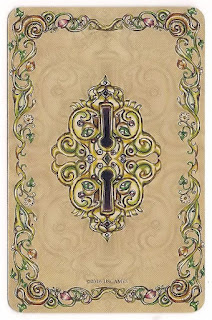 The deck of 38 cards and accompanying 120-page guidebook are packaged inside a metal tin. The guidebook contains a Foreword by Donnaleigh de LaRose and an Introduction by Arwen Lynch, who also provides the commentary for each card.

A section at the end of the booklet contains information on Fan Spreads (spreads that use the shape of a fan), a Crossroads Spread, a Tower Spread, and a spread called Happily Ever Afters consisting of three fans with four cards each.

The fronts of the cards have tan borders surrounding a full color image. Card numbers are in the upper left corner. Card titles are centered below the image, along with the name of the playing card that corresponds to that Lenormand card. Reversible card backs feature a tan background with an intricate design, a border of vines, leaves, and flowers in green and brown. An intricate green and brown design featuring mirror-image old-fashioned keyholes is centered on the card backs. 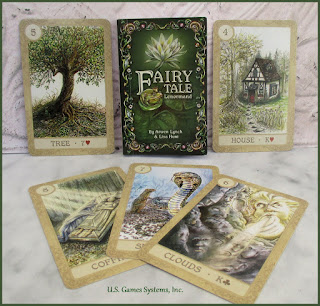 The glossy guidebook cover is made of sturdy stock. The inside is printed black on white with a couple of black and white illustrations and spread layouts (individual cards are not illustrated ion the booklet). Card descriptions include the number and name of the card, the playing card association, keywords for that card, and two pages describing the fairy tale association and how it relates to the traditional meaning of the Lenormand card.

As stated on her _web site_,  Arwen Lynch “began reading the Tarot in 1980 when a friend handed her the Thoth deck. She didn’t really like the Thoth deck then (her opinion has changed since) so moved on to the Herbal Tarot which she still has in her collection of over 150 Tarot and Oracle decks.” A past president of the American Tarot Association, Lynch is also the author of several books under the pen name Marilu Mann. 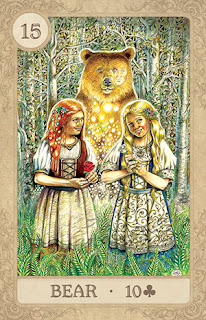 Lisa writes: “My artwork is about letting go and allowing a confluence of emotion to help paint the picture.” She is inspired by “almost anything: nature, reading (especially mythology and folklore), traveling and visiting parks and zoos, etc.”

You can read about Lisa’s technique and creative process HERE.