I really enjoyed doing this spread last year at this time, so I’m giving it another go. To set the stage, I am quoting from The New Encyclopedia of the Occult by John Michael Greer (Llewellyn Worldwide):

The positional definitions for this spread are inspired by the hauntingly beautiful song “All Soul’s Night” with words and music by Loreena McKennitt. You can listen to the song HERE.  You can read the lyrics of the song at this link.

This year, I am using the Ghost Tarot by Davide Corsi (Lo Scarabeo). The layout is in the shape of a pentacle. 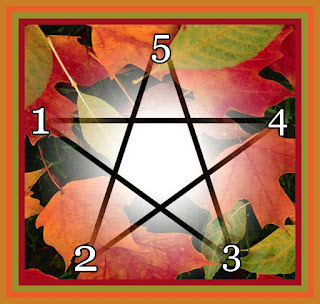 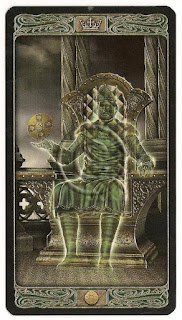 (1) This Spirit dances around and around

Well, I have to say if I were going to list possible cards that might “dance around and around,” the King of Pentacles would probably not be one of them! He strikes me as stable, steady, and secure. I think of the planet Saturn when I see this card, a “father” symbol with an energy similar to this King. However, perhaps at Samhain this Spirit of the Father – provider and caretaker – lets loose and kicks up his heels for a change. Good for him! 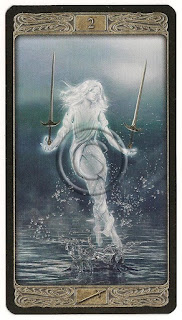 (2) This Spirit brings a hidden memory

This hidden memory seems to involve conflict but also negotiation and taking different viewpoints into consideration. The spirit on this card seems to stand on her toes atop a body of water, splashing the water but not sinking into it. This hidden memory involves a time of reliance on intellect or rationality, of touching the surface of deeper emotions but not surrendering to them. 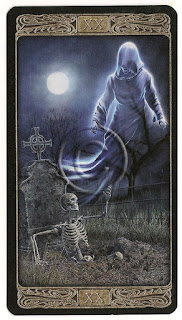 (3) This Spirit carries a light in the distance

With Judgment representing “In the End, the Beginning” the light this spirit carries could be seen as “the light at the end of the tunnel.” Although something is ending, something else is being born as I move toward the light. 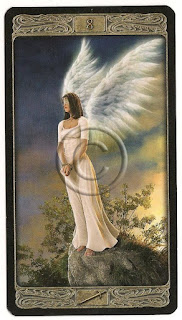 (4) This Spirit waits for me on the bridge

For this card, the booklet for this deck says: “Freedom is born from within.” The spirit is blindfolded and her hands are bound, but the wings on her shoulders tell us that once she removes the restrictions and hindrances that constrain her, there is no limit to the places she can go or the things she can experience. She waits for me to cast off whatever I have allowed to blind or bind me and take flight with her. 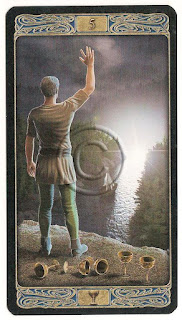 (5) This Spirit passes by the bridge and me

The spirit on this card raises his hand in farewell as he passes by the bridge and me. He represents emotions that need to be released, set free, or abandoned if I am to experience the freedom of flying with the angel from the Eight of Swords. Three cups lie on the ground, empty, but two remain upright. These I will carry forward on my journey.

Happy Halloween and Blessed Samhain to all!