Sherlock Holmes Card of the Day: 2 of Analysis

The Sherlock Holmes Card of the Day is:
TWO OF ANALYSIS
(2 of Cups) 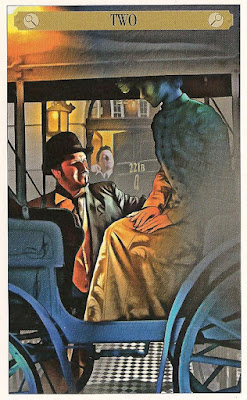 The quotation chosen to represent the entire suit of Analysis is “There are fifty who can reason synthetically for one who can reason analytically” from A Study in Scarlet. This comment is made, as you might expect, by Sherlock Holmes himself. It is prefaced by the following: “In solving a problem of this sort, the grand thing is to be able to reason backwards. That is a very useful accomplishment, and a very easy one, but people do not practise it much. In the every-day affairs of life it is more useful to reason forwards, and so the other comes to be neglected.” I love that.

The Holmesian Wisdom for the 2 of Analysis is “Should I ever marry, Watson, I should hope to inspire my wife” from The Valley of Fear. The card shows Dr. Watson preparing to leave 221B Baker Street to set up home with his new wife, Mary Morstan, and to practice as a doctor.

The book that accompanies this deck also provides interpretations for each card under the headings “The Game” and “The Fog.” The former elaborates on the upright keys, while the latter expands on reversed meanings. Examples from “The Game” for the 2 of Analysis: “pledges and promises… seeking reciprocation and partnership… engaging the imagination… the attraction of opposites.” Examples from “The Fog”: “going it alone… breakdown or separation due to opposing needs… a sense of betrayal.”