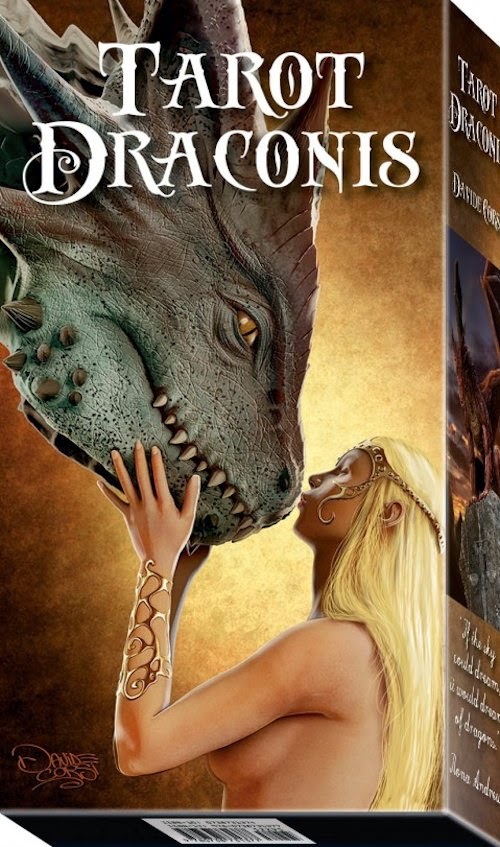 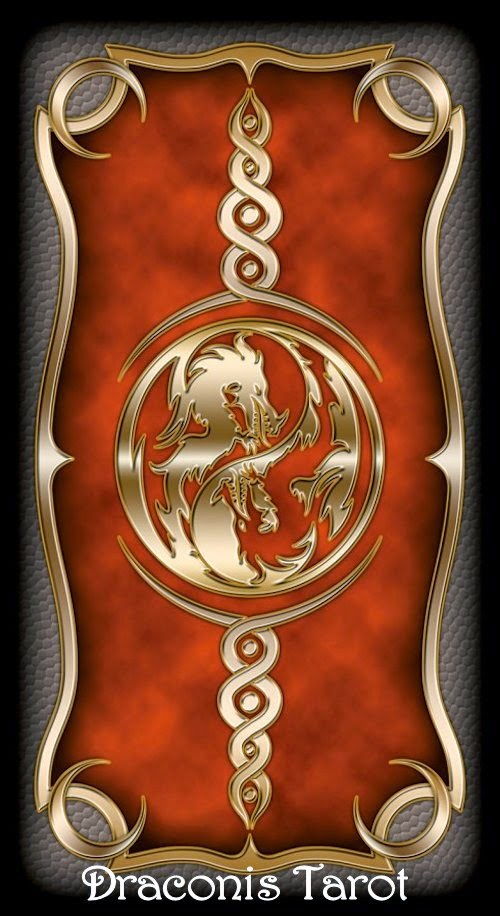 (My apologies for labeling the card images "Draconis Tarot" when it should be "Tarot Draconis.")

I like dragons (and dragon-themed decks), so of course this deck appealed to me immediately. I loved the examples of the cards that I saw on line. I like the way the artist gave many of the dragons a distinct “attitude” or “personality.” Unfortunately, most of the card images are darker than I would like. Many of the images look muddy, and details are difficult to see or entirely lost.

I do like the color schemes based on elemental/suit associations. You can tell at a glance if a card is from the suit of Cups, Pentacles, Wands, or Swords. To me, that adds something to a layout. You immediately see elemental strength/weakness and relationships in a reading. 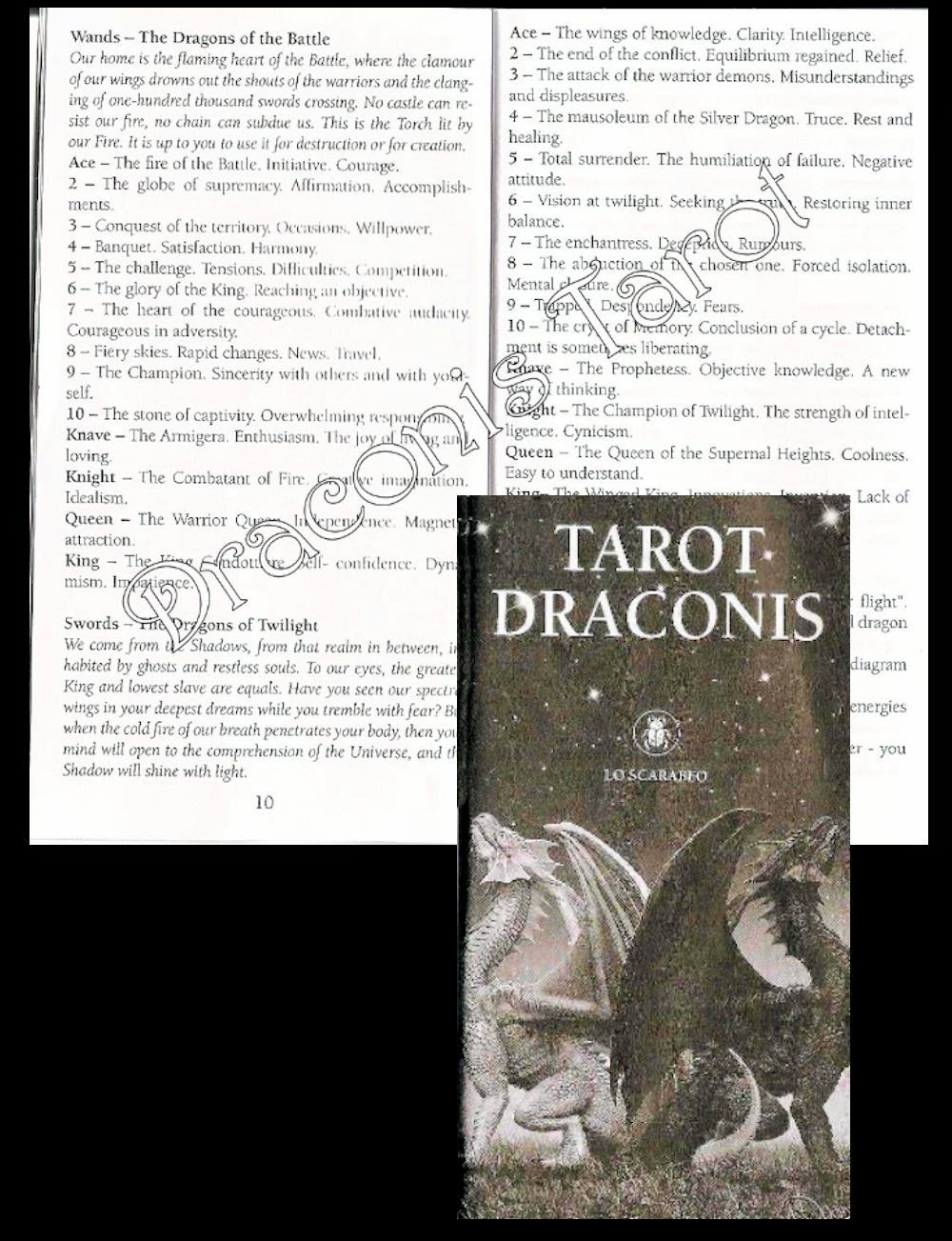 I am quite fond of the Little White Book (LWB) that comes with this deck. It starts with a quote by the dragon Smaug from The Hobbit by J.R.R. Tolkien. Who wouldn’t love that? After a discussion of what dragons have symbolized over the centuries (and still symbolize) to humans, we get a description of what this deck offers: “a mythical past of Humanity. . . a world where heroes in armour achieve their destiny by fighting epic battles to conquer kingdoms and where the skies are obscured by the passage of Dragons.”

That’s very nice – but what I enjoy most are the descriptions of the individual suits. Here are the opening lines of each:

Chalices – The Dragons of the Dawn
“We come to the days before days, in a time when the World was a dream, and Man was still a soul. . .”

Pentacles – The Dragons of Wealth
“We are the first-born of Mother Earth and we know her secrets. . .”

Wands – The Dragons of the Battle
“Our home is the flaming heart of the Battle. . . This is the Torch lit by our Fire. It is up to you to use it for destruction or for creation.”

Swords – The Dragons of Twilight
“We come from the Shadows, from that realm in between, inhabited by ghosts and restless souls. . .”

Embodying all the magic and primitive purity of the mighty winged beasts, Davide Corsi's bold dragon art perfectly combines the epic grandeur of classic fantasy with the iconic power of the traditional Rider-Waite tarot. It has been said that dragons share a common sight everywhere—in the skies, in the sea, and on the land. In this deck, the visionary wisdom of the dragons will be your guide through the mystical and spiritual worlds. 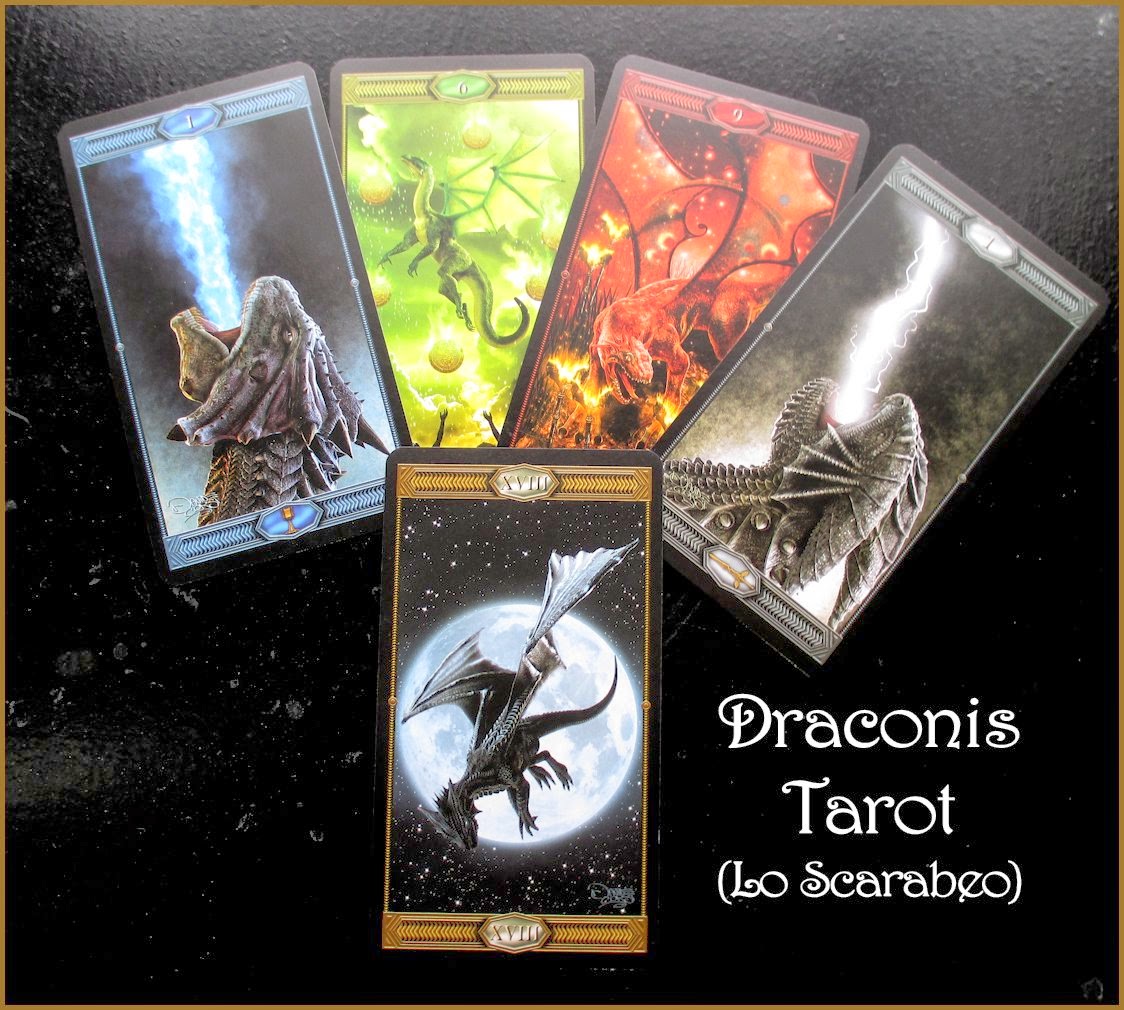 Davide Corsi is an illustrator based in Italy. In addition to Tarot Draconis, he is the artist for the Vampire Tarot of Eternal Night, The Tarot of the Elves, the Pictorial Key Tarot, and The Ghost Tarot, all published by Llewellyn.

This deck has the standard Tarot components: 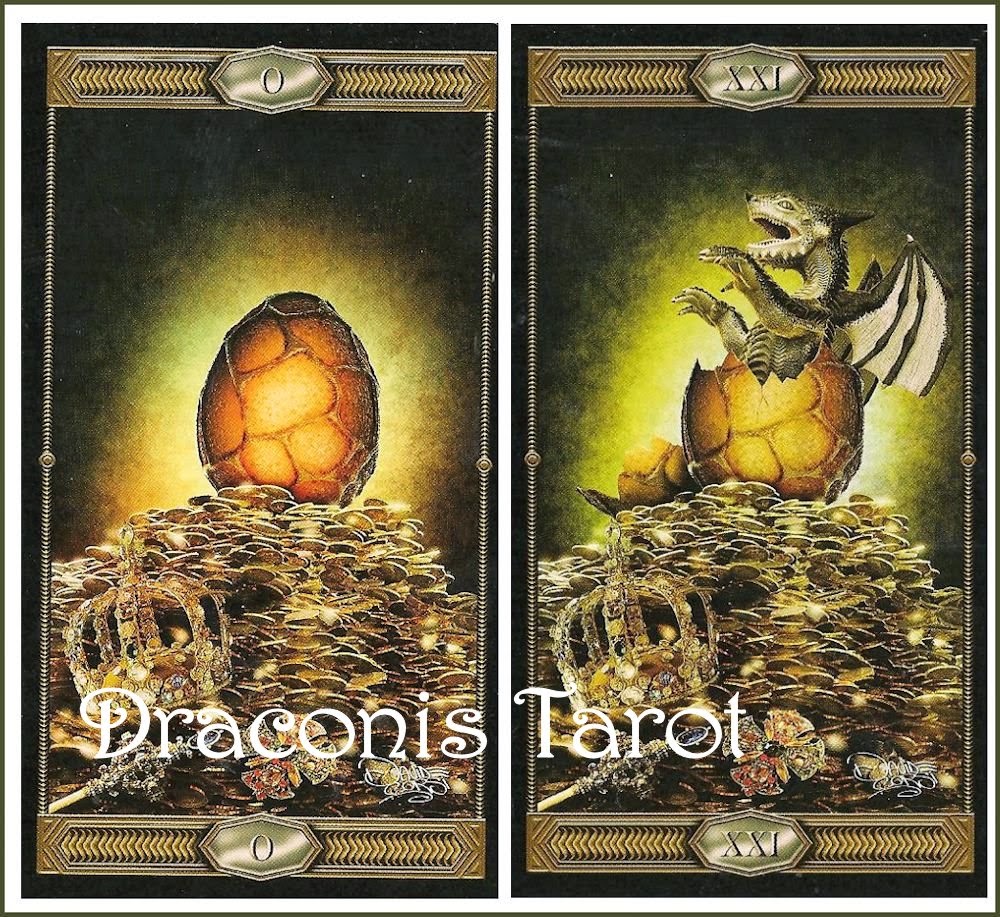 The Major Arcana begins with a glowing golden egg atop a pile of treasure for The Fool and ends with the egg breaking open as a baby dragon emerges on The World.

A number of reviewers have expressed disappointment in the Court Cards from this deck, describing them as “uninspired.” This is largely due to the approach that was used in creating them. For example, notice that the horse on all four Knight cards is the same horse in the same position. The Queens feature the same woman for each suit in a slightly different pose but sitting on the same throne, with the color scheme varying based on the suit. This is true of the Knaves, Knights, and Kings as well.

If you’re interested, you can also get the following from Lo Scarabeo/Llewellyn:
_Draconis Journal_
_Draconis Satin Bag_ 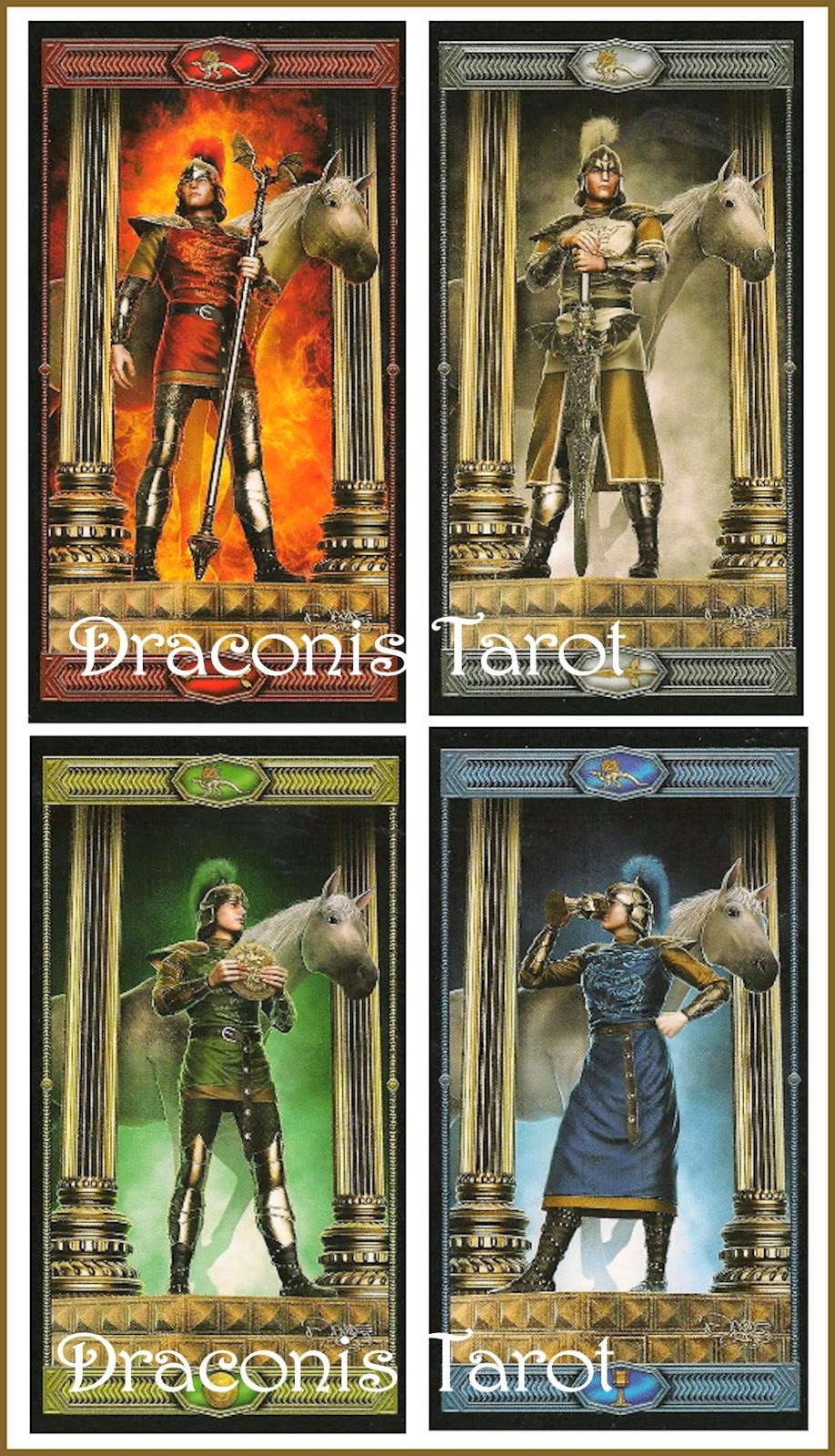 Card fronts have black borders and a picture frame colored for each suit (blue-cups, light green-coins, red-wands, gray-swords) or Major Arcana (gold). The backs also have black borders with an ornate golden frame on a red background and a gold emblem of a dragon.

Quality of the card stock is acceptable – somewhere between sturdy and flimsy.  The cards are not laminated.

I would describe the art as a classic fantasy style that comes across very well on the Llewellyn web site, where some of the cards are displayed digitally. Unfortunately, that level of beauty and “sizzle” does not make it into the cards. This is not the fault of the artist, of course, but probably the printing process.