Week at a Glance: Owls & Lilies

The purpose of drawing a "Week at a Glance" card is to get a sense of the sort of energy, circumstances, or personal qualities I might need to be aware of during the upcoming week. I also use this opportunity to become more familiar with decks I don't work with a lot, so you will often see me quoting the creator of the deck or someone who has a closer relationship with the deck than I do at this time.

This week I am continuing my exploration of Lenormand style decks by using a pair of cards from the Mystical Lenormand by Regula Elizabeth Fiechter, with pictures by Urban Trösch (AGMüller). 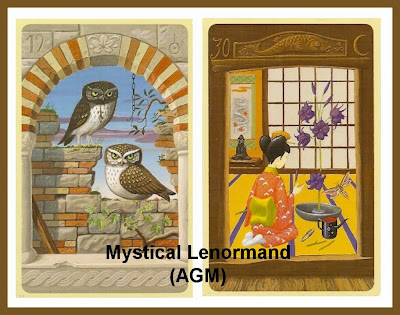 The Secrets of the Lenormand Oracle by Sylvie Steinbach:

In view of the fact that the Mystical Lenormand uses the more specific "Owls" instead of the general "Birds," I looked into the symbolism of owls using the Dictionary of Symbols by Jack Tresidder (Chronicle Books). These days, we tend to think of owls as representing wisdom, but many ancient cultures viewed the owl as sinister, even ferocious, linking it with death and occult powers. It was the bird of death in numerous ancient cultures, but also seen as a guardian of the night or guide to the afterlife. The "wise owl" image comes from the Greeks, who made owls sacred to their goddess of wisdom and learning, Athene Pronoia.

This is all very interesting when you consider that I pulled the Lilies and Birds for my Nov. 3 Week at a Glance. I think it very likely that the Lily (Lilies) card refers to my elderly mother and her care, which at this stage is pretty much ongoing. She is independent to a degree, but often needs assistance, usually for health reasons, as she did this past week and into the weekend and beyond.

It seems clear to me that the Lenormand cards may or may not limit themselves to the week ahead. Although I think it is very possible that something relevant to the weekly cards is going to take place this week, I also get a sense of messages that relate to situations down the road. The emphasis seems to be on my mother and clear communication with her, my siblings, her doctors, and so forth.

Based on last week's draw -- the Scythe and the Lady from Ciro Marchetti's Gilded Reverie Lenormand (U.S. Games) -- I was on alert for the possibility that I would need to "make a decision this week, a decision that could lead to 'cutting something away' or 'cutting through something'" or possibly (as suggested by Ellen) "decision making with a female soft touch to prevent hurt and soothe the disappointment." I don't recall any specific incidents or situations this past week that seem to relate to these cards.