Journey through My Decks: King of Swords

For this entry in my Journey through My Decks series I chose to use the Ancestral Path Tarot by Julie Cuccia-Watts, one of my all-time favorite decks that has just recently been _re-released by U.S. Games Systems, Inc._

I always find it interesting to see how packaging changes when a deck is re-issued. So here, for your viewing pleasure, are the old and new boxes side by side. Which one do you like best? 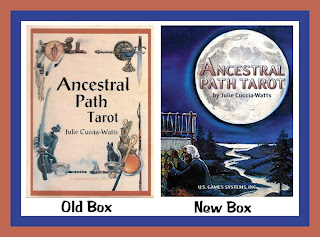 One of the many, many features I like about this deck is the incorporation of people other than white, European-looking individuals. Cuccia-Watts chose to associate the four suits of the Minor Arcana and Court Cards with "the four racial divisions: "yellow Japanese Swords; black Egyptian Staves; white British Cups; and red Native American Sacred Circles." Myths or legends from each group form the backdrop for the corresponding suit. I remember doing a reading for a Japanese client years ago. Having chosen the Ancestral Path deck for the reading, I couldn't help smiling when the card I drew for her was a Swords card.

As described by the publisher: "The Ancestral Path Tarot by Julie Cuccia-Watts threads together the diverse beliefs of various cultures in order to find commonalities of experience between them. It examines the traditions of our ancestors through mythology to reclaim a personal spirituality that enables us to perceive the divine in ourselves and others. The Ancestral Path Tarot emphasizes the living tradition of all human cultures for us to factor into our world view. The deck portrays paths created by ancestors of different times and cultures for our consideration."

Let's take a closer look at the KING OF SWORDS.

In the book written to accompany this deck, Tracey Hoover tells us that the suit of Swords in the Ancestral Path Tarot is inspired by the feudal Japanese Samurai cult and mytho-religious tenets of Shintoism.

Like all Court Cards in this deck, the King of Swords is represented by an ancestral figure, in this case, the creator deity Izanagi. Izanagi and the goddess Izanami (Queen of Swords) are the parents of Moon God Tsuki Yomi (Prince of Swords) and Sun Goddess Ama Terasu (Princess of Swords).

In mythology, Izanagi and Izanami had the task of creating form out of chaos. On the King of Swords, Izanagi is shown standing on the Bridge of Heaven, churning the waters of chaos with his lance.

Tracey Hoover tells us that Izanigi's white garments "reflect the purity and intensity of his attention to the divine task" and his blue sash "proclaims his affinity with the air element."

Divinatory Meanings provided by Hoover: "Creative skill, intellectual prowess, the ability to envision and then manifest those visions; use of the sword as a tool rather than as a weapon. Emerging from chaos or confusion with a plan of action; action following thinking and planning." When the card is weakly aspected, it can suggest "destruction rather than creation, regression rather than progress, or inversion rather than extroversion."

"Creating form out of chaos" seems like an appropriate assignment for the King and Queen of Swords, who are typically known for being rational, logical, and objective.