Reading with the Deck of 1000 Spreads

Now that I have done a _REVIEW_ and a reading for a client using Tierney Sadler's Deck of 1000 Spreads (Llewellyn), I am going to indulge my wild, spontaneous, take-a-chance Sagittarius Sun by choosing cards at random to determine the positional definitions (and perhaps the question) for a spread.

As Tierney puts it in Chapter Five of How to Use Your Deck of 1000 Spreads: "Choosing a topic or an entire spread at random may seem so. . . random. But choosing cards this way not only lets the universe decide what the querent needs to know, but it also removes any reader and/or querent bias that might come with consciously creating spreads."

At Tierney's suggestion, I first removed the green Card of the Day, the green Significator card, and the blue Clarification card from the deck. I then separated the cards into five piles, arranged by color, backsides facing up. I shuffled the first pile (green topic cards), asking Spirit to give me a suitable topic.

The result: MIND (your current mental or emotional state)

Well, that's usually a pretty good topic. I now get to choose as many cards from the other piles as I like. I'm not a huge fan of huge spreads, so I am going to go with a simple 3-card spread. Rather than leave the remaining cards in color-coded piles, I shuffled them together and drew three cards from the stack. All three are blue Influence cards:

CONS (consequences, effects, or downsides of a particular choice or action you may take in regard to the spread's topic or other relevant spread positions)

SURPRISE (an unexpected plot twist or turn of events you don't see coming in regard to your question, situation, or topic)

Tierney advises us to switch the order of the cards if we feel they make sense in a different order. I am going to place Crowning Influences first, followed by Cons, and ending with Surprise.

The "Cons" card is typically paired with the "Pros" card, so I am going to pull the "Pros" card from the deck and add it to this reading. My reading now looks like this:

My instinct is to arrange these cards into this layout:

The Druid Craft Tarot (by Philip and Stephanie Carr-Gomm, illustrated by Will Worthington / St. Martin's Press) responded loudly to my call for volunteers, so that is the deck I am using for this reading. And the winners are... 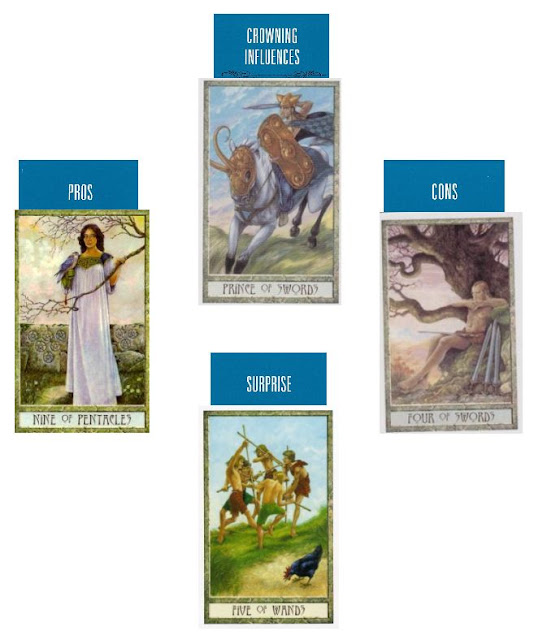 I can certainly own this Prince as an influential part of my mental make-up. The cards seem to be telling me that this part has an especially strong influence at the moment, for better or worse. I think I am being encouraged or challenged to emphasize or cultivate the most helpful aspects of this Prince's nature and minimize the most harmful aspects.

I also think this Prince may refer to another person in my life who embodies these characteristics, and who most certainly has a strong influence on me.

The "pros" of having the Prince of Swords as my crowning influence include a certain "peace of mind" in the sense that I do not feel threatened, weak, or vulnerable. It is almost as if the Prince protects this lovely lady in her garden with her companion falcon. The Nine of Pentacles typically represents success in the material world but can also refer to the affirmation of  one's values in one's lifestyle. In other words, I can live the life I desire to live -- settled, secure, and private.

The "cons" of having the Prince of Swords as my crowning influence include a frequent need or desire to withdraw or retreat into myself -- perhaps to escape from the Prince's sometimes overbearing, contentious, aggressive energy. The man on this card does not look like he is "resting." To me his expression seems troubled, as if heavy thoughts weigh on his mind. When one retreats or withdraws, stagnation can result -- an inability or unwillingness to take action or advance toward a goal. If this happens too often or goes on too long, it is counterproductive.

What strikes me most about the image on this card is that the expressions on the faces of the boys are clearly not angry or serious. They are having fun, enjoying the struggle, knowing that the purpose of this activity is not to hurt or destroy but to test and strengthen. The "Surprise" card refers to "an unexpected plot twist or turn of events you don't see coming." Perhaps the influence of the Prince of Swords will lead me into creative conflict or competition that I am meant to enjoy and benefit from, if I allow myself to do so. In general, I don't like to "compete" with other people. I find it stressful and anxiety-provoking. I would indeed be "surprised" if I actually enjoyed a competition.

Wow, lots to think about in this reading. And I love the way Tierney's cards set the stage for this "story." I think my Deck of 1000 Spreads is going to get a lot of use!
on Thursday, March 14, 2013