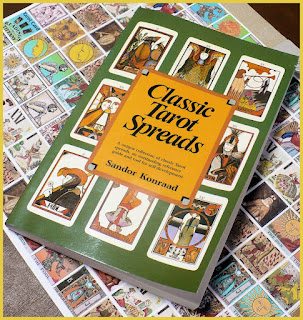 I can see where Sandor Konraad's Schedule for Learning the Tarot in Thirty Days would be a major attraction to anyone who wants to read the cards. I did not try the system Konraad presents because, well, I already read the cards. However, his method is systematic and organized, and might work pretty well for a lot of people.

Konraad recommends decks with unillustrated pips for beginners. I'm not sure I can agree with that advice. Certainly a non-illustrated deck can simplify the learning process, but in some ways (or for some people), I think it's more difficult to read with such a deck. 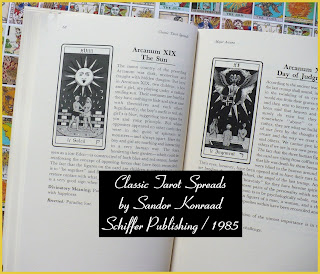 Konraad's writing style is straightforward and easy to understand. I know that I will often refer to the Table of Root Number Associations and the Summary of Meanings in Divination included in the book. I appreciate the fact that after he gives detailed instructions on how to handle the cards ("seal" the pack by placing benevolent cards at the top and bottom of the deck; wrap them in purple silk or velvet; place them in a wooden box, etc.), he writes: "It is difficult to say exactly how important the above is regarding the effectiveness of the pack in a reading but what is of considerable importance is the reader's attitude." Konraad views compliance with Tarot traditions to be an indication of the reader's "seriousness and respect for the Tarot." Obviously he is entitled to his opinion, but my respect for the cards is enormous even though I choose not to tie myself to rituals or traditions.

The one-page descriptions/interpretations provided for each Major Arcana card are well worth reading. Konraad discusses some of the symbols on each card, astrological associations, and associations he makes with Jungian and Freudian psychology. As I looked at the black-and-white illustrations, I found myself (yet again) drawn to the Oswald Wirth deck, which I do not yet own. Hmmmm.....

Moving on! Just so you'll know, I'm not a big fan of HUGE spreads. The times I have used them, I got such "information overload" that I was forced to lie down with a cold pack on my head (okay, I'm exaggerating, but you get the point). An exception would be a zodiac spread, where each card represents one of the 12 houses of the zodiac. In that case, it's easier for me to see which information applies to which area of life. 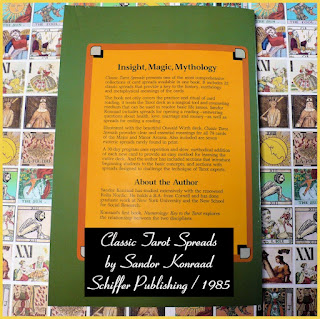 In Classic Tarot Spreads, Sandor Konraad presents 22 spreads, most of which involve 12 or more cards. If you dislike large spreads, this may not be the right book for you. I confess that I will probably never use a lot of these spreads -- although I am going to try the Past Lives Spread. I hope to share my reading on this blog. Stay tuned for that.

Classic Tarot Spreads presents one of the most comprehensive collections of card spreads available in one book. It includes 22 classic spreads that provide a key to the history, mythology and metaphysical meanings of the cards. The book not only covers the practice and ritual of card reading, it treats the Tarot deck as a magical tool and counseling medium that can be used to resolve basic life issues. Sandor Konraad includes spreads for opening a reading - answering questions about health, love, marriage and money - as well as spreads for ending a reading.

According to the introduction to this book -- "Confessions of a Reluctant Tarot Reader" -- Sandor Konraad spent much of his life engrossed in parapsychology, not Tarot. He was staying at a guest home in New England, preparing a course in parapsychology, when he picked up a Tarot deck and book at a local shop. His purpose was simply to familiarize himself with the imagery on the cards. He ended up doing a reading for a woman who insisted he read for her, even though he warned her that he was a "total neophyte." His fascination with the cards grew from that experience, and the rest is history. 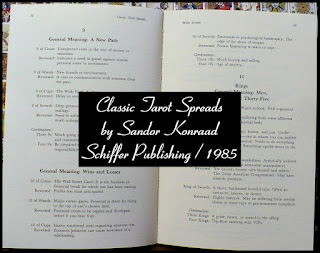 Konraad has studied extensively with the renowned Rolla Nordic. He holds a B.A. from Cornell and has done graduate work at New York University and the New School for Social Research. In addition to Classic Tarot Spreads, Konraad is the author of Numerology: Key to the Tarot.

Following a Preface and the above-mentioned Introduction, the book is divided into four parts: 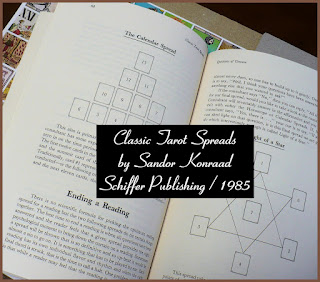 Although the cards shown on the cover of the book are from the Aquarian Tarot (Morgan  Press), Konraad bases his descriptions of the Majors on cards from the Oswald Wirth deck (U.S. Games Systems). The Majors section is therefore illustrated with black-and-white images of the Wirth cards.

For the type of reading presented in Part Three, Konraad suggests that a deck with illustrated pips, such as the Rider-Waite  or Morgan-Greer (U.S. Games Systems), "might prove more evocative."

Even though Konraad gives us a lot of detailed information to learn, he also reminds us that when reading the cards, we should trust our instincts: "Just say the first thing that comes to mind. . . Do not hold back what intuitively comes to you."
on Tuesday, October 02, 2012