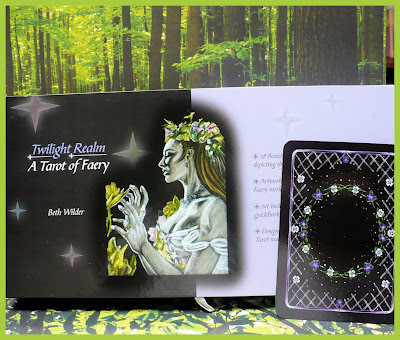 I was going to begin by saying that I'm not that big a fan of "fairy" (or "faery" or "faerie") decks. But then, if you look at my Tarot deck shelves, you will see Faery Wicca Tarot (Stepanich, Yates / Llewellyn), The Fairy Tarot (Lupatelli / Lo Scarabeo), and Mystic Faerie Tarot (Ravenscroft / Llewellyn) -- not to mention the Dream Fairies oracle (Jeffrey, Luna / Lo Scarabeo) and Oracle of the Dragonfae (Cavendish / Blue Angel Gallery). Okay, fair(y) enough. The truth is, *some* fairy-themed decks do appeal to me. It depends on various factors. 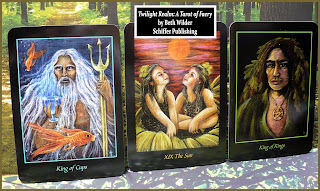 Having said that, Twilight Realm (A Tarot of Faery) definitely does appeal to me. The evocative art is probably the main reason. While I like some cards better than others, in general the images not only make an emotional connection for me, but also prompt contemplation and a study of the details.  The accompanying guidebook offers much to consider and digest, which I enjoy. I feel deeply connected to the 5 Cups, Hierophant,  3 Wands, Sun, King of Cups, and Queen of Wands from this deck. The Page of Cups and Page of Wands are adorable!

It does not bother me that the images depart from the Rider-Waite-Smith (RWS) model. As I may have mentioned before,  I like to combine my existing knowledge of those traditional symbols and images with personal touches and insights provided by the person who designed the deck. Yes, this is what many would call an "art deck," but for me, that doesn't automatically exclude it from my reading decks.

I like Wilder's approach to Tarot, which she describes in the Introduction: "The reader should always do what feels most comfortable." She does indicate that a card that falls from the deck during shuffling should receive special attention, as "that card wants to be heard." I think that is a matter of personal belief and reading style. 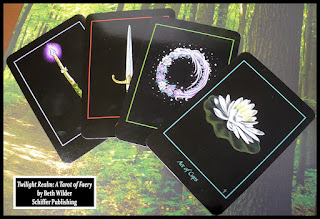 To summarize, I find a lot to like about this deck. If you prefer decks based strictly on the RWS model or if you prefer light, airy-fairy decks, this probably isn't the one for you. Also, the cards are difficult for small-ish hands to shuffle. The only shuffling method I can use with these is to deal the cards out face down on a table and "stir them around."

"Journey through the mystical land of Faery with this unique Tarot book and art card deck. Glowing images of ethereal creatures evoke the mystic nature of Faery, drawing readers into their twilight world of wonder. The accompanying book provides explanations for each card using Faery lore as the basis. Touching on aspects of nature and Faery tradition, readers will gain insight through the magical painting style of Beth Wilder."

Beth Wilder writes that she created this deck "as a way for fairies to communicate with other people" because that is what the fairies asked her to do. In her Introduction, Wilder apologizes to Tarot enthusiasts "who are used to cards appearing in certain ways with specific symbols and meanings attached to them." She explains that the cards in this deck were inspired by the fairies around her and therefore don't necessarily "reflect typical Tarot ideology." 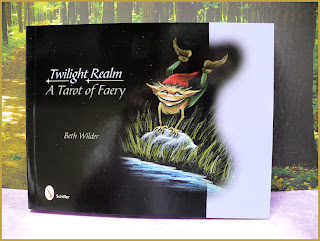 For this deck, Wilder uses images of fairies (and elves, dwarves, leprachauns, etc.) who have come to her in dreams and fairies she has seen in a waking state. She describes these circumstances in the guidebook.

Although the images are not tied strictly to the Rider-Waite-Smith tradition, many of them incorporate recognizable symbols, characters, and activities. For example, The Magician does not stand in his traditional "As Above, So Below" pose, but he does have the four suit symbols on the table before him. The Empress is not pregnant but the flowers surrounding her remind us of that card's association with fertility and regeneration.

The Hanged One (Trump 12) shows a woman hanging by her neck (instead of a man hanging by his ankles). An overturned stool lies under the woman's dangling feet, and she appears to be struggling with the rope around her neck. Yet Wilder tells us that "she is actually only testing the full extent of her own powers, fully confident that she will be able to free herself." Wilder also notes, "she has no fear of death, since it is merely another experience necessary for the growth of one's soul."

Major Arcana cards bear traditional titles and numbers, with Strength being Trump 8 and Justice being Trump 11. 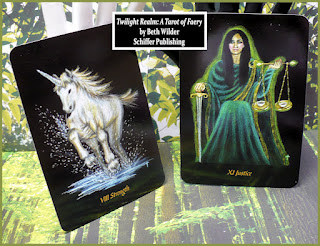 Minor Arcana cards bear their titles at the bottom of each card. The suits are Swords, Wands, Cups, and Rings. Swords are associated with the element Fire, Wands with the element Air, Cups with Water, and Rings with Earth. Instead of Knights, we have two Princes (Swords and Wands) and two Princesses (Cups and Rings).

The guidebook has the following sections:

For each card, a black-and-white reproduction appears in the guidebook. Both upright and reversed meanings are provided. Majors get one and one-half pages of text each; Minors get one page of text each. 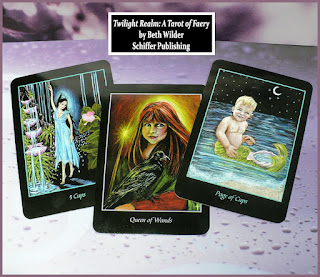 The cards measure 3-1/2 by 5 inches. They are printed on sturdy (but not heavy), glossy stock. They are too large for me to shuffle using my usual push-pull method.

Card faces have wide black borders, which are bound to put some people off. If you like to trim the borders, I think you can do this with Twilight Realm without destroying anything of value. You'll probably want to preserve a portion of the border at the bottom of the card on which the card title appears -- unless you like cards without titles, in which case, just slice away!

Card backs are reversible, decorated with a circle of white and purple violets in the center. A criss-cross lattice design forms a rectangular border. 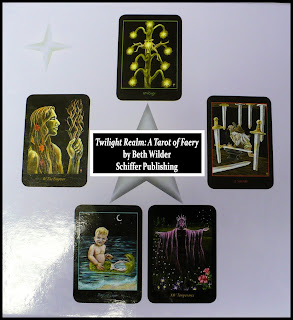 The style of art is realistic -- well, as realistic as possible, considering that many of the characters are (possibly) imaginary. Wilder has seen faeries, and depicts them as she sees them. In this deck, most have human characteristics (faces, arms, hands, body shape -- with occasional wings or mermaid tails). Some are not human in appearance. A decidedly not-human dragon graces the 3 of Swords card. The 2 of Swords is based on an image Wilder saw in the bark of a favorite tree one rainy day.

The colors are dark, deep, moody, and mysterious. Each scene is set against a black background. I get a late autumn or winter feeling from the color scheme -- definitely a sense of shadows and secrets.

In accordance with the FTC Guidelines for blogging and endorsements, I hereby disclose that this product was provided by the publisher for free. Other than the occasional review copy, I receive no monetary or in-kind compensation for my reviews.  The substance of my reviews is not influenced by whether I do or do not receive a review copy.
on Tuesday, October 09, 2012