Journey through My Decks: 8 of Cups (by Zanna)

In this series of posts, I plan to discuss all of the Tarot cards in order, using a different deck for each card. Today I'm exploring the EIGHT OF CHALICES from The Dragons Tarot by Manfredi Toraldo (artwork by Severino Baraldi, published by Lo Scarabeo). 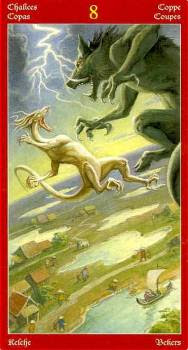 "In the sky of the eight lakes,
the white dragon confronts the
boar dragon but nobody is
interested." (from the LWB)

As we can see by closely inspecting the image on this card, the people on the ground below the fighting dragons are going about their business, looking down or straight ahead. The action in the sky is apparently of little or no interest to them. Maybe they have seen such things many times before, or maybe they are completely absorbed in their everyday cares and responsibilities.

In keeping with the association between the suit of Chalices (Cups) and the element Water, we see several lakes in the landscape beneath the dragons.

My internet search for "boar dragon" netted (pun intended) several references to the creature as it appears in Chinese culture. According to this web page, "the dragon image coalesced into animal head and snake body in the Hongshan cultural period and remained unchanged until the Han dynasty, nearly 4,000 years later."

In Book T*, the Eight of Cups (Chalices) is called "The Lord of Abandoned Success" and is linked with the energy of Saturn in Pisces. Like Toraldo, Aleister Crowley titles the Eight of Cups "Indolence" in his Book of Thoth (Samuel Weiser, Inc). He writes: "Pisces is calm but stagnant water; and Saturn deadens it completely."

When I look at the Eight of Chalices in The Dragons Tarot, I can't help wondering if the people should be paying attention to the fight going on in the sky above them. Are they ignoring something important? Why? Will it matter to them which dragon wins? Do they assume the boar dragon will win? What if he doesn't? Or is it in their best interest to go about their daily activities and let the dragons fight it out?
-------------------------------

* Book T, The Tarot, Comprising Manuscripts N, O, P, Q, R, and an Unlettered Theoricus Adeptus Minor Instruction. A Description of the Cards of the Tarot with their Attributions; Including a Method of Divination by Their Use. A public domain manuscript.