Many thanks to Helen for sharing this exercise and to Tarot Dame for creating it! More details about the exercise can be found here: http://tarotdame.com/. I just had to give this a try using my Faery Wicca deck!

The cards that corresponded with my initials were: 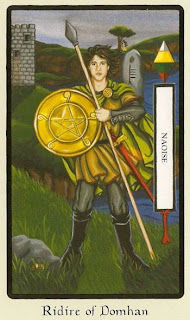 Ridire of Domhan (Knight of Pentacles/Earth)
Well, this is a perfect example of why it’s not a good idea to assume that a Court Card literally represents a specific gender and age. I’m neither young nor a man. However, it could be argued that I have something of the same sort of temperament (in some situations) as a youthful male. In fact, when I was a young girl, I often thought I’d prefer to be a boy because boys got to wear pants all the time (I did not like wearing skirts and dresses). I felt males had more opportunities and options available to them in a number of areas. I was not a “tomboy” and not into sports or anything like that, I just had very little interest in all the frou-frou-lady stuff. Although this Knight is young, he is also viewed as the most reliable, stable, and dedicated of the Knights because of the Earth component. From an astrological standpoint, I have a very strong Earth presence in my birth chart. And yes, I am reliable, stable, and dedicated – I am also very much in contact with my “younger self.” 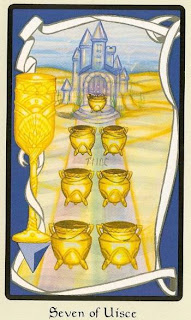 Seven of Uisce (Seven of Cups/Water)
Ah, the card of dreams, fantasy, and poetic sensibility. That fits me very well. I have a very rich dream life and I enjoy reading and writing fantasy and poetry. I also see in this card one of my other traits: a tendency to pursue many different things rather than devoting myself to one and mastering it. It is my choice to do this. I’m pretty sure I would quickly get bored if I focused on one or even two things to the exclusion of everything else. I don’t flit from place to place, but I do have a wide variety of interests and pasttimes. I take delight in a great many things. 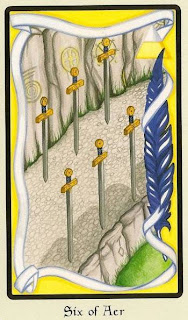 Six of Aer (Six of Swords/Air)
A passage or journey is often suggested by this card, and I can truly say that my life so far has been a journey, or series of journeys, at times toward an unknown destination. There is usually a sense with this card that one is moving *away* from something – a situation, a person, the past. Although the future is unknown, there is also usually a reason to hope for success, although it may not be immediate. The smoothest transitions have occurred when I faced and solved potential or actual difficulties before heading in a new direction.