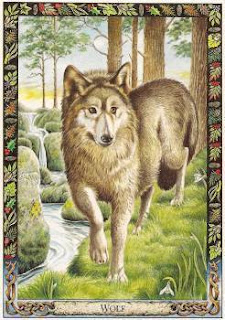 Today I would like to share a card from The Druid Animal Oracle. This was my very first oracle deck, and it is still one of my favorites. The card I am sharing from this deck today is the Wolf. According to Philip and Stephanie Carr-Gomm (the creators of this deck), the Gaelic word for wolf is faol (pronounced foil).

Other details on the card include snowdrops (the flower of the Druid festival of Imbolc at the beginning of February). Indeed, the season depicted on the card is the time of Faoilleach -- the Wolf-month -- which corresponds to the last fortnight of winter and the first of spring (i.e., February).

In Celtic tradition, the Wolf was depicted as a fierce creature, yet it was also seen as highly social, intelligent, and friendly. Its wildness was offset to a large extent by its apparent affinities with humans.

As an Oracle, the Wolf conveys a sense of faithfulness, inner strength, and intuition, along with learning. The Wolf tells us that we have much to gain by spending time alone and that we should not fear loneliness or reject parts of ourselves that we do not yet understand or know.

Merlin, of course, found companionship in a wolf, and this is something we can do -- if not literally, at a spiritual level. We start by examining and questioning the age-old images of wolves as murderous monsters and by exploring the validity of more positive associations.

----------------------------
In addition to my 60 Tarot decks, I own a great many oracle decks. I love these decks, but don't use them as often as I would like. Every now and then, I am going to share a card from one of these oracle decks here on the blog. I hope people will enjoy seeing cards from various decks and will gain something from the interpretations of the cards!