The Twelve Houses of the Zodiac Tarot Spread

I recently came across the Twelve Houses of the Zodiac Spread by Stephen Walter Sterling on line, and I loved the way each house/sign was described in the positional definitions. This spread forms a pattern resembling the astrological birth chart, beginning with Aries and ending with Pisces. 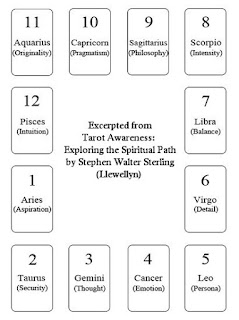 For the purposes of this blog, I am going to do the spread in four “installments.” Part 1 included Houses 1-4. Click _HERE_ to read.

Part 2 includes Houses 5-8. I am using Tarot of the Spirit by Pamela and Joyce Eakins (U.S. Games Systems, Inc.) 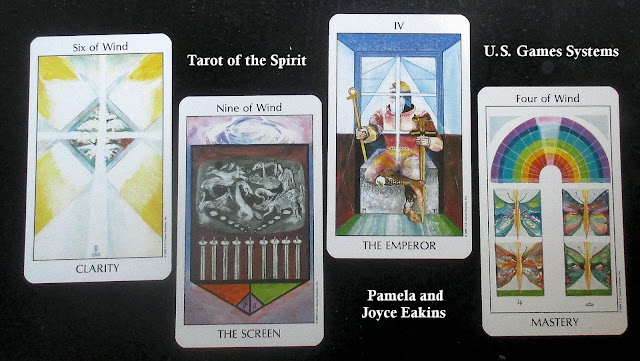 (5) The House of Persona, Leo (Fire): What is your outer self like, the personality that you present to the world? How do you express yourself? Do you face life with courage, with flair?

SIX OF WIND: Clarity (Mercury in Aquarius) / Traditional Name: 6 of Swords
The qualities of Aquarius and Mercury (the mind) suggest that my outer self (the personality I present to the world) is, in many ways, that of an intelligent and free-spirited sort of person with the ability to detach that can cause me to come across as being “aloof” or “distant.” In my birth chart, I actually have Mars in Aquarius in the Fifth House (the house I am currently talking about in this reading). From an elemental perspective, this is a combination of Fire (Leo) and Air (Aquarius). Fire and Air are mutually supportive and both are “active” elements, representing forward motion and getting things done.

(6) The House of Detail, Virgo (Earth): Is your attention to priority reasonable and productive? Are you well organized? Are you being of service?

NINE OF WIND: The Screen (Mars in Gemini) / Traditional Name: 9 of Swords
This card typically refers to feelings of being threatened or in danger. Virgo (which happens to be my rising sign) is known for being worried or anxious about things, perhaps overly focused on details. Gemini is an Air sign ruled by Mercury (the mind, thoughts, perceptions), so these fears may or may not be based in reality. If we think about this type of energy in the Sixth House, we can see where it might be disruptive or interfere with my ability to pay attention to detail, to be organized and productive, and could even affect my willingness or ability to be “of service” to others. Mars/Gemini energy can really rock Virgo’s “down-to-earth” boat.

(7) The House of Balance, Libra (Air): Do the activities of your life add to your peace of mind? Is your distribution of energy well proportioned?

THE EMPEROR (Aries)
Linked with the Fire sign Aries, The Emperor is “swift, male, creative energy” with “clear sight and presence of mind” and “exceedingly well organized.” (from Tarot of the Spirit by Pamela Eakins, Ph.D. / Weiser). This energy suggests that the activities of my life contribute to a sense of stability and security, a sense that things are more or less “under my control” as I “oversee my kingdom.”  One would expect The Emperor’s energy to be “well proportioned.” Again we have the combination of Fire and Air, indicating forward progress and achievement.

(8) The House of Intensity, Scorpio (Water): What is it that you feel strongly about? How do you regenerate your emotions, change how you view your inner atmosphere?

FOUR OF WIND: Mastery (Jupiter in Libra) / Traditional Name: 4 of Swords
Interesting to see this somewhat “stagnant” energy appear in “The House of Intensity.” Pamela Eakins describes the Four of Wind as “a holding pattern,” “resting on your laurels.” We are dealing with the Air sign Libra here, a sign known for being indecisive (mostly because Libra craves harmony and dreads conflict, so it can be difficult to make decisions). One way of interpreting the idea of “Mastery” in “The House of Intensity,” is to consider that perhaps I am at a place “between passions,” so to speak. I have indulged in various things that regenerate my emotions and in a sense, have reached a plateau in those areas. The intensity, therefore, is bound to have faded a bit, creating a bit of a lull.