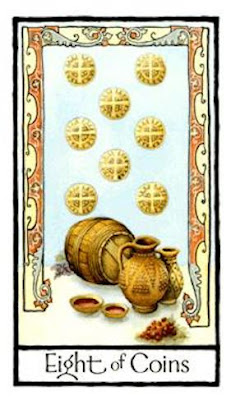 Today’s Old English Card is the 8 of Coins and I’ll be comparing this to its more traditional brother, as usual, the Rider Waite deck. 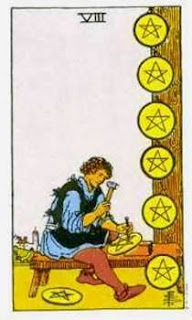 The Rider Waite 8 of Pentacles, as you probably know, depicts a young man working studiously on each pentacle. Here he strives to improve with each one he makes. The card’s fundamental meaning is commitment to a new form of skill. It’s a card that can translate into indicating that hard work will get you where you want to be and an ability to stay with the project in hand. As this is a Pentacles/Coins card, we are looking at the material world and so the other message from this card is: Take a practical approach.

Now it is easy to see and translate the meaning of the Rider Waite image but not so easy with the Old English 8 of Coins. Let’s take a look at the symbolism contained in the Old English depiction of this card.

We have have eight coins arranged in two lines of three with two in the middle - a perfectly balanced arrangement. Beneath this is what looks like a wine barrel, grapes to the back and grapes to the forefront of the card, two jugs of varying sizes, and two bowls. How do we translate this to mean similar to the Rider Waite?

At first look it’s not so obvious, but then we start to ask ourselves some questions: Why are there two jugs with different patterns carved into them and of varying sizes? Why two bowls that differ? What do the grapes stand for? Wine? Maybe, but I think they may mean something a little more deeper.

Grapes: Abundance, reaping the fruits of one’s labour. Achievement through care and attention to the plants. Hard work to gain a good crop.

Bowls & Jugs: If we look at the progress of the carving from the bowls to the large jug with the more elaborate design, then we see a progression of skill has taken place.

So it does appear that the Old English 8 of Coins does have a similar meaning to the Rider Waite 8 of Pentacles - perfecting skills, practice makes perfect, achievement through hard work.

It is the symbols that speak to us within the image of a card, and each modern deck will have its own variation of the core meanings of the Rider Waite. When you see the Old English 8 of Coins in a reading, somewhere in its meaning it’s going to suggest commitment  to gaining an end result.