Will they marry each other?

The matter being considered involves two people who have been dating for some time and are moving into an apartment together.


The question for the cards: Will they marry each other?

First, I will share the answer from the Under the Roses Lenormand deck. 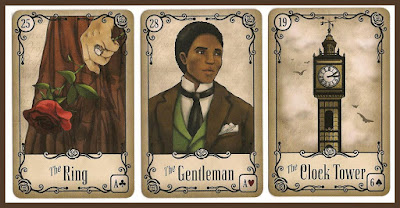 With two black cards and one red, the short answer from the Under the Roses Lenormand appears to be “probably not” or “not likely.”

Having said that, I have to pay attention to each card. “The Ring” is an obvious symbol of commitment and marriage or partnership. As per the LWB for this deck: “Contracts or long-term commitments such as marriage.”

The Gentleman typically refers to a male, man you are close to, partner, friend, etc. His link to the Ace of Hearts suggests an emotional connection, very possibly a romantic relationship.

The Clock Tower, in contrast to the other two cards, can be seen as a card of separation or alienation, as well as objectivity, analysis, and discovery. It can represent an institutionalized perspective (and marriage is, after all, an “institution”).

Among the possibilities I see here is the chance that marriage will be proposed and perhaps an engagement may even be announced, but marriage is not guaranteed. Something is likely to get in the way and present a challenge that could be difficult to overcome.

Now, Helen shares her answer to the same question – Will they marry each other? – using the Joie de Vivre Tarot. 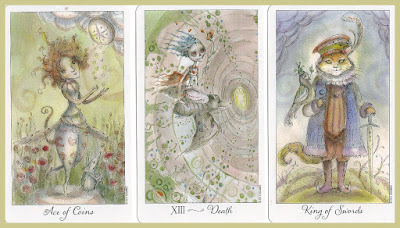 “Well, I shuffled up the Joie de Vivre Tarot and got Ace of Coins, Death, King of Swords.  The tarot seems to think that they probably will not get married, from what the other two cards indicate, there is going to be a change, hard decisions have to be made, but in the end the right one will be acted on and this will bring about a change in circumstances. The Tarot indicates that this relationship will come to its natural end, nothing will change that, and the King of Swords tells me that the decision that brings this about, has been well thought out.

If we look at the Ace which is Coins this reinforces the other two cards, regarding change by indicating that a new beginning and growth will be embarked upon.  When you look at the three cards together, notice how the Ace of Coins figure faces Death, but Death is flying away from her, and towards the King  of Swords.

It appears then that in the system I use, the fact that there is only one Ace indicates that probably (not definitely) they will not marry, and the death card particularly in this image, indicates moving on from one situation to the next. Death does tell us not only is there change in the air, but that something is coming to a natural ending, the King just tells me that the hard decisions will be made in order to get the best result.

Remember though the cards are saying probably not, they are not saying a definite no.”

Helen and I have reached similar conclusions about this matter, with the cards stacked 2 to 1 against the likelihood of marriage.