Sherlock Holmes Card of the Day: 7 of Observation

The Sherlock Holmes Card of the Day is:
SEVEN OF OBSERVATION
7 of Swords 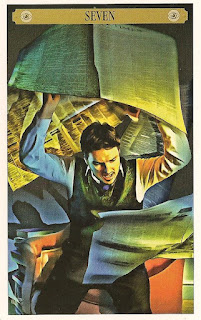 The Seven of Observation is taken from The Adventure of Charles Augustus Milverton, in which (to our eternal astonishment and dismay) Sherlock Holmes actually “gets it wrong.” His attempt to burgle the house of the master blackmailer results in the death of his client.

Dr. Watson, in an effort to conceal the blunder, changes the date and certain other details of the case so that the actual events and participants cannot be identified. However, in The Yellow Face, Holmes reveals that if he ever thinks too highly of himself, he knows that Watson will remind him of “Norbury,” the setting of his failure.

On the Seven of Observation we see Holmes as he becomes aware of his mistake. He scatters his newspapers in his haste to set matters right.

The Holmesian Wisdom for this card is a quote from Silver Blaze. “I made a blunder – which is, I am afraid, a more common occurrence than anyone would think.”

Keys for this card, upright, are: “unstable effort, self-deceit, plans fail as a result of unclear thinking, passivity, over-defensiveness, the need for better conceptualization.” Reversed, the card can suggest “advice, warning, prudence, slander.”

The book that accompanies this deck also provides interpretations for each card under the headings “The Game” and “The Fog.” The former elaborates on the upright keys, while the latter expands on reversed meanings. Examples from “The Game” for the Seven of Observation: “Little progress. Mistakes are made. Quick thinking, decisive action or improvisation. . . Spying on your partner. . . Strategy may win the day.” Examples from “The Fog”: “Fear of being caught out. . . Feeling vulnerable. . . Regretting lost moments. Getting someone to spy for you. Trying to discern the hidden agenda in a friendship.”