Sherlock Holmes Card of the Day: Lady of Analysis

The Sherlock Holmes Card of the Day is:
LADY OF ANALYSIS
(Queen of Cups / Violet Smith) 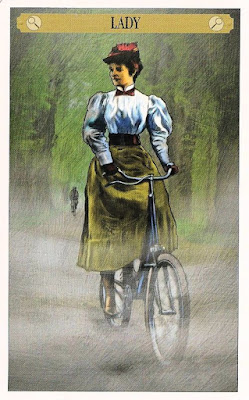 The quotation chosen to represent the entire suit of Analysis is “There are fifty who can reason synthetically for one who can reason analytically” from A Study in Scarlet. This comment is made, as you might expect, by Sherlock Holmes himself. It is prefaced by the following: “In solving a problem of this sort, the grand thing is to be able to reason backwards. That is a very useful accomplishment, and a very easy one, but people do not practise it much. In the every-day affairs of life it is more useful to reason forwards, and so the other comes to be neglected.”

The Lady of Analysis is Violet Smith, heroine of _The Adventure of the Solitary Cyclist_.
Violet Smith is a music teacher, described by John Watson as “a young and beautiful woman, tall, graceful, and queenly.”

The Holmesian Wisdom for the Lady of Analysis is “It is part of the settled order of Nature that such a girl should have followers,” spoken by Holmes himself in The Adventure of the Solitary Cyclist.

The book that accompanies this deck also provides interpretations for each card under the headings “The Game” and “The Fog.” The former elaborates on the upright keys, while the latter expands on reversed meanings. An example from “The Game” for the Lady of Analysis: “Empathic and foresightful, she can see into your condition, sometimes bringing comfort, sometimes disturbing your mood. . . being emotionally mature. . . dreams and visions.” Examples from “The Fog”: “While she can cherish and take care, she may sometimes seem over-protective or smothering. . . captivity to illusion. . . being over-sensitive.”

I think the choice of Violet Smith for the “Queen of Cups” is an excellent one. She is a modern (for the times), strong woman who takes the initiative to get to the bottom of a disturbing situation by enlisting the assistance of Sherlock Holmes.