Journey Through My Decks: King of Wands

Those who have been following my Journey Through My Decks series know that somehow I left out a few cards along the way, so I am now writing them into the series.

My worst transgression, by far (according to the King of Wands) was skipping over the entire Wands court. Egads. I must remedy this as quickly as possible!

So without further ado, today we have the KING OF WANDS from the Ghost Tarot, with artwork by Davide Corsi (Lo Scarabeo). 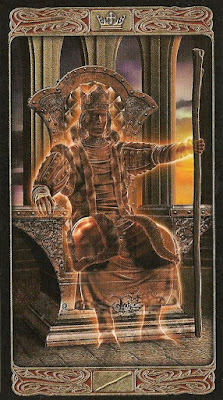 The descriptions of these cards in the Little White Book (written by Pierluca Zizzi) are brief and to the point. For the King of Wands, we read: “The Spirit of the Leader. A common direction is what makes many better than one.”

Like the other Wands cards in this deck, the King is bathed in a reddish glow. The background of the scrolling design around the border is dark red. Red and orange are Fire colors, the colors of flame and passion, linked with the Fire signs of the zodiac (Aries, Leo, Sagittarius). The darkness on this card makes me think of a fire smoldering, suppressed – at least temporarily – but always ready to burst into flames if enough oxygen is provided. Through the window we see both bright sunlight and a dark purplish sky.

A crown resides, centered, at the top of the card, and a Wand at the bottom. The King holds a “big stick” worthy of _Teddy Roosevelt_ in his left hand. Does this mean the King follows the left-hand path? One description of that path reads: "The left-hand path focuses on the strength and will of the practitioner, downplaying the need for intercession by any high power (although they may believe a higher power exists)." (Source: _About Religion_ web site). I can see that as a possibility.

The King's face is dark, but if you look closely at it, you can see that he is staring straight at you with a serious expression. 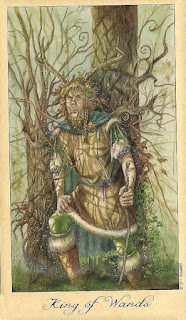 The Ghosts and Spirits Tarot by Lisa Hunt (U.S. Games Systems, Inc.) shows us quite a different image for the King of Wands. In her deck, he is portrayed by Herne the Hunter, an “imposing ghostly figure on a phantom steed” who appears in Shakespeare’s The Merry Wives of Windsor. Lisa writes: “Someone in the position of authority may offer advice. You may need to assume a leadership role and be willing to take risks to make things happen.”

Here, then, is the assertive, assured, risk-taking CEO of the company. Whether seated on a throne or tramping through the forest, he exudes pride, strength, and confidence. We all have this King within us, available for guidance and support, ready to propel us forward when we are in danger of losing our nerve.
on Wednesday, July 29, 2015