Journey Through My Decks: Knight of Pentacles (Disks)

Here is one that I overlooked as I skipped merrily from the Page to the Queen of Pentacles (Disks). Probably not a good idea to offend the Knight of Pentacles. I apologize!


The Hudes Tarot
Knight of Pentacles 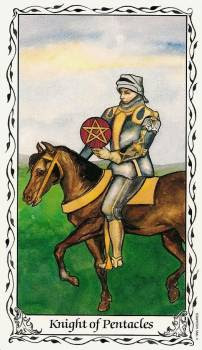 In Wisdom in the Cards, Inspired by the Hudes Tarot Deck (U.S. Game Systems, Inc.), A.L. Samul writes: "Pentacles are. . . associated with manifestation, physical items and things of the material world" -- for example, objects that we can touch, the physical body, and money. Pentacles also represent "the much-needed grounding that enables us to use the energy of the other suits."

In the Hudes Tarot Deck by Susan Hudes (U.S. Games Systems, Inc.), as in many other decks, all four Knights are associated with the element Fire. Thus, the Knight of Earth represents Fire acting on Earth. According to The New Encyclopedia of the Occult by John Michael Greer (Llewellyn Publications), Fire is positive, hot and dry -- its nature is energy; Earth is negative, cool and dry -- its nature is stability.

Earth under the influence of too much Fire is likely to be baked, fried, broiled, scorched, or blackened. But Fire is also necessary for the growth of some plant species, and is part of the ecological cycle. Fire can offset Earth’s tendency toward laziness, stagnation, and stubbornness -- counteracting Earth’s resistance to change.

The dominant colors on this card are green and brown, commonly viewed as Earth colors. However, the presence of gold indicates a solar (Fire) influence.

Unlike some Tarot writers, Samul doesn't view the Knight of Pentacles as an actual person, but more as a type of energy that impacts people and situations. Certainly, an individual person could be involved, but Samul's description allows for a broader interpretation.

Upright Divinatory Meanings from Samul: Transformation. Changes that have a deeply layered effect on a person or on a situation. Reversed or ill-dignified, this card could indicate "Change that takes a situation or person to a virtually unrecognizable level of existence. Or energy that decimates whatever it comes in contact with."

Samul provides an Affirmation and Prayer for each card in the Hudes deck. Her Affirmation for the Knight of Pentacles is: "I invite transformation into my life. I have the strength to withstand explosive energy by using it to change me in deep ways."


Note: My interpretations of colors and descriptions of elemental qualities are based on personal experience and many different sources accessed over a period of several years.