Week at a Glance: 2 of Deniers

For the week of February 24, 2013 I am using the 1JJ Swiss Tarot published by AGMuller in Switzerland and distributed by U. S. Games. Versions of the 1JJ Swiss have existed for over a century. One was created by Swiss cardmaker Johann Georg Rauch circa 1831-1838. I owned this deck in the 1970s but was convinced to get rid of it by my then-husband. I later got rid of him, and picked up another set of the 1JJ Swiss cards.


My card is the TWO OF DENIERS
(also known as Pentacles, Coins) 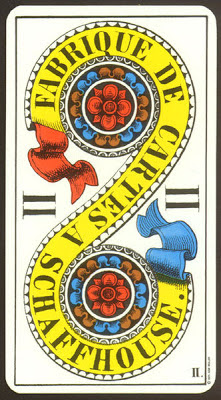 As you may recall from last week's Week At A Glance post, my mother was hospitalized after a fall, while I was still trying to get over a bad cold/bronchitis. I am feeling much better. Mom has been transferred to a rehabilitation hospital, and the staff thinks she will be able to go home on Friday. She lives alone, so my siblings and I will be reconfiguring her house, getting it ready for her. We'll be making decisions about what sort of in-home care she needs, etc.

So... Two of Deniers. The 1JJ Swiss deck has "unillustrated" pips, meaning that there are no scenes or people on the pip cards. The image on the Two of Deniers communicates balance and harmony to me, with equally sized ornate disks at top and bottom, fitted into a graceful "S" shape. The number Two commonly suggests an emphasis on balancing polarities/dualities, choices, partnership, cooperation, union, and possible tension. The suit of Deniers is the suit of Earth, representing life in the physical, material world (including domestic activities, health, finances, property).

Taking all of this together, I can easily see how it would apply to the upcoming week. Cooperation will most certainly be required among my family and myself, not to mention my mother! Possible tension? Yes. Choices? Yes. The importance of keeping things balanced and harmonious is obvious.
on Sunday, February 24, 2013