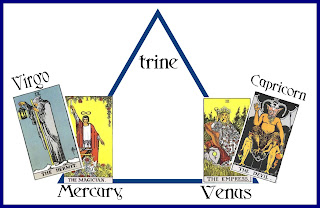 In Tarot terms (using Golden Dawn attributions) we have The Magician under the influence of The Hermit making nice with The Empress under the influence of The Devil. Yikes. Okay, this actually sounds like a marriage made in heaven for any creative projects I might want to work on. I'm making jewelry these days, and a Mercury/Virgo - Venus/Capricorn trine provides a lot of supportive energy for that.

Mercury rules Virgo and is very strong in that sign. The fact that both Virgo and Capricorn are Earth signs adds practical, determined, and stable influence to the mix. So my creations are likely to have considerable value and attention to detail. Mutable Virgo incorporates flexibility and Cardinal Capricorn provides initiative.

As they proclaim in those TV commercials -- "But wait! There's more!" 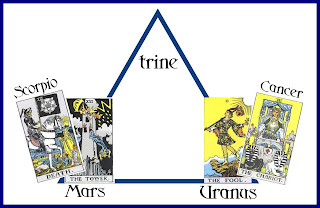 Traditionally, Mars rules Scorpio and is very strong in that sign. Scorpio and Cancer are both Water signs, which suggests my attachment to the status quo might be strongly emotional and/or subconscious.

All in all, I'm looking forward to experiencing and working with the energy represented by these two transits and the cards linked with the planets involved.
on Tuesday, September 04, 2012