In the Stars: New Moon in Pisces

Today we have a New Moon in the first decan of Pisces. In honor of that event, I am doing a reading featured in Anna Cook's most recent Tarot Dynamics Unleashed (TDU) newsletter. I encourage you to hop over and read it, then try this spread for yourself!

Joining me for this reading is Tarot of a Moon Garden (U.S. Games Systems, Inc.). 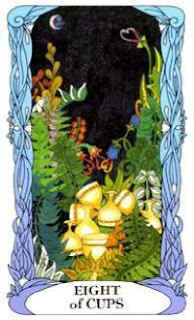 In the TDU system, the Tarot Card of the Week is the Eight of Cups (linked with the first decan of Pisces). Therefore, for this spread I place that card face up. It represents me and the general mood or tone of the week ahead.

Anna Cook tells us that the Eight is one of three cards (8, 9, and 10) that indicate "an upcoming opportunity, setback or new phase of awareness that will inflate or deflate the Seeker’s sense of future stability, optimism, understanding and sense of achievement. . . . Like the 8th House in Astrology, our 8’s can provide clues concerning the stability of the Seeker’s future with anything or anyone that is important to them, such as health, source of income, or the health and prosperity of those they care for."

The suit of Cups is associated with the element Water, representing emotions, relationships, and the subconscious.

After placing the Eight of Cups upright, I shuffle the cards, pull one, and place it face down across the Eight of Cups. This card signals whether it’s likely to prove a little easier or a bit more challenging for me to deal with people and matters this week.

I pulled The Magician. 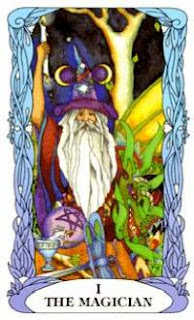 In their book Numerology and The Divine Triangle (Schiffer Books), Faith Javane and Dusty Bunker assign the planet Mercury to The Magician card and the planet Mars to the number One (Mars rules Aries, the first sign of the zodiac). The energy of these two planets combined is fiery, creative, intellectual, and focused. The Tarot Dynamics system describes The Magician as a card of Self-Reliance, the ability to handle or confront anything.

From an elemental standpoint, I see a challenge and the potential for instability. Water (Cups) and Fire (Mars) are antagonistic toward each other. Water (Cups) and Air (Mercury) are neutral toward each other. I get the feeling that I could be frustrated if I attempt to demonstrate self-reliance, creativity, and control with my trademark Sagittarian impulsiveness, impatience, and excessiveness.

The mutable Water sign Pisces is famous for being emotional, impressionable, imaginative, and intuitive. Not only do we have a New Moon in Pisces, but Neptune (modern ruler of Pisces) is conjunct the Moon, creating additional Pisces Power.

In my dealings with people and matters this week, I will probably need to tone it down, mellow it out, and/or go with the flow rather than leading a one-person parade. I need to take care that I don't come across as an overly ambitious control freak who relentlessly pushes her own agenda, disregarding other people's feelings and opinions. I can be sensitive and considerate when I want to.

At the same time, if I can channel  that fabulous Magician energy properly, I may be able to use Water and Fire to create steam, a powerful force.

It also occurs to me that these two cards may represent the opposite of what I just described. In other words, I may be the one whose dreams get quashed by someone wielding his Magician's wand a bit too energetically. If so, the key is probably to relax, listen, and seek whatever benefits and truths I can find in the situation.
on Tuesday, February 21, 2012