For this series, I will be exploring the choices of animals made by various deck creators to correspond to traditional Tarot cards. My initial goal is to get through the Major Arcana using cards from seven different decks:

Now let’s look at how The High Priestess is portrayed in these seven decks. 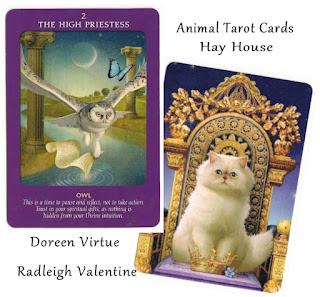 OWL (“This is a time to pause and reflect, not to take action.”) – On this card, an owl glides over the water that flows between two pillars, dipping the tip of the scroll he carries into the water. Although this particular owl is “taking action,” owls are often seen sitting silently in a tree, observing, contemplating, and perhaps even reflecting. With perfect night vision, owls wait for the perfect time to take flight in pursuit of prey. Owls represent both knowledge (information) and wisdom (experience), making them an excellent choice to portray The High Priestess. 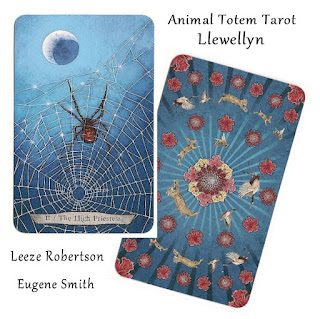 BLACK WIDOW – “But I know who I am and each and every day I honor my divine self by being true to my vision of myself who I am.” Robertson begins by pointing out that this “small, unassuming, nocturnal creature” who “prefers silence and solitude over the spotlight” has nevertheless become “one of the largest archetypes both on and off the silver screen.” Robertson compares the black widow spider to The High Priestess by writing that both of them have “transcended the limits of manmade boundaries, labels, and restrictions.” In that sense, I do see how this spider can play the part of The High Priestess, although I have been conditioned over time to fear the black widow and to think of it as sinister and threatening, qualities I would not associate with The HP. 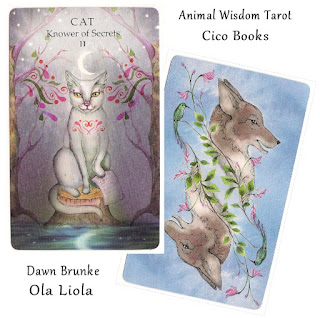 CAT (“Knower of Secrets”) – Brunke offers “Mystery, Knowledge, Awareness, Intuition” as Keynotes for this card. The message she assigns to the card is “Still and silent, seek wisdom within.” Having living with cats my whole life, I can easily see a cat in the role of The High Priestess. When I look at the traditional Rider-Waite-Smith High Priestess card, I have no trouble replacing the woman in that image with a cat. As a Knower of Secrets and Guide to the Mysterious, the Cat calls us to consult our dreams, pay attention to our inner visions, and fine-tune our instincts. As Brunke puts it, “Cat helps us to realize the supernatural is simply natural – an expanded part of our true self.” 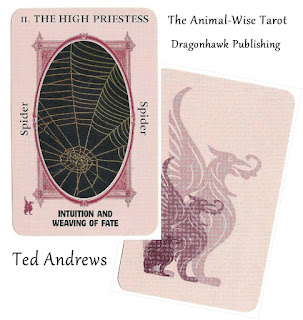 SPIDER (“Intuition and Weaving of Fate”) – Here we have another deck which, like The Animal Totem Tarot, uses a spider to represent The High Priestess. Ted Andrews writes that spiders “signal an awakening of our creative energies.” He adds that the spider reflects three kinds of magic at play within our life: the magic of creativity, the magic of assertion, and the linking of past and future, death and rebirth, waxing and waning (reflected in the web’s spiral). As I mentioned above, I can see why the spider might be chosen to represent The High Priestess, but I always think of a spider’s web as a place where it traps its prey and kills them, which doesn’t quite match how I view The High Priestess sitting between the two pillars. 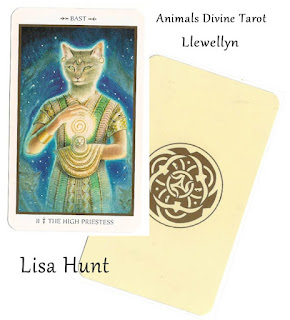 BAST (seeking knowledge, following intuition) – Lisa Hunt chooses the ancient Egyptian cat goddess Bast for her High Priestess. A benevolent deity, Bast protected the population from vermin and assured fecundity and health. She was associated with the lunar mysteries of the night, an association that reaffirms her connection to The High Priestess card, which the Order of the Golden Dawn links to the Moon. As mentioned above, the nature of the cat seems very much in keeping with the qualities associated with The High Priestess. 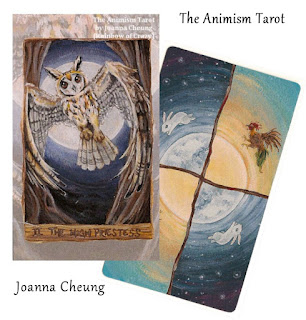 STRIPED OWL (rebirth, knowledge, secrecy, foresight, intuition, inspiration) – Like The High Priestess, the owl in this deck represents “the insight and wisdom found deep within.” With her power drawn from the moon, she links the conscious and unconscious. A creature of the night, the owl nevertheless brings the light of knowledge into the darkness, revealing what we otherwise could not see. 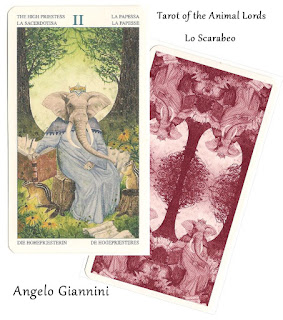 COW ELEPHANT – The elephant is a marvelous choice for The High Priestess, in my opinion, given the qualities we associate with both.  Although elephants can be unruly and aggressive (particularly the males) in certain situations, for the most part we see them as gentle giants who care for the other members of their herd much as humans care for family members. The herd is led by the oldest and often largest female in the herd, called a matriarch. Elephants are extremely intelligent and have memories that span many years. The instructions by Bepi Vigna offer the following keywords for the upright card: study, wisdom, mystery. Reversed, the card can indicate hysterics, selfishness, ignorance.

The tally for animals portraying The High Priestess in these seven decks:
OWL – 2
SPIDER – 2
CAT – 2
ELEPHANT - 1

I think, if forced to choose, I lean towards the Owl as an animal representative of The High Priestess, with the Cat a close second. I appreciate the effort to give spiders the respect they no doubt deserve, and I do love the idea of the elephant in her blue dress, but they don’t quite resonate with me the way “the owl and the pussycat” (LOL) do. What do you think?