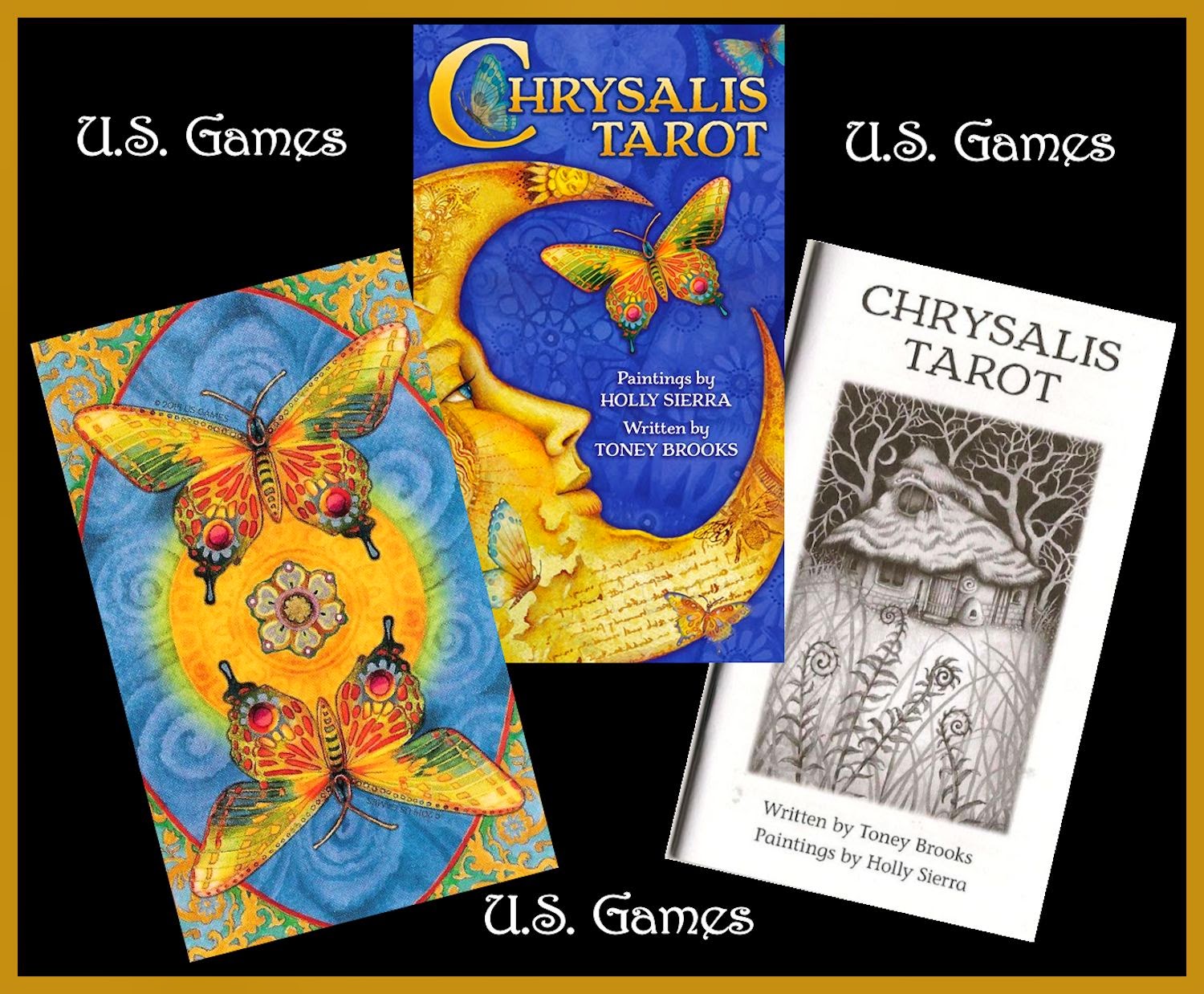 Although I do enjoy Tarot decks that focus on one theme or cultural foundation, I love decks like this that incorporate multiple traditions or myth systems. To me, this approach reminds us that similar archetypes and motifs appear across a wide range of spiritual paths. I love the idea of Merlin, Ariadne, Bella Rosa, Kali, and Papa Legba joining forces to create a Major Arcana for a Tarot deck. It’s a Sagittarian’s dream come true!

Holly Sierra’s enchanting art and Toney Brooks’ engaging writing create a world that welcomes, enriches, and entrances. Each exquisite card opens a window into a land where we can expect to find magic, truth, and our Selves.

While there are some similarities between these cards and those in the Rider-Waite deck, there are also enough differences that I would not recommend this deck for someone who wants to learn “traditional Tarot” as a first step on their Tarot journey. In many cases, it will probably be necessary to consult the Little White Book (LWB) that accompanies the deck to get the most out of a card’s setting and symbolism. The _Chrysalis Tarot web site_ also offers useful and inspiring information and discussion of the deck.  I found an Ancestral Council spread there that I am eager to try using this deck. 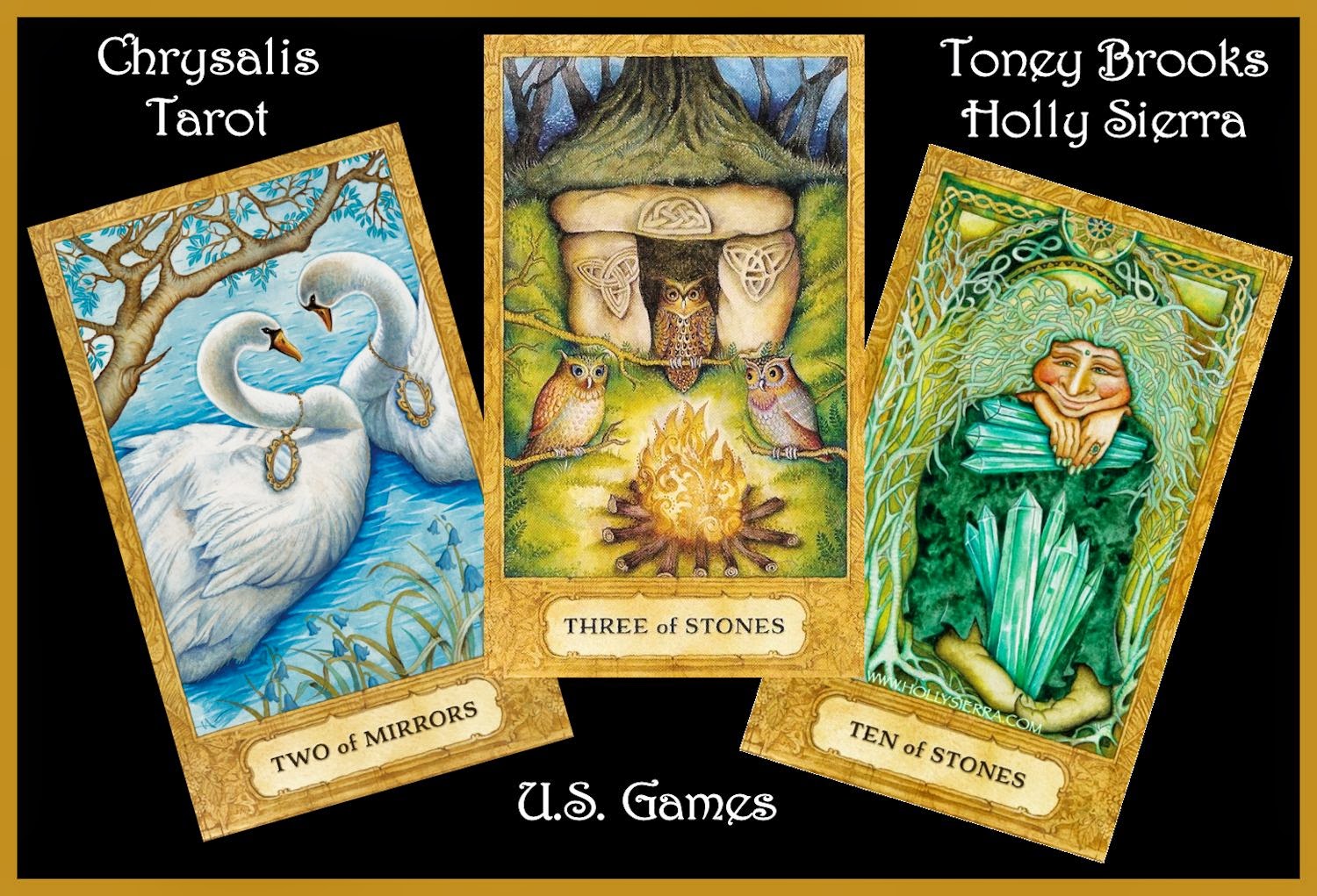 
“Chrysalis Tarot opens up your psyche and illuminates your path toward personal destiny. Exquisitely drawn Otherworld characters and mythological archetypes guide you on your spiritual quest. Both the Major and Minor Arcana feature beautifully illustrated scenes that inspire reflection and stimulate your psychic intuition and imagination. The four suits that make up the Minor Arcana are: Stones (Pentacles); Mirrors (Cups); Spirals (Wands); and Scrolls (Swords). In the Court Cards you’ll meet a delightful troupe of medieval messengers who inspire you to fulfill your dreams. Deck includes 78 cards and 60-page booklet with instructions for a five-card Pentagram Spread.” 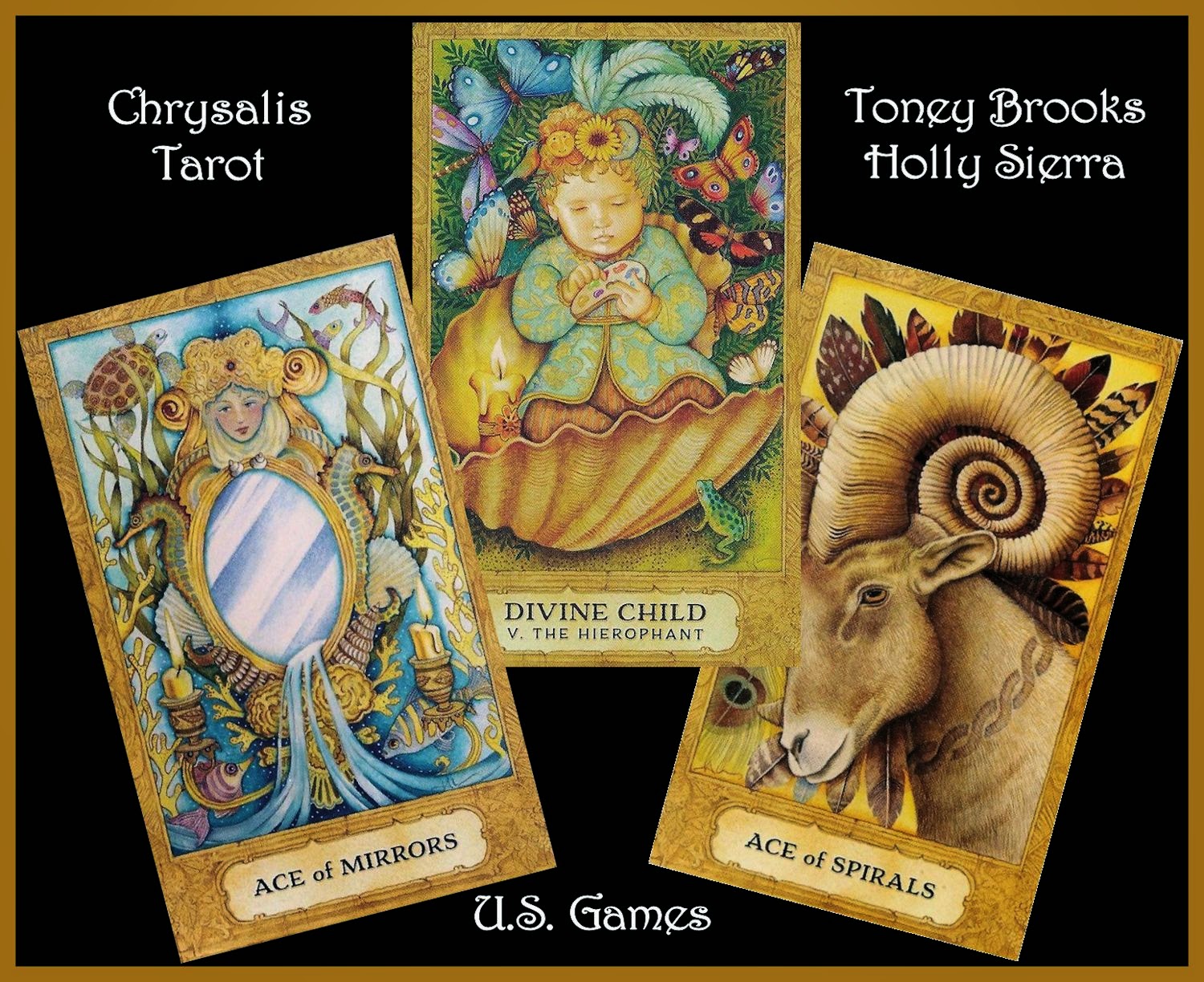 A chrysalis is the transformation stage between the larva of a butterfly and the adult butterfly, a sheltered stage of being or growth. The butterfly caterpillar actually hardens into a chrysalis during its pupal stage. To me, this suggests that when working with this deck, I am in a protected space, in the process of evolving to the next level of my existence as I undergo a transformation.

In the Introduction to the LWB, Toney Brooks writes: “By your side on your quest for self-fulfillment is an unseen force. It’s an energy field known by many names and recognized by many masks; a force that informs your psyche and nudges you forward. In the Chrysalis Tarot, we refer to this force as the Otherworld.”

The Court cards are portrayed by medieval troubadours. Both sexes are equally represented, and each court card has an animal association. 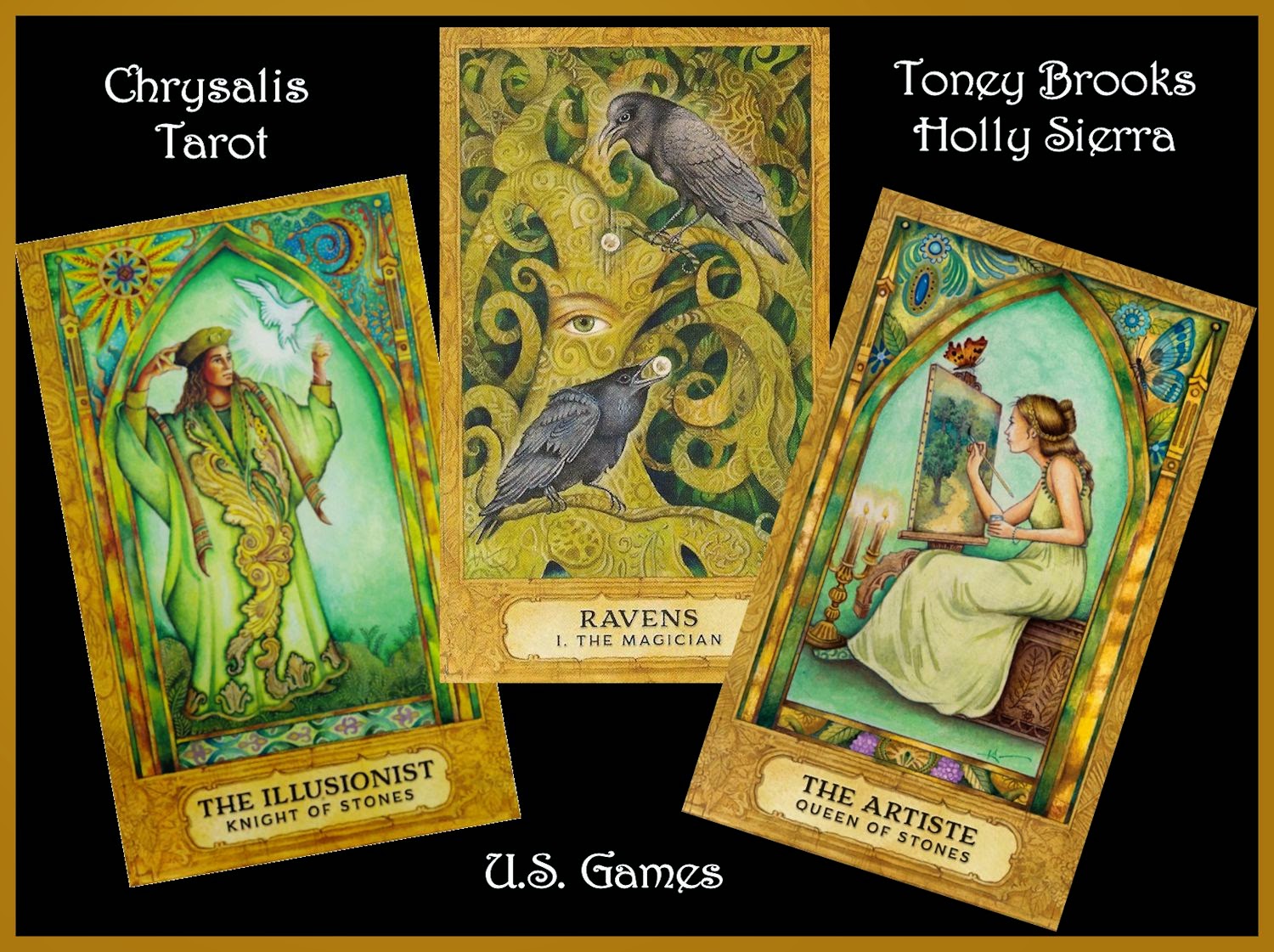 The Majors are Otherworld characters and archetypes with traditional and nontraditional titles: 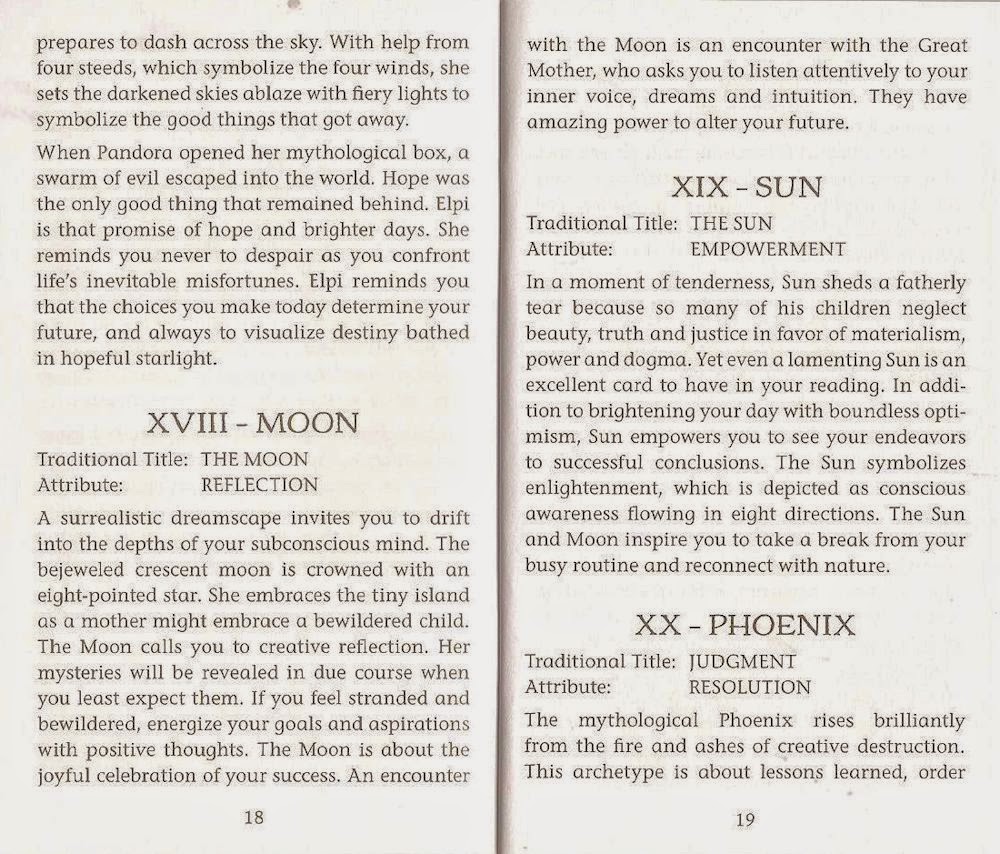 Toney Brooks writes that the pip cards “feature scenes that inspire personal reflection and stimulate your psychic intuition and imagination.” He tells us that the Court cards “represent real-life messengers inspired by the Otherworld to assist you, especially at critical moments and troubling crossroads.”

At the end of the LWB we have the Pentagram Five-Card Spread featuring positions for Spirit, Earth, Water, Fire, and Air.

About Toney Brooks
After retiring from broadcasting twenty years ago, Toney traveled the world researching spirituality. He studied, both formally and informally, a number of metaphysical subjects including comparative mythology, philosophy of history, and an obscure area of theology known as Mariology. He holds a PhD in Metaphysics and a certification in Spiritual Counseling.

About Holly Sierra
Holly Sierra has been drawn to all things mystical and magical since her childhood. Her vibrant paintings allow us a glimpse into an enchanted world filled with goddesses and mythological creatures. Holly’s infatuation with Tarot began when she was a teen and discovered an antique deck amongst her parents’ possessions. The Chrysalis Tarot deck is dedicated to both her beloved parents. After pursuing a fine arts education, Holly lived and traveled extensively in Asia. Multicultural themes influence her artwork, which has appeared in children’s books, magazines and greeting cards. Holly makes her home amidst the picturesque, green mountains of Stowe, Vermont.

The cards are 2 ¾” by 4 ¾”. The finish is what I would call “semi-gloss” – with a pleasant, light-weight shine. The stock is sturdy and invites shuffling, whatever your method.

The card faces have a patterned gold border. At the bottom is the card title in black lettering against a parchment colored background. The Majors have both the new (deck specific) title and the traditional title at the bottom in every case except Trump Zero, which is labeled “The Hero” instead of “The Fool”. 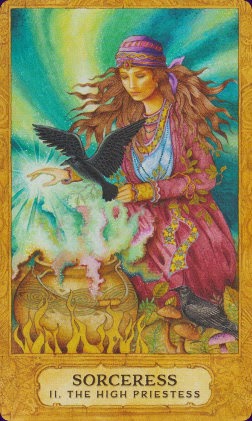 The card backs, which are reversible, have a gold and blue pattern in the corners. Centered as a backdrop is a blue spiral-covered oval. Within that is a gold circle, with a mandala as its center. Large multi-colored butterflies appear on either end of the gold circle.

The coloring on the cards is bright yet soft, vivid yet gentle, and the images are realistic yet imaginative. The scenes on the cards arise from many traditions, including Greek, Arthurian, Celtic, Pagan, Egyptian, Hindu, New Age, and Haitian Vodou. At the same time, the deck has a cohesive feel thanks to a consistent style and coloration. Each image invites exploration of the details and symbolism, evoking emotions and stimulating the imagination.