This post contains a reading for a friend who is going through challenges in the area of career.

My friend has worked for the same company for more than 20 years. During that time, she worked her way up to a high-level position. The company is now “restructuring” and my friend finds herself in competition with another woman for the top position in the restructured organization.

I am using The Prague Threshold Spread, which I believe was created for use with the Tarot of Prague by Karen Mahony and Alex Ukolov (The Magic Realist Press).

I am using a deck gifted to me by my dear friend and former blog partner, Helen, when I met her in person on my recent trip to Australia. This is The Llewellyn Tarot by Anna-Marie Ferguson (Llewellyn Publications).

Here is the layout: 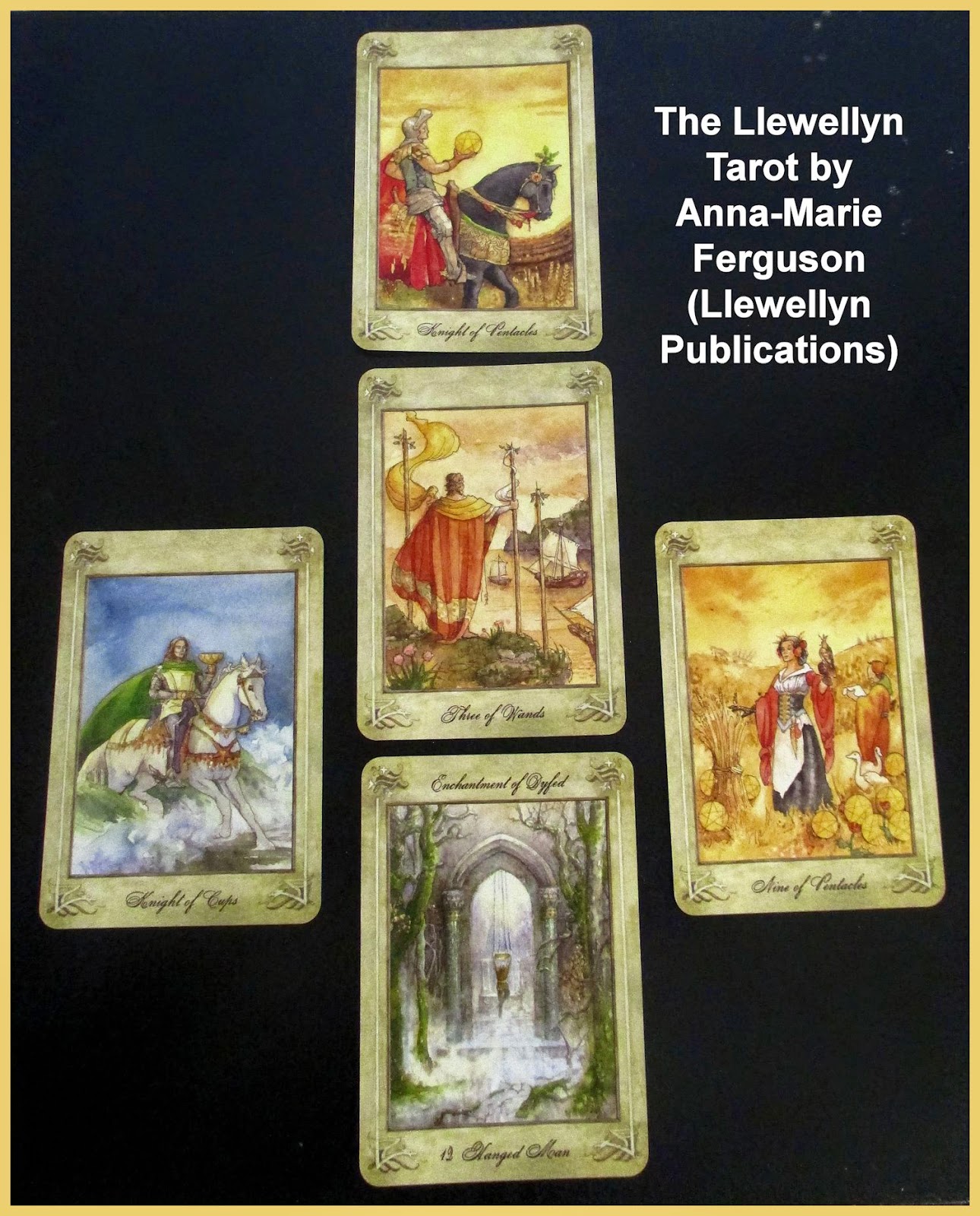 (1) Current situation: HANGED MAN
Well, that’s certainly appropriate! Her company is playing “upset the fruit basket” with its employees and organization, looking at everything from different perspectives, turning the status quo “upside down” in an effort to improve matters. According to Welsh myth, the land of Dyfed was placed under an enchantment that suspended the lives of all inhabitants but four. Talk about downsizing!

The KNIGHT OF CUPS can represent a romantic or artistic person, but also a proposal or collaboration. The suit of Cups is the suit of relationships. In this case, I am thinking there is a person with whom my friend has a positive relationship and that this relationship will play a role in what happens to her job, or it may refer to the importance of various relationships she has cultivated over the years.

In the NINE OF PENTACLES, I see a message for my friend to assess and tally up all her many contributions to this company, her successful handling of (as the book accompanying this deck puts it) “a multi-faceted venture.” Her ability to plan, network, and “get things done” is well known in the region, and she needs to make sure the powers that be are aware of these abilities and achievements.

(4) Influence that lies over the steps being taken: THREE OF WANDS
Yes, the company wants to investigate new directions and redistribute energy and resources. Although technically not launching a completely new enterprise, there is an emphasis on change and restructuring to create something different. My friend needs to show that she can be a vital part of this, that she is in sync with the company’s vision and goals.

(2) What lies on the other side of the gateway (outcome): KNIGHT OF PENTACLES
As an outcome, the KNIGHT OF PENTACLES suggests the triumph of tradition, orthodoxy, and utility. Dedication, dependability, and perseverance will be rewarded. The person with the steadiest hand and firmest commitment will be chosen to take the helm. Even though the suit of Pentacles is “passive,” all Knights are “active,” so this person cannot be one who sits around waiting for things to happen. I also see an indication in this card that money is a factor, perhaps a consideration of how much money the person in this position brings in vs how much money is paid to them in salary?

FOLLOW UP: My friend did not get the job. The person in charge told her that she was qualified for the position, but he had to make a choice.