Review: Tarot Beyond the Basics 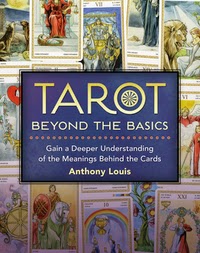 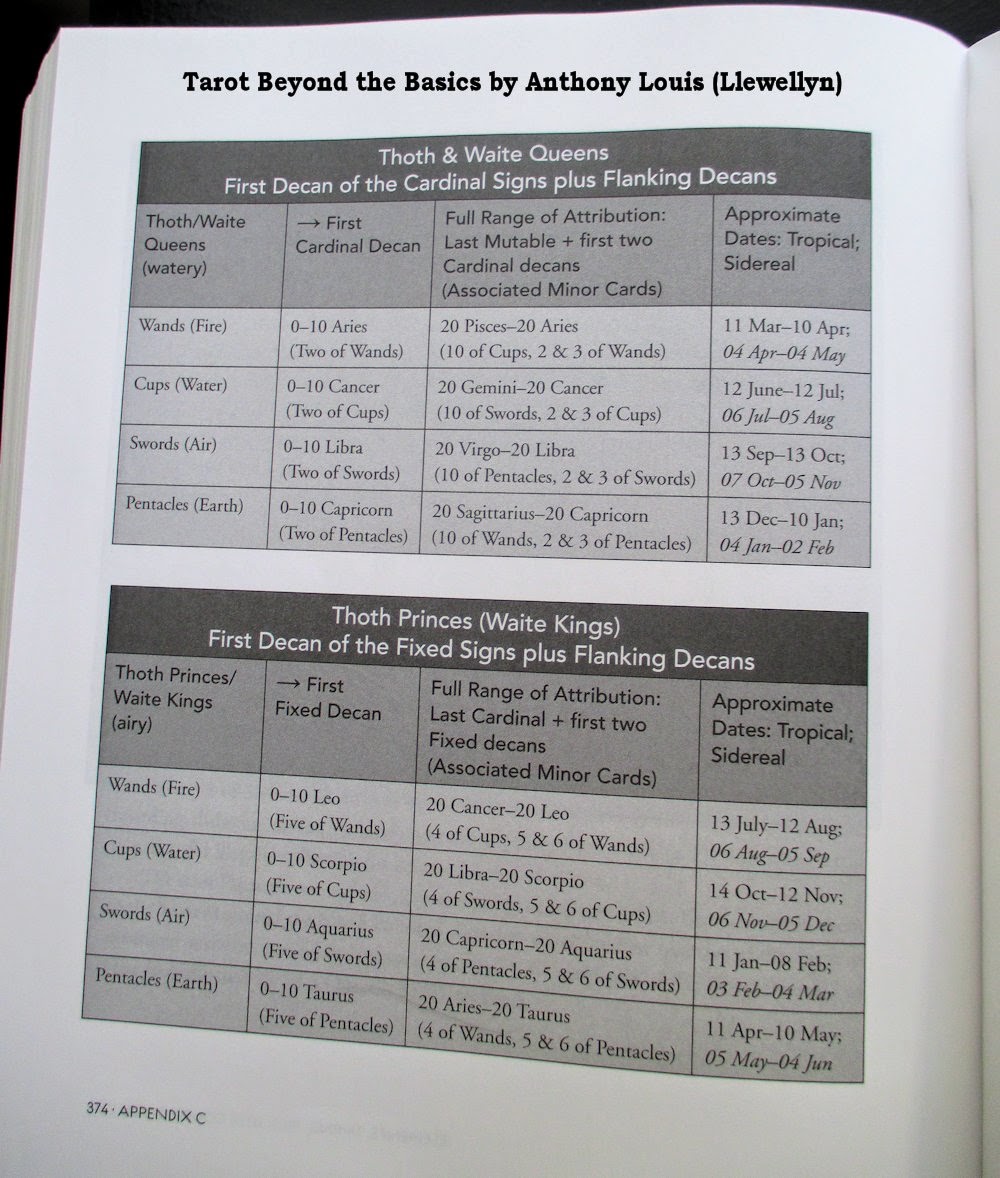 First of all, you probably need to know that I have been a fan of Anthony Louis for a long time. Among my all-time favorites are his books Tarot Plain and Simple and Horary Astrology: Plain & Simple (both published by Llewellyn). However, that did not automatically make me love Tarot Beyond the Basics. The love affair began when I was barely into the book and could not resist immediately trying some of things Louis was showing me.

For example, “Using Tarot to Delineate the Ascendant” revealed to me that the Ten of Pentacles (Coins / Wealth) and Three of Pentacles (Coins / Works) are of major significance in understanding my life force and basic motivations (watch for a separate blog post on this!) The section on “Using the Tarot with a Horary Chart” motivated me to take a look at the Tarot implications of a horary chart I recently cast.

Even the appendices are fabulous. Appendix A -- “Keywords for the Suit Cards” -- offers so much more than the title suggests. It is followed by the equally fascinating and useful “Waite’s Original Conception of the Celtic Cross” (Appendix B) and “Elements, Timing, Pips, and Court Cards” (Appendix C).

The bibliography is outstanding. As a nonfiction author, I always try my best to give my readers a wealth of sources from which they can learn more about my subject. Louis does a fantastic job with this.

I imagine it goes without saying that if you are just getting started with Tarot or if you have decided you do not have any interest in incorporating astrology and/or numerology into your Tarot readings, this book is not a great choice for you. It is, however, the perfect book for someone like me – and I suspect there are quite a few of you out there! 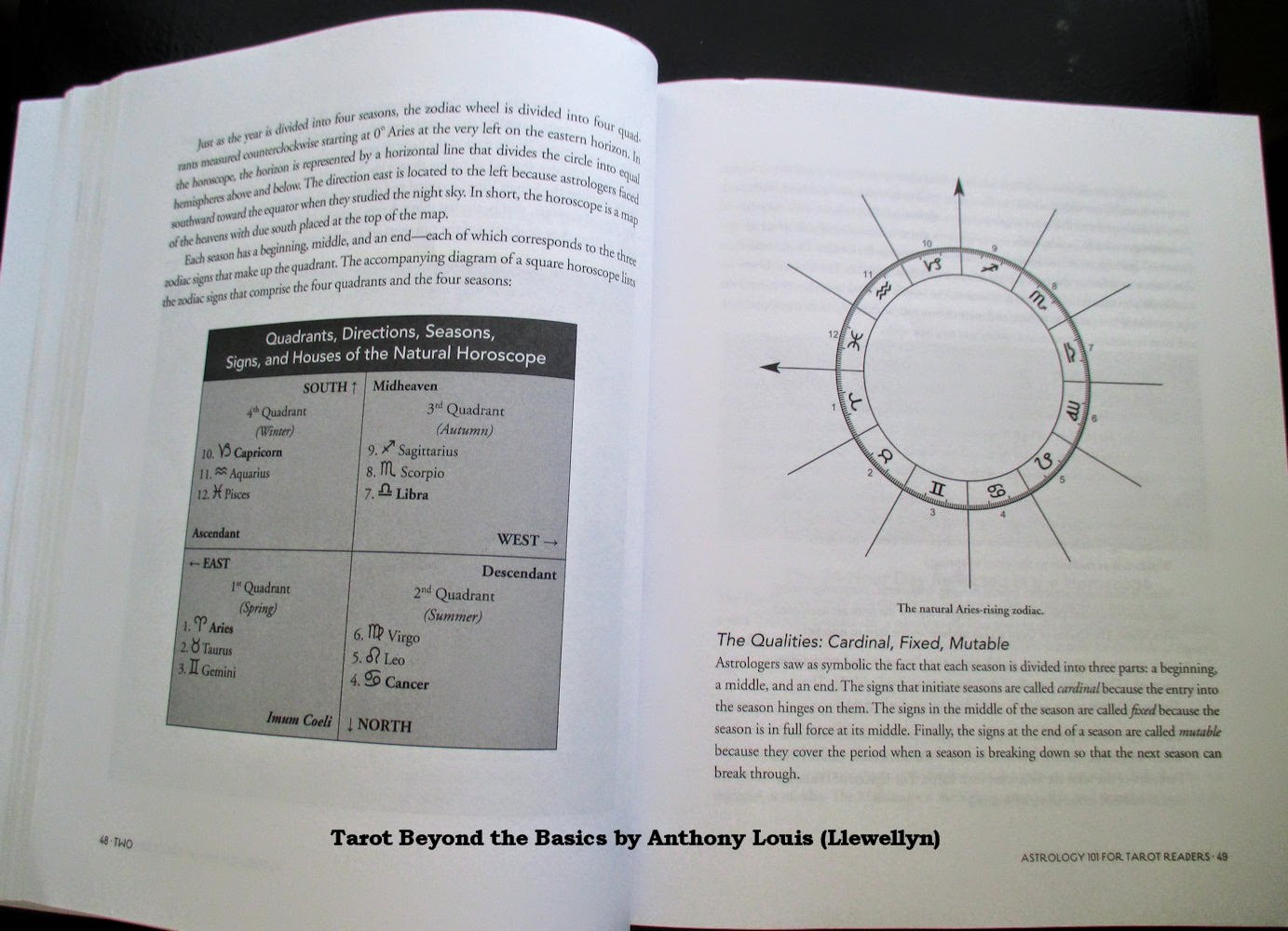 
“Take your tarot reading to a higher level. With an emphasis on tarot’s astrological influences and a number of detailed sample readings, Tarot Beyond the Basics shows the way to becoming an advanced practitioner. Here, Anthony Louis shares how-to instructions for working with reversals, number symbolism, intuition, the four elements, and the philosophical roots of tarot.

Explaining astrology for tarot readers clearly and in a way that makes sense, Louis shows how to use the tarot to give powerful readings that change people’s lives. The “real” tarot exists in the mind of each reader and is interlaced with his or her stories and experiences. The abundance of knowledge presented in Tarot Beyond the Basics is sure to make your readings come alive with meaning and significance.”

Anthony Louis (Connecticut) is a physician and psychiatrist. Astrology has been his avocation for more than 30 years. He has lectured internationally on horary astrology and has published numerous articles and books, including Tarot Plain and Simple and Horary Astrology: Plain & Simple (both published by Llewellyn). Articles posted on the Llewellyn web site: Astrology and Tarot, A Meditation and Pythagorean Numerology and Tarot. 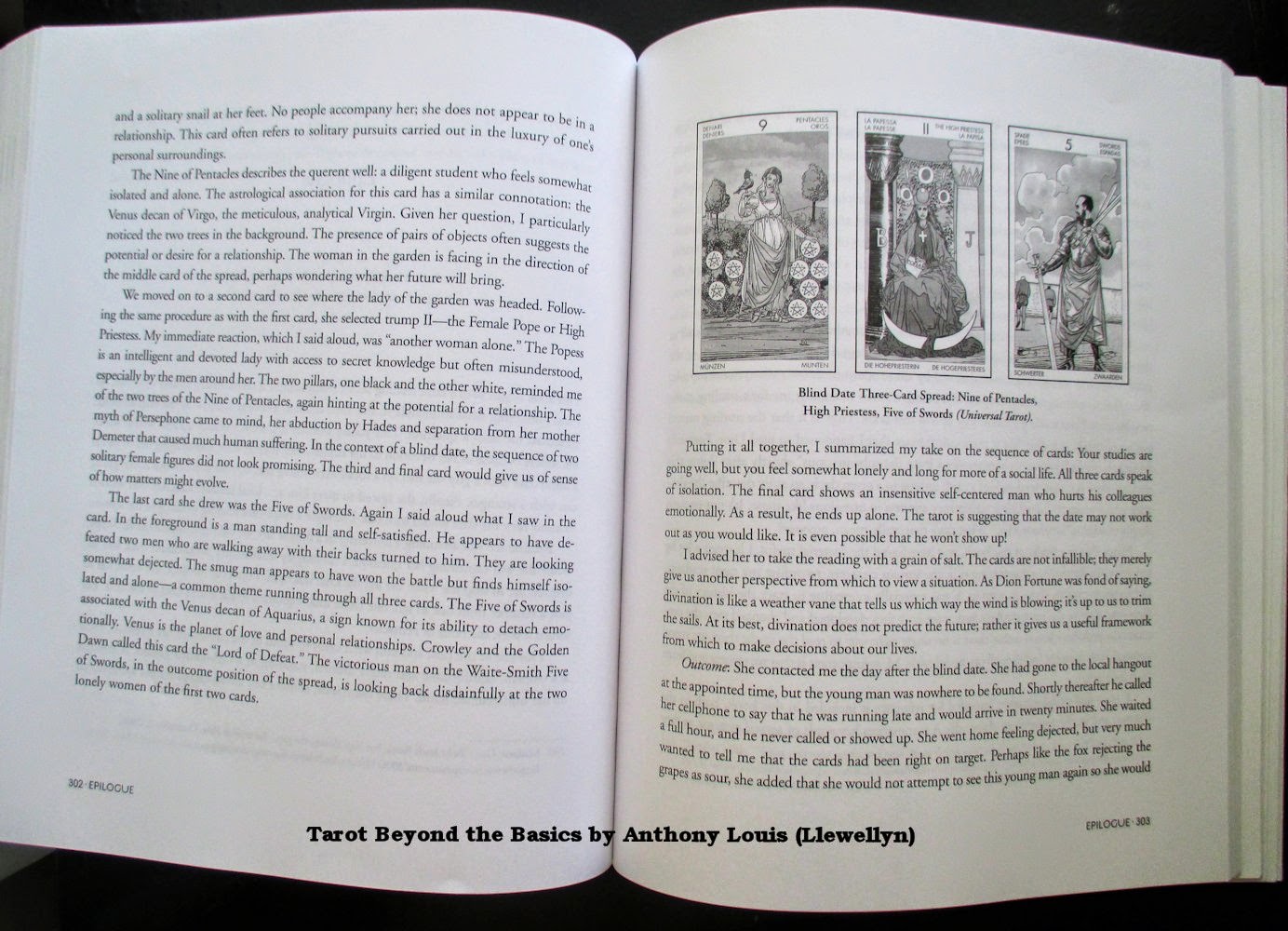 SOME OF MY FAVORITE QUOTES FROM THE BOOK

“The cards themselves are simply pieces of cardboard decorated with evocative images, that stimulate the imagination. The ‘real’ tarot exists in the mind of each reader and is interlaced with his or her life history and repository of experiences, or better said, with the view of reality the reader has created from those experiences.”

“The origin of [the Celtic Cross spread] was neither Celtic nor particularly related to the cross that shares its name.”

“Most astrologers do not believe planets ‘cause’ events but rather that important correlations occur between changing planetary patterns and life events on Earth. Correlation is not causation.”

“Every so often a story appears in the media claiming that scientists have discovered a thirteenth sign, which is tantamount to saying that scientific research has recently discovered that thirteen items make a dozen. Poppycock!”

“Perhaps it is heresy, but I believe that the tarot does not always tell the truth.” 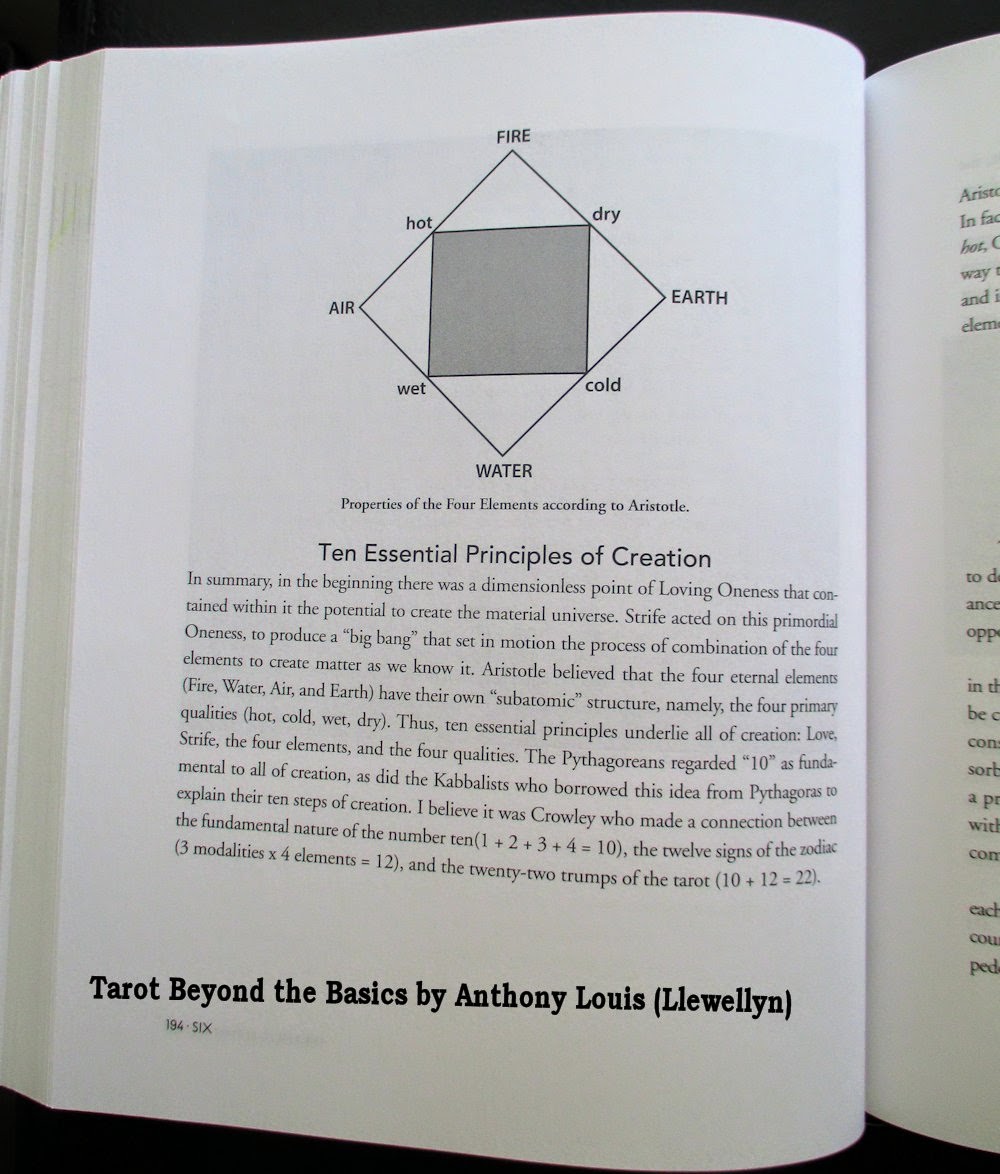 “Symbols can change in meaning over time. Their significance depends on the prevailing symbolic winds of the culture in which they appear.” 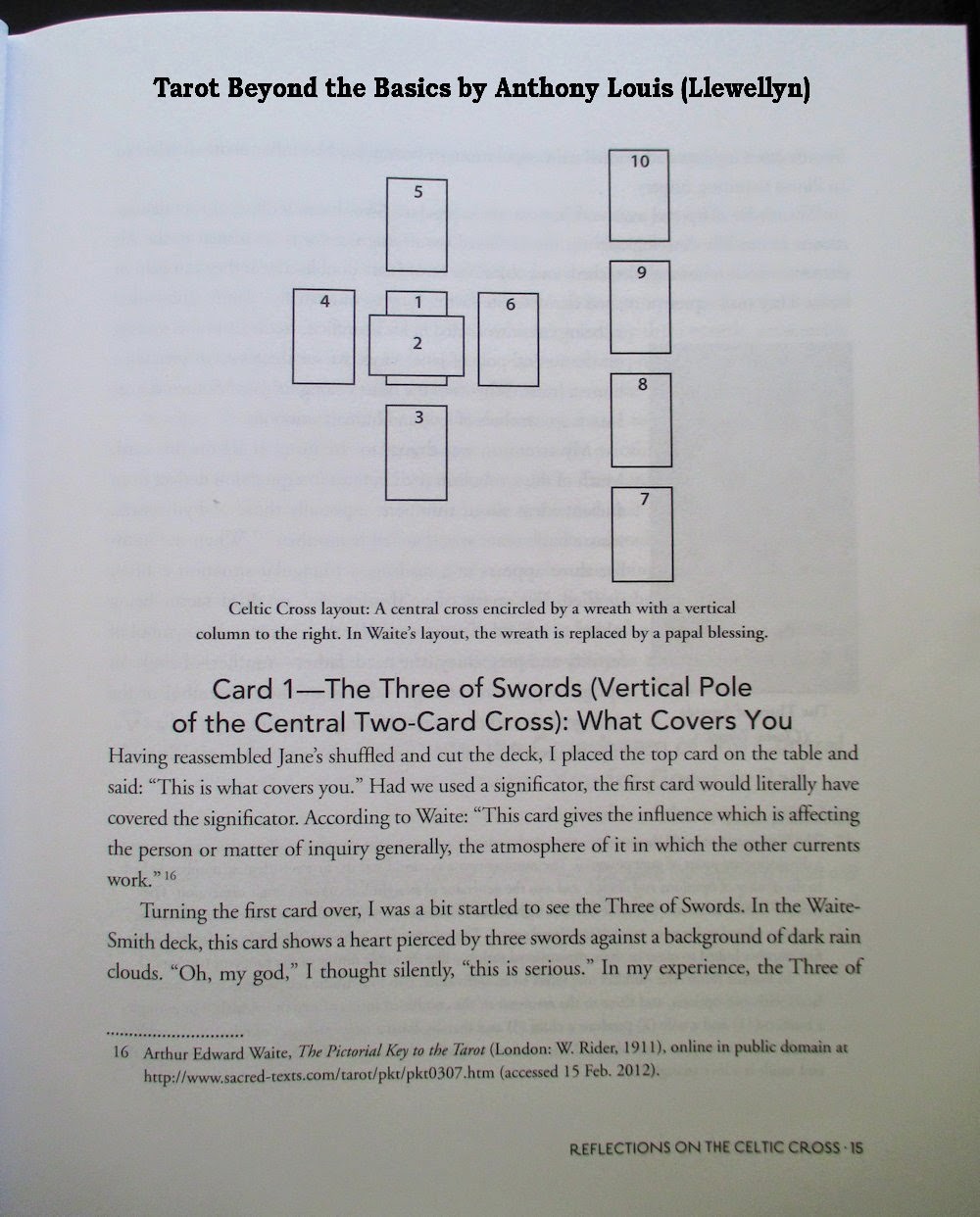