Journey Through My Decks: 6 of Pentacles

With the Winter Olympics being hosted in Russia, I decided to take Journey Through My Decks to Russia by way of the Fantastical Creatures Tarot by Lisa Hunt and D.J. Conway (U.S. Games Systems, Inc.) 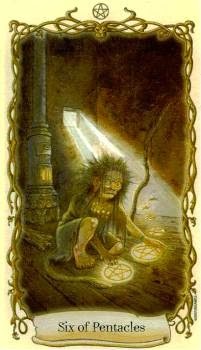 The домово́й -- domovoy (or domovoi) -- was a house spirit in Slavic folklore. The word dom means "home" or "house" in Russian. These creatures were said to inhabit the hearth and home, usually living under the doorstep or stove, or in the basement.

A domovoy was inherently neither bad nor good. He took his cue from the residents of the house and their behavior. If they deserved his protection, he gave it willingly. Although rarely seen or heard, the domovoy made his presence known in various ways and was said to be moody and mischievous. He could take on the appearance of the homeowner or one of the homeowner's ancestors or a variety of other creatures. As one can imagine, the domovoy was treated with great respect by the residents of the home in which he lived. When families moved, they invited the domovoy to move with them.

On the Six of Pentacles in the Fantastical Creatures Tarot, we see a domovoy creating magickal pentagrams to protect his human family and bring them good things. The traditional association of the suit of Pentacles with domestic, everyday matters in the material world is maintained here.

Book T* calls the Six of Pentacles “The Lord of Material Success” and relates it astrologically to the Moon in Taurus.

DMs provided by Conway: "Abundance and prosperity will enable you to help someone else in need. You will be able to repay debts."

* Book T The Tarot (an initiatory manual for the Order of the Golden Dawn) Comprising Manuscripts N, O, P, Q, R, and an Unlettered Theoricus Adeptus Minor Instruction, A Description of the Cards of the Tarot with their Attributions; Including a Method of Divination by Their Use.

About the deck: In the Introduction to the LWB for this deck, we are told that the mythical beings depicted in the deck seem to "fit into a niche between humans and gods, a kind of middleman of the astral realms." These mythical creatures can be "good and helpful, neutral, or evil and harmful." Conway encourages us to "use the energy of Fantastical Creatures for magick, meditation, and divination. . . as a tool to improve yourself and your life."