There are several awesome dragon-themed Tarot and Oracle decks out there. I have not created such a deck, but I have created dragon-themed jewelry and I wrote a children’s book featuring a dragon.

If you are interested in the jewelry, just go to my ETSY shop (Jewelry by Scotti) and type “dragon” in the search field. If you are interested in my children’s book, click HERE. I'm the author. The artist is the fabulous Christina Wald.


Okay, cross-marketing done. It’s time to look at dragons and how they are portrayed in various decks. First, however, allow me to share some information from one of my favorite books, A Natural History of Dragons and Unicorns by Paul and Karin Johnsgard (St. Martin’s Press).

The Johnsgards tell us that the word “dragon” is derived from the Greek word drakon, which may have come from derkomai (to look terrible or to gleam). According to the Johnsgards, there are three major types of dragons: lake dragons, flying dragons, and flightless dragons. These can be further divided into three types: The European Fire-Breathing Dragon, The Oriental Mist-Breathing Dragon, and The American Flightless Dragon.

Dragons can be found in mythology and lore from many parts of the world. The Scandinavians had their Krakens (actually giant squid). The Greeks had Typhon, who was so large that his head reached the stars. Another Greek dragon, Ladon, guarded the goddess Hera’s tree of golden apples. Others include Apep, the serpent-dragon of Egypt; Chiao, a marsh-dwelling Chinese dragon; Fafnir, a Norse dragon slain by Sigurd; Li, a hornless Chinese dragon; Makara, an Indian water dragon; and of course, Smaug, the dragon in the Tolkien sagas.

Then there's this guy:


Symbolically, dragons are known to represent benevolent energy in the Far East and malevolent energy in the West. In Asia (particularly in China) dragons represent supernatural power and the rhythms of the natural elements. Christianity was responsible in large part for the evolution of the dragon into a symbol of moral evils, disorder, and disbelief. (Dictionary of Symbols by Jack Tresidder / Chronicle Books)

My first dragon deck was the Dragon Tarot, created and illustrated by Peter Pracownik under the direction of Terry Donaldson (U.S. Games Systems, Inc.) The book that accompanies this deck states that the origin of the word dragon is from the Greek drakoni, which means “the seeing one.” Like the Chinese, the deck’s creator views the dragon as the ultimate symbol of knowledge and power. We are encouraged to look at the dragon “as a challenge for us to discover our own boundaries, and think about going beyond them.” ] 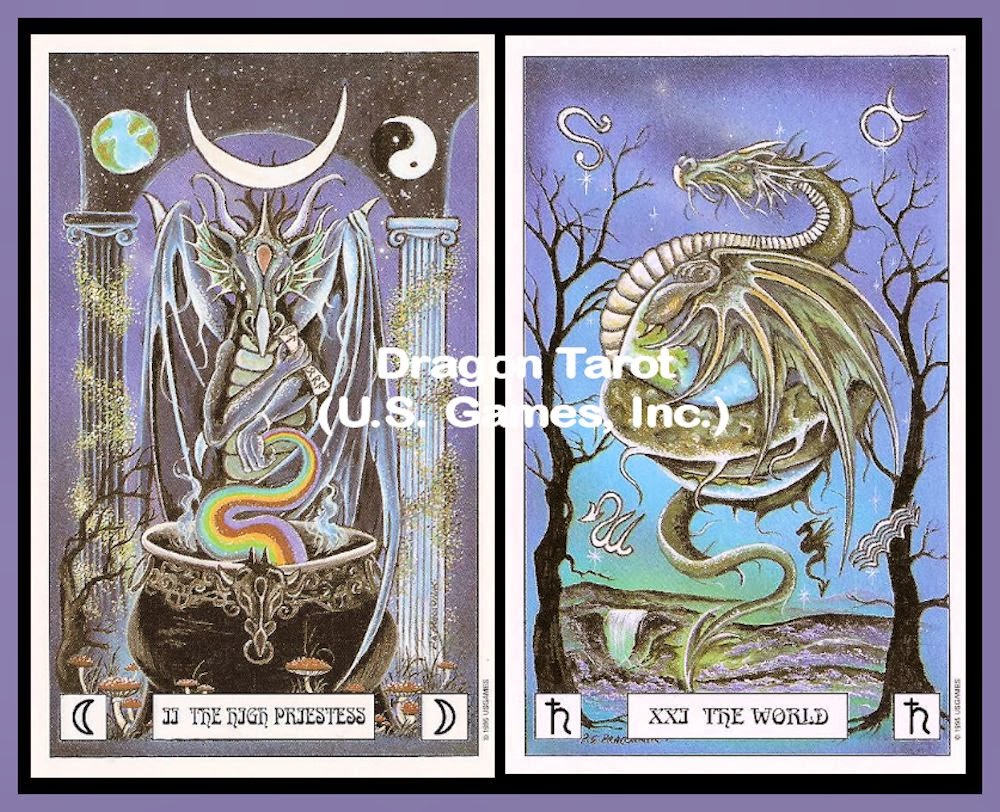 The dragons in this deck are flying dragons, somewhat similar to each other in appearance. The cards are colored in keeping with elemental associations for the suits. 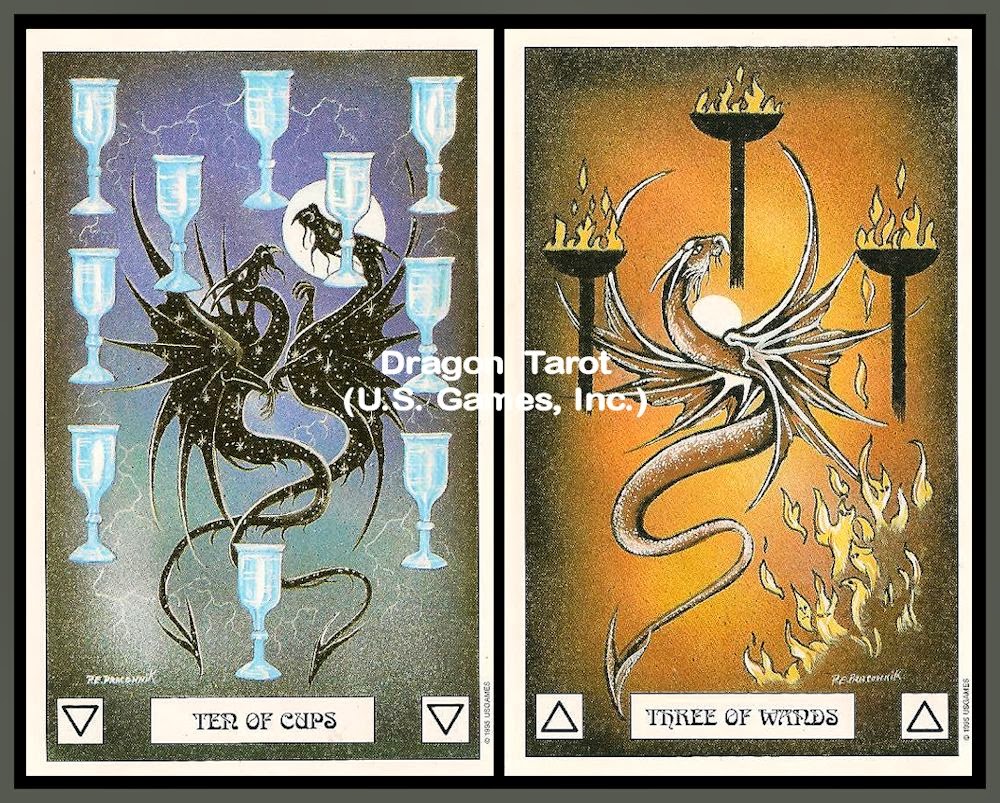 As you can see, astrological associations are incorporated into the Major Arcana cards in this deck, while the Minors incorporate the symbols for Earth, Fire, Air, and Water, as appropriate for the suit. 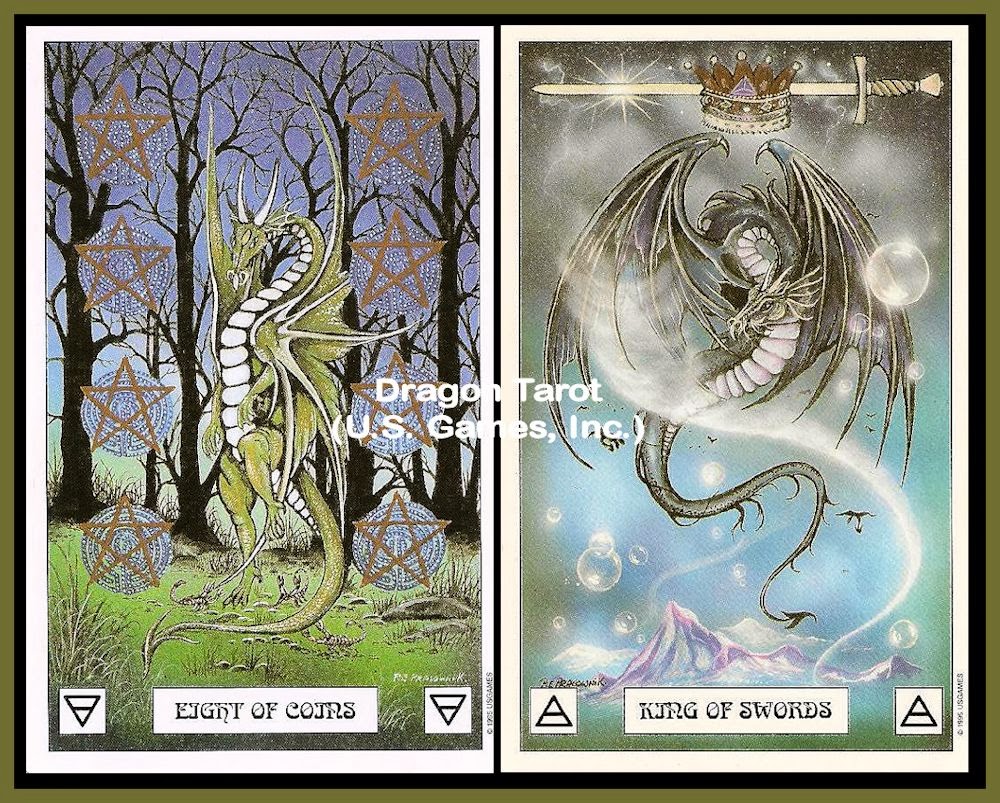 For the next entry in my Dragon Series, I will offer a bit more about dragons in general and a look at a different dragon-themed deck.