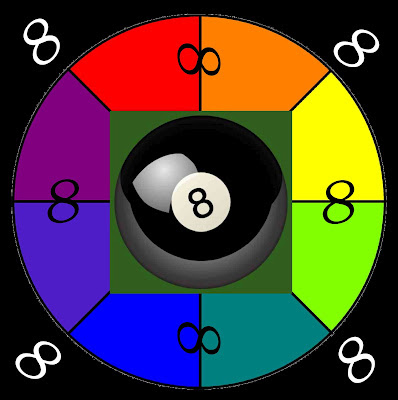 Tarot Cards: Strength or Justice, Eights of all suits

Writing about the occult meaning of numbers, Paul Foster Case gives the following keywords for Eight: "rhythm, alternate cycles of involution and evolution, vibration, flux and reflux, and the like." Case adds that "It represents also the fact that opposite forms of expression (that is, all pairs of opposites) are effects of a single Cause" and that Eight is "pre-eminently the number of magic and of Hermetic Science." (The Tarot: A Key to the Wisdom of the Ages, Macoy Publishing Company)

Gary Meister, CTM offers the key phrase "Success Through Hard Work" for the number Eight. He writes: In esoteric numerology, the Number Eight is a higher octave of the number Four (2 X 4 = 8).  Where four represents a solid foundation through reason and practical thinking and planning, Eight represents the successful culmination of this planning."

In his book Numerology: Key to the Tarot  (Whitford Press), Sandor Konraad gives the Keywords "ambitious, successful, self-destructive" for the number Eight.

Quoting from Numerology and The Divine Triangle  by Faith Javane and Dusty Bunker (Whitford Press): "8 will assume power, for it now has achieved control and responsibility in its chosen field. Recognition and financial rewards are bestowed, and expansion and growth in the business world take place. Under 8, karma is king. . ." Keywords: power, responsibility, financial rewards, good judgment, recognition."


In Anna Burroughs Cook's Tarot Dynamics system: "[Subject Card] Eight is a card for future renovation. 'Renovation' refers to opportunities and situations that have, or could potentially change your life." Anna Cook also notes, "Like the 8th House in Astrology, our 8s can often provide clues concerning the stability of our future, with anyone or anything that is important to us." (Tarot Dynamics Unleashed / Kima Global Publishers)

Because both STRENGTH and JUSTICE have been called Trump 8 (depending on what system is used in a deck), discussing how the Number Eight relates to both is somewhat complicated.

Konraad, who links Justice with Eight, writes that "The balance held in the left hand of Justice is the lesson of Arcanum VIII. . . The fact that Justice wields a sword in her right hand suggests that the lesson will be a painful one." As for the Minor Arcana Eights, Konraad views them as representing Imbalance in the area of life represented by the suit.

For Javane and Bunker, Key 8 is Strength. In this card, the life force is directed through suggestion. They write, "The woman is the subconscious mind controlling body functions and directing the amounts of vital force that the body receives. She also receives and acts upon suggestions from the conscious mind."

Anna Cook also associates Strength with the number Eight, noting that the Personal Strength of this Key is Fortitude and the Personal Weakness is Fear. Her keywords for Strength are Karmic / Renovation.

My keywords for the Number Eight are ambition, achievement, power, magic, and diligence.

I hope you enjoy these quotations I found that include the number Eight:

"Right now the thing that I have learned the most is to be grateful that I have finally gotten to a point where I am being paid to make films, after eight years." ~ Jim McKay (American Journalist)

"It took me about eight years to put together the program that I have been living for twenty years." ~  Marilu Henner (American Actress)

"I've been at Liverpool for eight years, and the time has come for us to start achieving." ~ Jamie Redknapp (English Athlete)

"Eight years involved with the nuclear industry have taught me that when nothing can possibly go wrong and every avenue has been covered, then is the time to buy a house on the next continent." ~ Terry Prachett (English Author)