Journey through My Decks: Page of Cups (by Zanna)


In this series of posts, I plan to discuss all of the Tarot cards in order, using a different deck for each card. Today I'm exploring the PAGE OF CAULDRONS from Tarot of the Old Path by Sylvia Gainsford (published by AGMuller). 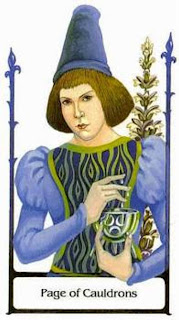 The suit of Cauldrons (Cups in more traditional decks) is associated with the element Water. In Tarot of the Old Path, the Page of Cauldrons wears a predominantly blue costume with a rippling pattern that suggests Water. In the book that accompanies this deck, Howard Rodway tells us that the style of the Page's headwear typically symbolizes meditation. His face wears a pensive expression. We notice that the Page's every hair is in place, which suggests perfectionistic tendencies.

The Page holds a goblet in his left hand, as "the long artistic fingers of his right hand shed three drops of water back into the container." (Rodway) These three drops and the three crescent moons on the goblet represent the three forms of the Goddess: Maid, Mother, and Crone. Behind the Page blooms an acanthus flower, which Rodway tells us denotes "one who has a love of beauty and art." My research tells me that the acanthus is also a common symbol of eternal life.

DMs from Rodway: "A young man or girl with light brown hair. A quiet intelligent youth. One who is studious and meditative. A perfectionist. Talented in the arts. An offer of service. Bearer of news. Loyal" Reversed, the Page of Cauldrons can represent "A charming person, but one who is inclined to be idle and critical. Bad news. Frustration. Distraction. Selfishness. Deviation."

About the deck: According to Howard Rodway, Tarot of the Old Path was developed "in recognition of the many card readers who are witches and initiates of Wicca, otherwise known as the Old Religion, the Craft or the Old Path B a nature-based religion and philosophy." Rodway writes that while he personally is not a Wiccan, he is very fond of this deck and has enjoyed working with it very much. I feel exactly the same way.