A Journey through My Tarot Decks: Three of Wands

In this series of posts, I plan to discuss all of the Tarot cards in order, using a different deck for each card. Today I'm exploring the Three of Wands from The Faery Wicca Tarot by Kisma K. Stepanich (illustrated by Renée Christine Yates, published by Llewellyn Worldwide). 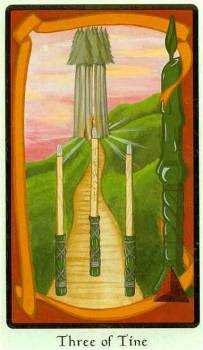 "The power of courage
is only the first step in the dance –
The second step
is dancing ego to Spirit –
This is a very hard step indeed,
for it takes action of the heart
to achieve success."
~ Kisma K. Stepanich ~
I am neither a Faery nor a Wiccan, so I hope you'll pardon any misstep I might make in discussing this deck.

Each suit in the Faery Wicca Tarot is associated with an OtherWorld city as well as an Element.  Tine means Fire, and the suit is linked with Findias: City of the South, Lugh's Spear.

Stepanich writes, "Working with the spear or wand talisman teaches the wisdom of solar power – strength, passion, will." At a mundane level, Fire cards represent "basic understanding of power and willpower, ego politics, aspects of commerce, conflicts. . .successes and failures, winning or losing. . . our pretenses."

In Stepanich's system, keywords for the number Three are "dimensional, conception, expression." The Three of Tine is titled "The Dance of Partnership." DMs provided by Stepanich are: "Destiny unfolding. Powers of creation, invention, commercial enterprises, and grand fortune."

On the card we see three wands positioned on a path leading into a stand of tall trees. I cannot be sure, but there appear to be flames burning inside that stand of trees. Orange and red – commonly associated with Fire – frame the image. An upright red triangle, represent the element Fire, sits in the lower right corner. The other dominant color is green – color of growth and fertility.

The symbols carved on the middle Wand appear to be runes. I think I can make out Ur (dramatic change and challenge, followed by a symbol that resembles a capital E and for which I can't find a meaning, followed by Ing (fertility), followed by Peorth (meaning not completely understood), followed by Nied (necessity). The "capital E" could be Eoh (Horse), which resembles a capital M but when turned on its side, could resemble an E. Not being an expert on runes, I will not elaborate at this point. The meanings I provided above are from Horik Svensson's book The Runes (Carlton Books Ltd.)

Rather than provide meanings for reversed cards, Stepanich offers four possible implications for any reversed card: (1) insight into the energy state of the querent, (2) the possibility of an event, (3) where an energy blockage is occurring, and (4) a warning of a challenge.

---------------
About the deck: The Faery Wicca Tarot consists of 83 cards – five of which are specific to this deck (one is The Power card and four are Gift of Faery cards). Kisma K. Stepanich writes that the deck "is based on the ancient Bardic system of understanding the universe and blends traditional tarot images with the mystical symbology of Modern Faery magick." In addition to drawing on traditional Irish myth, the cards contain ancient Gaelic or Irish alphabets and sacred symbols. Stepanich does not transcribe the alphabets, but leaves this to the reader "if that level of intimacy is desired."
on Tuesday, October 26, 2010