A Journey through My Tarot Decks: Ace of Wands

In this series of posts, I plan to discuss all of the Tarot cards in order, using a different deck for each card. Today I'm exploring the Ace of Wands from The Shakespearian Tarot (book by Dolores Ashcroft-Nowicki; illustrations by Paul Hardy; published for Caxton Editions by Diamond Books, London). 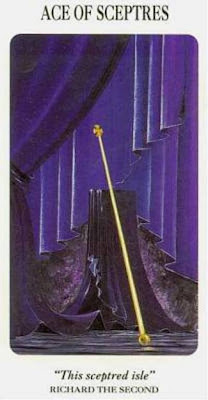 "This royal throne of kings, this scepter'd isle,
This earth of majesty, this seat of Mars,
This other Eden, demi-paradise,
This fortress built by Nature for herself
Against infection and the hand of war,
This happy breed of men, this little world,
This precious stone set in the silver sea,
Which serves it in the office of a wall,
Or as a moat defensive to a house,
Against the envy of less happier lands,
This blessed plot, this earth, this realm, this England..."
— William Shakespeare, King Richard II, Act 2, Scene 1 —
Sorry, but I just had to quote that whole section of John of Gaunt's speech, I have always liked it so much!

In The Shakespearian Tarot, the suit of Sceptres is comparable to the suit of Wands in traditional decks. On the Ace of Sceptres, Dolores Ashcroft-Nowicki gives us the Sceptre of England, leaning against a velvet-covered pedestal. The back cloth and front curtain are rich, royal purple. The Wand is gold, the color of fire and of glory. "This is a Wand, a Rod of Power," Ashcroft-Nowicki writes, "...a symbol of status as ancient as the idea of Kingship itself."

Act 2 of The Tragedy of King Richard the Second finds Richard's uncle, John of Gaunt, conversing with the Duke of York. Gaunt is dying, and waits impatiently for the appearance of Richard, whom he intends to counsel on a number of issues. "Though Richard my life's counsel would not hear," he says, "My death's sad tale may yet undeaf his ear." The words quoted above ("This royal throne of kings, this scepter'd isle...") are spoken shortly before Richard arrives.

Although the sceptre of kingship belongs to Richard at this point in the play, his power has declined. In two years, he will be dead.

The Ace of Sceptres refers to the promising start of Richard's reign. Born in 1377, he ascended to the throne at age ten and married Anne of Bohemia when he was fifteen. She died while still quite young. It was said that Richard never really got over her death. He himself was murdered in 1399 after being deposed.

To me, the moral of this story is that no matter how promising a new beginning is, it is only that: a beginning. The manner in which we use the energy of the fiery Wands (passion, confidence, creativity, aggression, life force, strength, enterprise) and the approach we take to our struggles, victories, and defeats are what matters at the end of the day.


Please note: My elemental keywords and color associations are based on personal experience and many different sources accessed over a period of several years.

About the Deck: Dolores Ashcroft-Nowicki combined her love of Shakespeare with her love of Tarot to create The Shakespearian Tarot. Illustrated by Paul Hardy, the deck was developed by Ashcroft-Nowicki over a two-year period during which she combed her “battered leather-bound copy of the Bard. . . looking for just the right scene, just the right words to match the meaning of the cards.” She chose quotes to match the pictures and meanings as closely as possible. Her goal was to create a working tool rather than a collectors item.
on Tuesday, October 12, 2010