Let's see what we can discover about the astrological implications of the SEVEN OF WANDS. 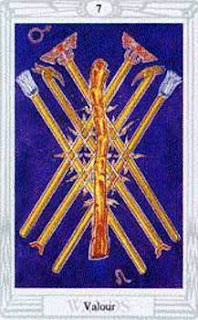 Thoth Tarot by Aleister Crowley
For Crowley (and the OGD), the Seven of Wands represents the energy of the planet Mars and the zodiac sign Leo. Crowley titles the card "Valour." The planet Mars was called "The Lesser Malefic" by ancient astrologers, which suggests destructive influence. However, Mars energy is viewed these days as having constructive qualities as well. Crowley writes of the Mars/Leo combination: "Leo is still the Sun in his full strength, but the marks of decadence are already to be seen. It is as if the wavering fire summoned the brutal energy of Mars to its support." Hajo Banzhaf and Brigitte Theler (in Keywords for the Crowley Tarot) describe the energy of the card as: "Courage, decisiveness, and willingness to engage in conflict (Mars) in connection with self-confidence certain of success (Leo)." 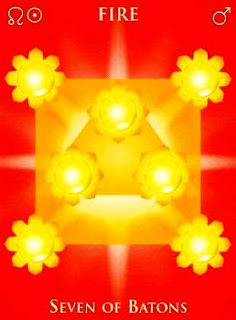 One World Tarot by Crystal Love
Crystal Love associates the Seven of Batons with the third subdivision of the sign Leo, with the Sun as the natural ruler and Mars as the subruler. She writes: "Leo with subruler of Mars indicates a strong, forcible nature, desiring to rule."

A.E. Thierens, PhD. (Astrology & the Tarot)
Thierens describes the Seven of Wands as having the energy of "Air on the Seventh house." This makes sense in that the Seven of Wands is the Seventh card in the suit of Wands. In astrology, the Seventh house is associated with the zodiac sign Libra, an Air sign ruled by Venus. Based on this association, Thierens describes the energy of the card as: "that of the airy Libra, house of relationship, marriage, meeting of the Self and the Not-self, which rules contracts, books and manuscripts." Keywords include discussion, negotiation, conference, conversation, correspondence, words and language. (Note: The system devised by Thierens is radically different from that of the OGD. I will not go into detail here, but will simply provide the astrological associations for the card under discussion. If you are interested in learning more about this system, I recommend the book referenced above.) 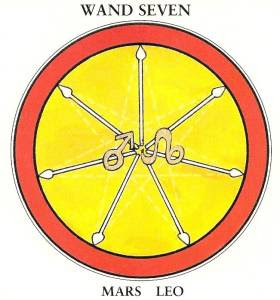 The Mandala Astrological Tarot by A.T. Mann
Like the OGD, Mann's deck associates the suit of Wands with the element Fire. Mann describes Wands Five, Six, and Seven as "The Suns of Leo." Wand Seven is assigned to the Third Decan of Leo -- Mars in Leo. On the King Scale of Color, the color linked with Mars is red; the color linked with Leo is yellow. Mann's keywords for Mars are "will, desire, energy, enthusiasm, temper, arrogance, passion." For the sign Leo, his keywords are "Ripening; summer heat; full energy; extroversion; harvest; power; self-expression; personal love; games; pleasure; ruling; vanity; proudness." 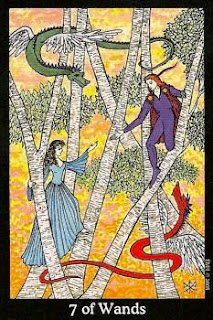 The Whispering Tarot by Liz Hazel
Liz Hazel's suit of Wands is the suit of the Fire element, embodying "ambition, vigor, creativity, travel, high spirits, and energy." Her use of the colors red, yellow, and orange is a lot more subtle than what we see in the other cards in this set. Like most of the others, Hazel associates the Seven of Wands with Mars/Leo. In her excellent book Tarot Decoded, Hazel notes that in astrology, Mars ranges "from useful aggression to senseless violence, depending upon the favor or misfortune of placement in the chart." In the Seven of Wands, Mars can be "positive in taking the initiative to fulfill ambition or negative in impulsive haste and conflict. He can be defender or perpetrator."

I feel that the Mars-Leo association for the Seven of Wands (in decks based on the RWS, at least) works very well to convey a sense of dominance, courage, and determination. As often happens, the Air-Libra association presented by Thierens just doesn't resonate with me, based on my experiences with the Seven of Wands.