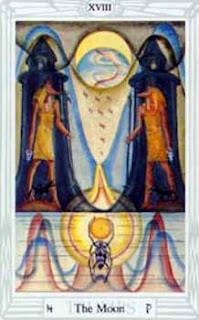 Thoth Tarot by Aleister Crowley
The OGD and Crowley attribute The Moon card to the zodiac sign Pisces, a mutable Water sign known for being emotional, romantic, impressionable, adaptable, imaginative, and intuitive. Crowley writes: "Pisces is the last of the Signs; it represents the last stage of winter. In their book about the Thoth deck, Keywords for the Crowley Tarot, Hajo Banzhaf and Brigitte Theler note that Pisces is the "last sign of the zodiac, which leads to the new birth of the year." 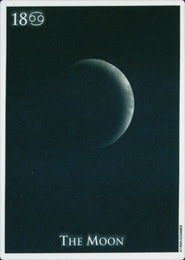 One World Tarot by Crystal Love
In this deck, Crystal Love associates The Moon (Trump 18) with the cardinal Water sign Cancer. In astrology, the Moon rules Cancer. Love writes: "The Moon can represent the unconscious drives, the emotions, the mother, and the nurturing principle."

A.E. Thierens, PhD. (Astrology & the Tarot)
Thierens associates Trump 18, The Moon, with the Moon. Thierens writes: "Everything that has been said in astrology about the Moon might be repeated here, as there exists no controversy whatever on the point of identity. . . This card consequently means the life of the soul in particular, the feelings and sentiments, emotions (not only fear, etc.), changes wrought in existence by them, water and the female element in general." 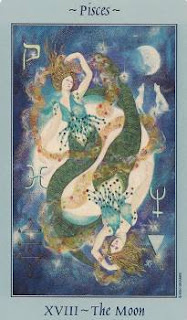 The Celestial Tarot by Brian Clark
Clark titles The Moon card "The Womb of Pisces." He writes: "Celestial Tarot links the symbol of the Moon and the sea together by representing the Moon card as Pisces, the last sign of the zodiac representing the vast watery domain of the sea. . . Astrologically, the Moon relates to the tides. As an astrological image, it symbolizes innate emotional patterns, habitual responses, and underlying motives." 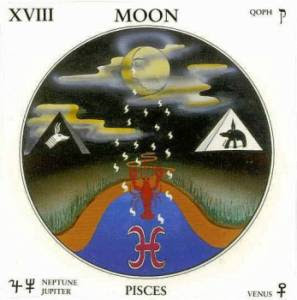 The Mandala Astrological Tarot by A.T. Mann
Mann associates Trump 18, Moon, with the sign Pisces. He writes: "Pisces is the receptive, psychic and mystical openness of those having direct contact within, ruled by Neptune indicating a sensitivity to moral choices. . . Jupiter ruling is meditation upon the hidden forces of nature. Venus is exalted in Pisces showing the integration of positive and negative forces through love which the path requires." (Note: Traditional astrology assigns rulership of Pisces to Jupiter; modern astrologers often assign rulership to Neptune or co-rulership to Jupiter and Neptune.) 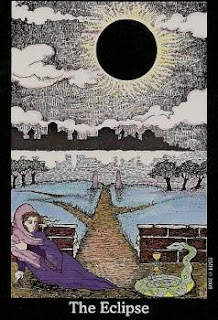 The Whispering Tarot by Liz Hazel
Liz Hazel titles this card The Eclipse, and lists the attribution as "Pisces; waning moon, from three days after full to three days before new." She writes: "The title of 'Eclipse' was chosen to differentiate this card from the normal cycles of the Moon, as opposed to the eerie phenomenon of eclipses."

I really have no problem with any of the above-mentioned attributions for Trump 18.